[Editor’s Note: Pennsylvania Act 266 offers the Commonwealth an open door to transformative economic benefits; an approach unlike any other Northeast state.]

Pennsylvania Governor Tom Wolf signed into law House Bill (HB) 732 in July, 2020. It is a bill that grants future tax credits to companies willing to build brand new petrochemical plants in the Keystone State–plants that use huge quantities of Marcellus Shale gas (see Victory Lap! Gov. Wolf Signs Tax Break Bill for New Petchem Plants). Wolf vetoed a prior version and got a lot of negative feedback, so when the bill came around a second time he signed it. HB 732 became Act 66 in PA’s codes and regulations. Act 66 is meant to attract big petrochemical plants to northeastern PA.

So far, only one such facility (already in the works prior to the new law) has taken advantage of the Act 66 law. Efforts are underway, though, to change that. 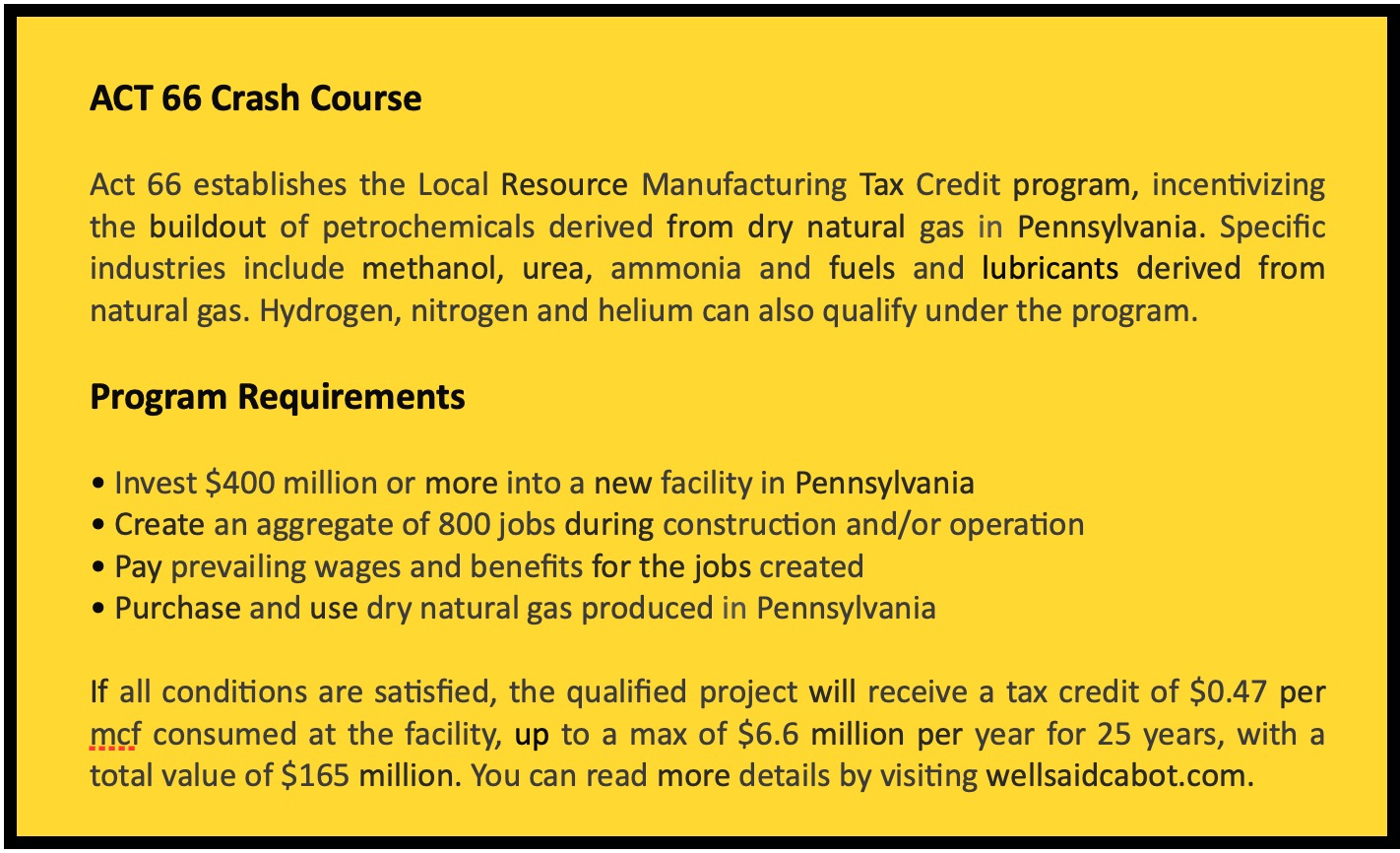 Act 66 requires new petchem plants to invest at least $400 million and create at least 800 temporary and/or full-time jobs. In return, each plant (up to four total) will get a maximum $6.6 million in tax breaks each year for up to 25 years.

One of the prime movers and shakers in getting the bill passed was Sen. Yudichak from Luzerne County (Wilkes-Barre). Yudichak lobbied hard for the law because some of the plants that will get built, will get built in or near his district in northeastern PA, attracting hundreds of new jobs and millions in investment. In March Yudichak chided the Department of Community & Economic Development (DCED) for not doing a better job of promoting the tax credits available under Act 66 to national site selectors. Given Wolf vetoed the first version of the bill, one can assume he’s not interested in promoting it.

We can’t wait for the government (in particular the inept Tom Wolf administration) to do the job for us. Marcellus companies, including Cabot Oil & Gas, are rallying to the cause to promote Act 66. Each one of these massive petchem plants has the potential to use huge amounts of natural gas, keeping the gas in the region where it’s extracted. It’s a win/win/win for everyone, as reported in Happy ValleyIndustry:

Last July, Act 66, a tax credit program incentivizing the buildout of petrochemicals derived from dry natural gas in Pennsylvania, was signed into law. It’s being called a catalyst for significant job growth in Pennsylvania, as well as investments estimated at a minimum of $400 million.

“The bottom line is that Pennsylvania is blessed with an abundant resource of natural gas,” says George Stark, ?director, External Affairs for Cabot Oil & Gas. “We have the second largest deposit of natural gas in the United States, but other states are doing a much better job of attracting petrochemical plants to invest there. This legislation is a pronouncement to the U.S. and the world that Pennsylvania is a good investment.”

He says that, previous to Act 66, Pennsylvania lacked the incentives to entice companies to base their dry natural gas petrochemical production within the state. “Ohio does a tremendous job attracting energy business, as does West Virginia and, of course, Texas. Because of Pennsylvania’s corporate net income tax, road tax and employment tax, basing production here was not as attractive to businesses.”

Simply put, the act establishes the Local Resource Manufacturing Tax Credit program, which incentivizes the buildout of petrochemicals derived from dry natural gas in Pennsylvania. Specific industries include methanol, urea, ammonia and fuels and lubricants derived from natural gas. Hydrogen, nitrogen and helium can also qualify under the program.

To qualify for the tax credit, a company must:

If these conditions are satisfied, the qualified project receives a tax credit of $0.47 per mcf consumed at the facility, up to a max of $6.6 million per year. The qualified firm can claim this tax credit each year for 25 years, with a total value of the credit over 25 years of $165 million. The credits can be used to offset up to 20% of the qualified firm’s PA liabilities, and remaining credits can be sold through DCED to other PA businesses to offset up to 50% of the purchaser’s PA liabilities. In fact, the language in the bill encourages the tax credit to be sold or transferred to downstream businesses that might use the petrochemicals as a feedstock to make another product in PA or to upstream businesses engaged in the extraction of dry natural gas in PA.

The act also promotes forward-thinking energy production. “The upside is that clean versions of energy will be utilized,” Stark says. He points to Shell’s Pennsylvania Petrochemicals Complex near Pittsburgh that focuses on zero waste and beneficial reuse. “These are the things that can be set up today to grow a much cleaner manufacturing tomorrow. There’s only one stratosphere, and it’s our job to protect it.”

Stark says the act ties into President Biden’s “Build Back Better” plan for America’s workers. “This is the transition to create products here in Pennsylvania, and we need to do it now. This is the turning point.” 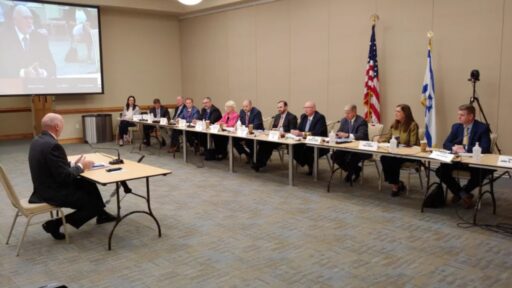 Perry Babb, chairman and acting CEO of KeyState Natural Gas Synthesis, testifying to the combined Major Policy Committee panel consisting of members of both the state House and Senate about the benefits of Act 66. Photo: PA Senate GOP

Senator Yudichak sponsored the legislation in the Pennsylvania Senate, where he chairs the Senate Community, Economic & Recreational Development Committee.

“Act 66 is the byproduct of a thoughtful, bipartisan compromise with Gov. Tom Wolf and the legislature that proves the government can deliver on the promise of economic opportunity and set the stage for transformative economic growth across a wide swath of industries from the construction trades to manufacturing and energy jobs,” Yudichak said.

When Perry Babb, chairman and acting CEO of KeyState Natural Gas Synthesis, testified to the combined Major Policy Committee panel consisting of members of both the state House and Senate, he echoed what Yudichak said. “Act 66 is a game changer for Pennsylvania because it demonstrates that there is state support for this kind of project that’s done responsibly.”

Babb’s company, KeyState, was the first company to step up to utilize the credits. KeyState has already begun development of a 7,000-acre, gas-ready site in Clinton County where low-carbon ammonia (urea) and a diesel exhaust treatment will be manufactured, and the process of carbon capture and storage will be perfected. 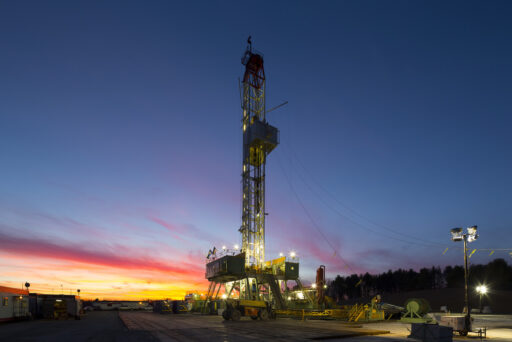 “It’s our turn,” he said to the committee. “It’s Pennsylvania and Marcellus’s turn to produce gas and, yes, we can put it in a pipeline. But let’s make something with it that creates major, long-term jobs that have a major, long-term economic development. You know, Pennsylvania’s a green state. It’s green everywhere you look. But we could use some of that other kind of green as well, that permanent long-term jobs would create.”

“Agriculture is the biggest industry in this state, and we need ammonia in our fertilizer,” he adds. “Today’s ammonia is imported from overseas. We have an opportunity to build our economy, help our existing industries and get on an equal footing with other energy-rich states. We don’t need to be dependent on the foreign market to supply us with the things we need every day.”

Stark agrees. He says that the act “is a great equalizer.” “It puts us on par with the Gulf Coast in Texas, and with Ohio. It helps to offset the extra cost of basing an energy business in Pennsylvania.” He says that his job is to have conversations about how Pennsylvania can prosper.

“We help to connect the dots,” adds Stark. “The pandemic has shown us that we need PPE, hand sanitizer, plexiglass, valves, syringes. All of those things use petrochemical byproducts. And Pennsylvania’s workers’ best hope is jobs. Why not make those jobs happen here? Why not retool facilities within Happy Valley into manufacturing centers and make this county a leader in petrochemical manufacturing?”

Since Act 66 was signed into law last summer, Stark says they’ve seen an uptick in activity throughout the state. “We are working with a variety of companies and economic developers in northeast [and] north central regions as they look into site selection.” They anticipate the number to increase as more companies find out about the financial incentives to base their business in centrally-located Pennsylvania, where more than one third of the population of the U.S. is within a few hours’ drive.

And as the phones ring, they are already looking into the future. “Short term, companies are exploring their options in Pennsylvania, kicking the tires,” Stark says. “Five years down the road, dirt is being moved. There are jobs waiting for students when they graduate from technical programs. Ten years? The sky’s the limit. Built properly, this will take off. Clean energy will be able to be produced. We will be able to compete in the hydrogen economy with Texas. These are all the things we are setting up today.”

Editor’s Note: Remember, Act 66 is about future tax credits in return for major new investments in the Commonwealth that would not have happened without the credits. Therefore, this is a program intended to create future tax revenue along with jobs today.