[Editor’s Note: Though the PennEast Pipeline is dead for now, the Adelphia Gateway project, backed by one of the same entities, is full speed ahead to deliver gas to Philly.]

New Jersey Resources’ Adelphia Gateway project is a plan to convert an old oil pipeline stretching from Northampton County, PA through Bucks, Montgomery, and Chester counties, terminating in Delaware County at Marcus Hook, into a natural gas pipeline. Does the cancellation of the PennEast Pipeline have any ramifications for finishing Adelphia Gateway? Fortunately, no… 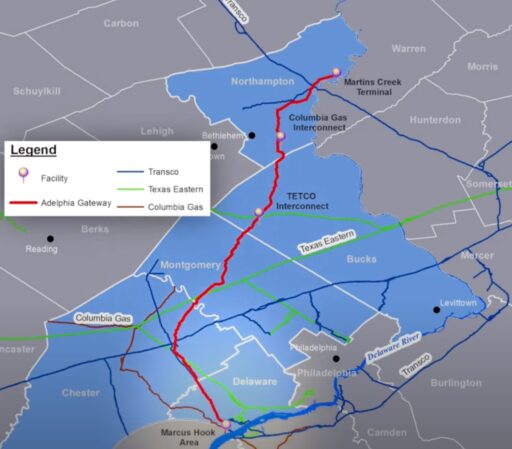 PennEast Pipeline is canceled, but another natural gas pipeline project touching the Lehigh Valley is proceeding as planned.

It “is independent of PennEast and is not impacted by the recent decision,” a spokeswoman told lehighvalleylive.com last week.

PennEast announced Sept. 27 it “has ceased all further development” of a brand-new 120-mile pipeline linking Pennsylvania’s Marcellus Shale natural gas-production region to Mercer County, New Jersey. The decision came in the face of continued resistance on the New Jersey portion of the line.

Adelphia Gateway is a subsidiary of NJR Pipeline Co., which itself is owned by New Jersey Resources Corp.

Adelphia bought these former Interstate Energy lines from Talen Generation LLC for $189 million and is building $143 million worth of new facilities, for a total estimated project cost of $332 million.

These figures and additional details for this story come from the Federal Energy Regulatory Commission, particularly its December 2019 order authorizing the project through a “certificate of public convenience and necessity” and available from FERC’s eLibrary. Adelphia also received permits from the Pennsylvania Department of Environmental Protection.

The project is designed to tie-in to existing pipelines and carry natural gas for domestic use, Adelphia Gateway says.

Zone North went into service Jan. 13, 2020, comprising about 35 miles of the pipeline that was converted in 1996 to deliver natural gas. That section extends from an interconnection with Texas Eastern Transmission Co. LP in Bucks County to the Martins Creek terminal. This zone also includes the 4.4-mile-long pipeline from an interconnection with a line operated by Transcontinental Gas Pipe Line Co., or Transco, to the Martins Creek Terminal.

Adelphia anticipates putting additional facilities into service by the end of 2021, according to the spokeswoman, Ivana Wolfe.

Primarily through hydraulic fracturing, or fracking, of Marcellus Shale, Pennsylvania as of 2019 generated nearly 7 trillion cubic feet of natural gas, becoming the second-biggest producer of the fuel behind Texas, according to the U.S. Energy Information Administration.

Opponents of the project include the Delaware Riverkeeper Network, which as part of 737 pages of comments in February 2019 described FERC’s environmental assessment of the project as “woefully inadequate,” according to the documents on file with the federal commission. The network also fears the gas will be transported to Marcus Hook for export overseas, and was not alone in airing this concern to the commission.

“Clean Air Council notes that the Marcus Hook Industrial Complex, which forms a terminus of the project, is a large, international export terminal for hydrocarbons, including crude oil and natural gas liquids,” states a FERC review of comments on the project.

Adelphia Gateway, in a fact sheet on its website, states: “Adelphia Gateway has no plans to ship natural gas offshore. The natural gas transported in the pipeline will be used by customers in the Greater Philadelphia area and the surrounding region.”

FERC, in responding to opponents as part of approving the project, states that while it has no jurisdiction over exporting or importing natural gas: “Allegations that the project is not needed because gas that is transported by it may be exported through an LNG terminal are not persuasive. There is no evidence in the record that indicates that the project will be used to transport natural gas for export. A number of the project shippers are end users, which will locally distribute gas or use it to generate electricity.”

On the environmental front, Adelphia defends the project’s impact as minimal since it is converting an existing pipeline: “A majority of the work proposed for the project will be in previously disturbed areas or in paved roadways. We have completed environmental site assessments, including cultural, biological and wetland surveys.”*

The Federal Energy Regulatory Commission (FERC) issued final approval for Adelphia Gateway in December 2019 (see FERC Issues Final OK for Southeast PA Adelphia Gateway Pipeline). Thank God FERC approved the project during the Trump administration or it never would have happened. Given FERC’s prior approval, FERC functionaries (not the commissioners themselves) gave permission for the project to begin construction on the final pieces in June (see Adelphia Gateway Pipe Near Philly Gets FERC OK to Finish Constr.). The project is supposed to be done by the end of this year. Let’s hope that happens.

Editor’s Note: It is important for readers to remember the Clean Air Council and Delaware Riverkeeper are sister groups funded by the same uber-rich gentry class special interests; the likes of the Heinz Endowments, the William Penn Foundation and a descendant of wealthy socialist Vice-President Henry Wallace. These folks would like nothing better than to stop Adelphia Gateway, despite the huge benefits it will provide to everyday Americans, because it might infringe on their own pampered lifestyles. This ruling class is what killed the PennEast and will destroy everything if we don’t restrain the power of their tax-exempt foundations.