Alberta Solar and Wind Gave Only 2.5% of Capacity When Vital!

Alberta is trying to replace coal with a combination of gas with solar and wind but the latter are contributing almost nothing to the project or energy security!

Brian Zinchuk is the editor and owner of Pipeline Online, a great blog about Canadian energy issues and, specifically, pipelines. I’ve followed it for some time and Brian has allowed as to repost his excellent material here. One of his latest posts offers up some real world data on the performance of solar and wind when they are most vital to energy security and it’s absolutely pitiful. Solar and wind, in fact, contributed only 2.5% of its rated capacity, which is just more evidence why they should be called unreliables.

Read the whole post for all the details, but here are the key points unearthed by Brian and they are simply astounding:

On Dec. 31, New Year’s Eve, it was cold across Alberta and Saskatchewan. On that day, TransAlta, one of Alberta’s largest power generating companies, announced it had completed its conversion from coal to natural gas. It was also shutting down the Highvale coal mine, west of Edmonton. 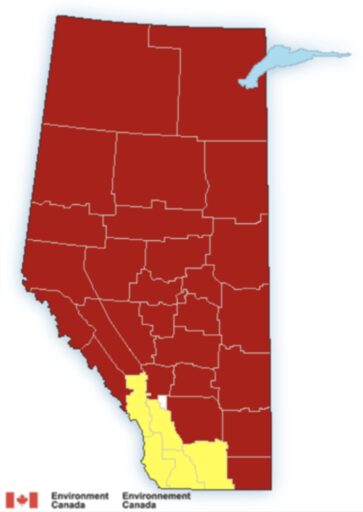 The red indicates extreme cold weather warnings across most of Alberta at 1 p.m. MST on Dec. 31, 2021. Source: Environment Canada.

Their release noted, “In aggregate, TransAlta has retired 3,794 megawatts of coal-fired generation capacity since 2018 while converting 1,659 megawatts to cleaner burning natural gas. This achievement, coupled with TransAlta’s growing and diversified generating portfolio, including hydro, wind, solar and battery assets, helps position TransAlta to be a highly competitive provider of reliable, low and zero-emitting electricity for customers in Canada, the United States, and Australia.”

About that wind and solar:

The AESO website revealed some literally cold, hard facts that weren’t in the TransAlta press release. As of noon, the TransAlta Keephills Unit 1, which was scheduled to retire that very day, was still putting out 302 megawatts, of its 395 megawatt rated capacity. At the same time, Alberta’s entire fleet of 13 grid-connected solar facilities, rated at 736 megawatts, was contributing 58 megawatts to the grid. The 26 wind farms, with a combined rated capacity of 2,269 megawatts, was feeding the grid 18 megawatts.

Did I mention it was cold across Alberta? And that wind turbines must shut down at -30 C, or they could shatter from the cold?

So, the total contribution of ALL solar and wind, at noon, was 76 megawatts out of a theoretical 3,005 megawatts of supposedly green, renewable energy…

That wind and solar power energy can’t be green, and it can’t be renewable, if it doesn’t exist. It’s not even hot air, because at least you could duct that through a generator. It’s theoretical. That giant gap of nearly 3,000 megawatts between the installed based and actual production simply is not there. It’s vaporware, masquerading as feel-good power that the earthmuffins feel is our salvation.

It’s hard to express the reality of solar and wind in more succinct way. Solar and wind are simply unreliable and in inverse proportion to the need for the energy they might deliver. As Brian explains it is essential that for each and every megawatt of solar and wind power installed, you absolutely must have reliable backup generation, principally in the form of natural gas-fired power generation.” And, for the prescient, that means we don’t need solar and wind at all because it is duplicative, makes no economic sense and only detract from the efficiency of gas, which is generally dispatchable and requires no backup.