All-the Above Is No Energy Policy; It’s Merely Politics

[Editor’s Note: This wonderful post addresses a human weakness; that we tend to compromise to save political face when we shouldn’t. “All-the Above” is simply ignorant energy policy.]

The Net Zero energy policy pursued by the current administration would essentially, sooner or later, phase out fossil fuels. That would roll back much of the progress America and the world has witnessed since the 19th century in economic and human well-being while increasing pressures on the rest of nature.

An alternative, embraced by many conservatives, is the “all-the-above” (ATA) policy. This approach preserves the option of using fossil fuels but with strict limitations that, however, are not founded on empirical science. Moreover, ATA would hamstring economic growth, increase the cost of living, and particularly hurt those on the lower economic rungs. We all would be poorer. 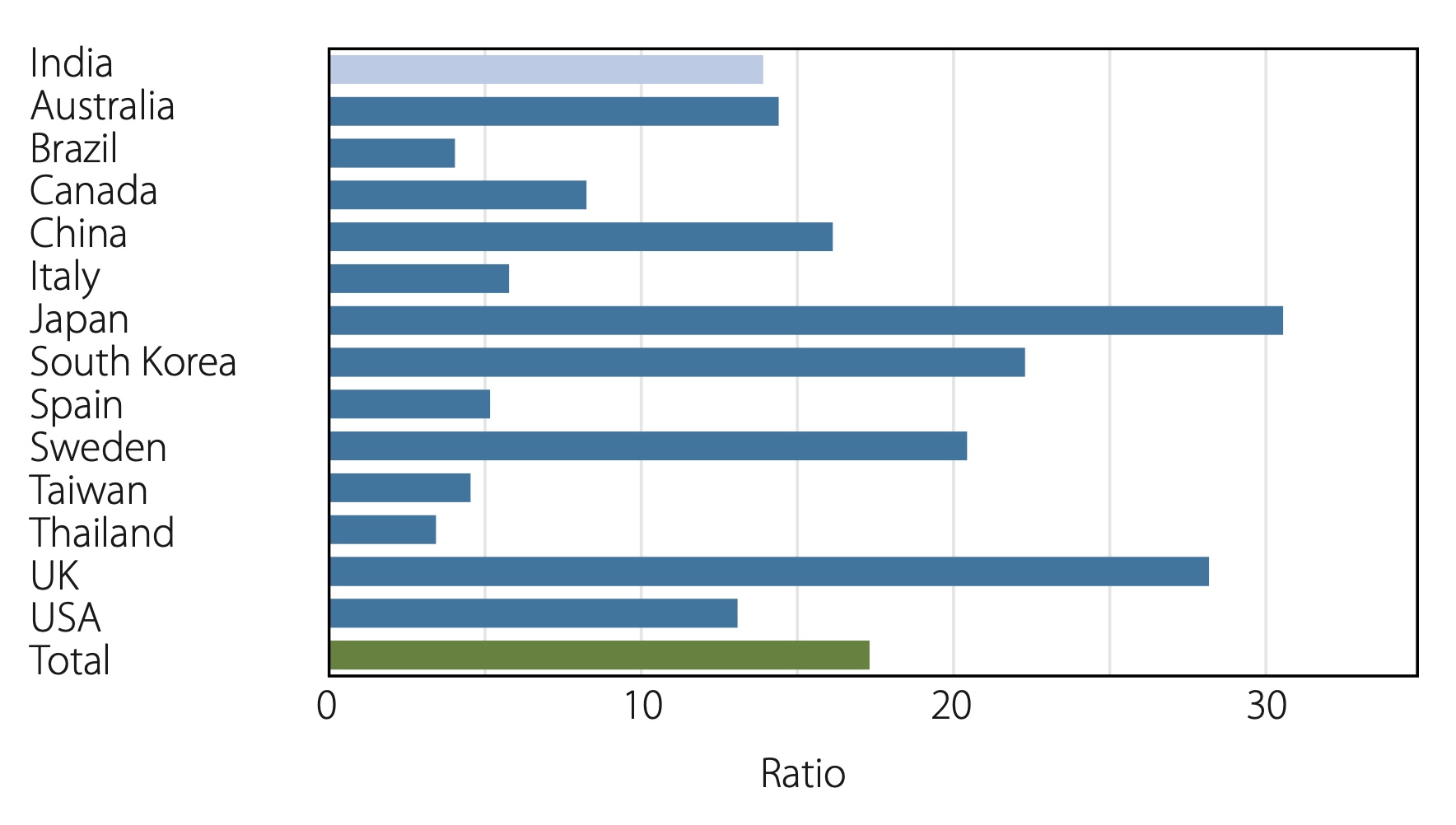 Figure 10 from “Impacts of Climate Change: Perception and Reality, Report 46, The Global Warming Policy Foundation.” Ratio of deaths attributable to colder- than-optimum versus those attributable to warmer-than-optimum temperatures. Source: Gasparrini et al. (2015), except India, from Fu et al. (2018). The total bar is based on the aggregate deaths for countries in dark blue.

New power plants using fossil fuels would have to employ technologies to capture CO2 emissions, perhaps convert them, if necessary, to other forms, and store them in stable geological formations or use them in commercial products.  To date, however, there have been no successful demonstrations that such technologies, while technically feasible, are economically viable at the scale needed to significantly reduce CO2 emissions.

Neither has it been established that reducing atmospheric CO2 would be desirable when the gas contributes significantly to crop production in a still-growing but hungry world and to preserving habitat and ecosystem health. Equally important, imposing limits on fossil fuels that go beyond today’s best practices is not underpinned by science.

The fundamental problem with the ATA approach is that it accepts claims that CO2 is an existential problem when there is no empirical corroboration of warmists’ apocalyptic narrative.[1] Instead, the following global trends are widely recognized:

Importantly, since the Industrial Revolution, virtually every measurable, significant indicator of human well-being has advanced because of the economic growth and technological change that was brought about through the consumption of fossil fuels and the economic surpluses that they generated.[2] Use of fossil fuels freed resources, including most significantly the time and brain power that human beings had to devote previously to agriculture and other tasks where brawn rather than brains were at a premium. Consequently, globally:

As for environmental health, fossil fuel-related technologies – including machinery, fertilizers and pesticides – have helped increase global food production at least 62.5 percent directly or indirectly and have enabled human beings to spare 20.4 percent of global land area (GLA) for the rest of nature. This exceeds both the habitat lost currently to cropland (12.2 percent of GLA) and the global cumulative area currently reserved or identified as conservation areas (estimated at 14.6 percent of GLA).[3] For context, the area saved from conversion to agriculture is 25 percent larger than North America.

Thus, the notion that, notwithstanding the remarkable reductions in traditional air pollutants from fossil fuels, they need to be controlled further or phased out because of CO2 emissions is contra science and contra human and environmental well-being. More importantly, moving away from coal, oil and natural gas would negate much of the progress humanity has achieved since the 18th century and would sacrifice a substantial share of the earth to agricultural pursuits.

To summarize, all-the-above policy, while sounding beguilingly attractive, is an unhelpful concession to those hostile to fossil fuels – a compromise that would undermine two-and-a-half centuries of humanity’s advances in caring for itself and the Earth.

This commentary was first published at Human Events, December 8, 2022.

Dr. Indur Goklany is the author of several books including “The Improving State of the World: Why We’re Living Longer, Healthier, More Comfortable Lives on a Cleaner Planet,” and is a member of the CO2 Coalition, Arlington, Virginia. He holds degrees in electrical engineering from Michigan State University (Ph.D.) and the Indian Institute of Technology, Bombay (B.Tech.).