[Editor’s Note: The American oil and gas industry has joined hands to write Joe Biden and tell him to choose American energy development before begging the Saudis for their oil.]

Twenty-seven natural gas and oil trade organizations from across the country addressed President Biden in a letter released on June 23, 2022. As the President plans to travel to Saudi Arabia next month, industry trade groups urged him to look closer at American-made energy before seeking foreign solutions. 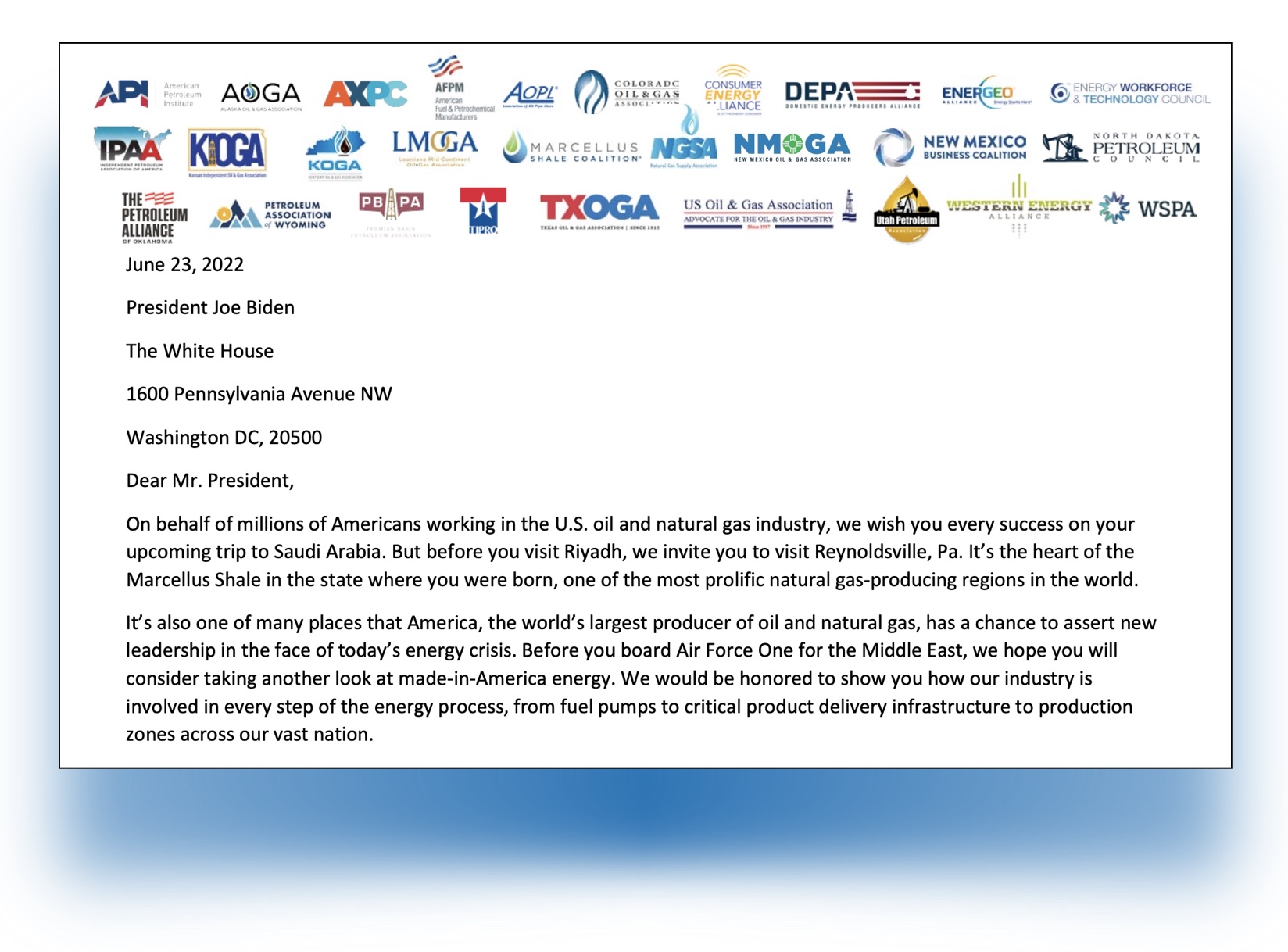 “Coterra welcomes the opportunity to host the #BidenAdministration to Susquehanna County, PA. This is the home of the #MarcellusShale and is the largest #NaturalGas producing county on the East Coast,” said George Stark, Director of External Affairs.

The letter is a plea from the trade organizations and the millions of energy workers across the country. It’s an open invitation to the President and his cabinet to explore how energy is produced and delivered from start to finish. From production to infrastructure to refineries, our industry is proud of the process and would welcome the opportunity to showcase all aspects of it.

Our nation contains some of the most prolific natural gas-producing assets in the world… And they’re located in the Marcellus Shale. The same region of Northeast Pennsylvania where the President was born. That’s not to overlook the magnitude of energy coming out of the Gulf of Mexico and Alaska or the Permian and Bakken basins.

Here is the full text of the letter:

On behalf of millions of Americans working in the U.S. oil and natural gas industry, we wish you every success on your upcoming trip to Saudi Arabia. But before you visit Riyadh, we invite you to visit Reynoldsville, Pa. It’s the heart of the Marcellus Shale in the state where you were born, one of the most prolific natural gas-producing regions in the world.

It’s also one of many places that America, the world’s largest producer of oil and natural gas, has a chance to assert new leadership in the face of today’s energy crisis. Before you board Air Force One for the Middle East, we hope you will consider taking another look at made-in-America energy. We would be honored to show you how our industry is involved in every step of the energy process, from fuel pumps to critical product delivery infrastructure to production zones across our vast nation.

First, come tour one of America’s refineries – currently operating at 94% of capacity, among the highest in the world – where the fuels are made to keep America’s 275 million registered vehicles running. America’s 125 refineries are producing more diesel (and renewable diesel), jet fuel, gasoline, and other refined product than at any point on average over the past five years.

Next, come visit Colonial Pipeline’s state-of-the-art command center, which controls the 5,500-mile critical infrastructure that safely carries millions of gallons of fuel products from Gulf Coast refineries through the South and up the East Coast every day.

Finally, join us in one of America’s major energy-producing areas – along the shores of the Gulf of Mexico; in Alaska, the Marcellus, the Permian or the Bakken basins; or even Kern County, Calif. – which together launched the American energy revolution that ended decades of U.S. energy scarcity and growing dependence on foreign governments. In the process, American energy has created millions of good-paying U.S. jobs, worked to shrink our environmental footprint, boosted economic growth, funded conservation in nearly every U.S. county, and transformed entire states – as the Marcellus did, turning Pennsylvania into a powerhouse of natural gas.

U.S. energy reserves – produced to among the highest environmental standards in the world – are the answer in the global quest for reliable energy supplies. American energy bolsters U.S. competitiveness and national security and brings economic opportunity to every corner of America.

America’s oil and natural gas industry stands ready to advance the shared goals of meeting the world’s growing need for energy while also ushering in a lower-carbon future – including making annual investments that rival the federal government in carbon capture, utilization and storage; hydrogen; and other innovations. Your trip to Saudi Arabia next month is important on a number of those fronts, including boosting global energy supply. Yet American-made energy solutions are beneath our feet, and we urge you to reconsider the immense potential of U.S. oil and natural gas resources – that are the envy of the world – to benefit American families, the U.S. economy and our national security.

With these abundant, affordable, and reliable resources, American-made energy can and should be considered a viable solution.