American LNG Is Changing Everything Energy in Europe

American LNG is disrupting the Europe energy market, confronting Russian gas with competition, lowering prices there and bolstering economies here in the US.

Natural gas, via American LNG exports, is saving Europe money, boosting its energy security and sustaining rural economies in places such as Pennsylvania, Ohio, West Virginia and Texas. The amount of American LNG going to Europe has increased in astounding fashion; much faster than many anticipated.

OilPrice.com carried a story yesterday that should make a lot of Europeans and rural Americans very happy; American LNG is flooding into their energy market. Here are some key excerpts from the story (emphasis added):

Although northwest Europe has traditionally been the place of LNG imports, this summer Spain is importing high volumes of the super-chilled fuel, as electricity demand in an above-normal temperature summer grows while water for hydropower capacity runs dry, according to Bloomberg estimates.

Spain, which accounts for nearly a third of Europe’s gas storage capacity, has imported more LNG cargoes this year, thanks to the low spot prices.

Spain’s gas market could be indicative of the European market which has been upended in the past two years with spot LNG volumes not linked to oil prices—a change from oil-based pricing of long-term gas pipeline supplies.

U.S. exports of LNG to Europe have surged by 272 percent since July 2018, when the United States and the European Union (EU) pledged to boost their strategic energy cooperation, the European Commission said in May.

At the end of last month, the EC said that the since July 2018, the EU has significantly boosted its LNG imports from the U.S.—by more than 367 percent in one year. So far this year, one third of all U.S. LNG exports have gone to the EU. The U.S. is the EU’s third largest supplier of LNG, while the EU has emerged as the primary destination of U.S. LNG exports, according to the European Commission…

Due to Europe’s soaring LNG imports, the two largest pipeline gas suppliers to the continent—Russia’s Gazprom and Norway’s Equinor—have lost market share for the first time in at least four years, Reuters reported earlier this week, quoting data and calculations from Refinitiv.

LNG’s share of natural gas imported into western and central Europe between October 2018 and August 2019 rose to 14 percent from 5 percent for October 2017-August 2018. Norway’s share fell to 33 percent from 38 percent amid heavy maintenance and production and exports reduction from Equinor, while Gazprom’s share dropped to 32 percent from 33 percent, although the Russian gas giant boosted sales amid growing demand to fight for its market share, Refinitiv data showed.

Going forward, the share of LNG in Europe’s gas deliveries will depend on the global LNG demand and supply picture and spot prices, but there’s no doubt that LNG continues to upend the natural gas market in Europe.

Well, how about that? Here is the data on American LNG exports from the Energy Information Administration, sorted by export terminal and country: 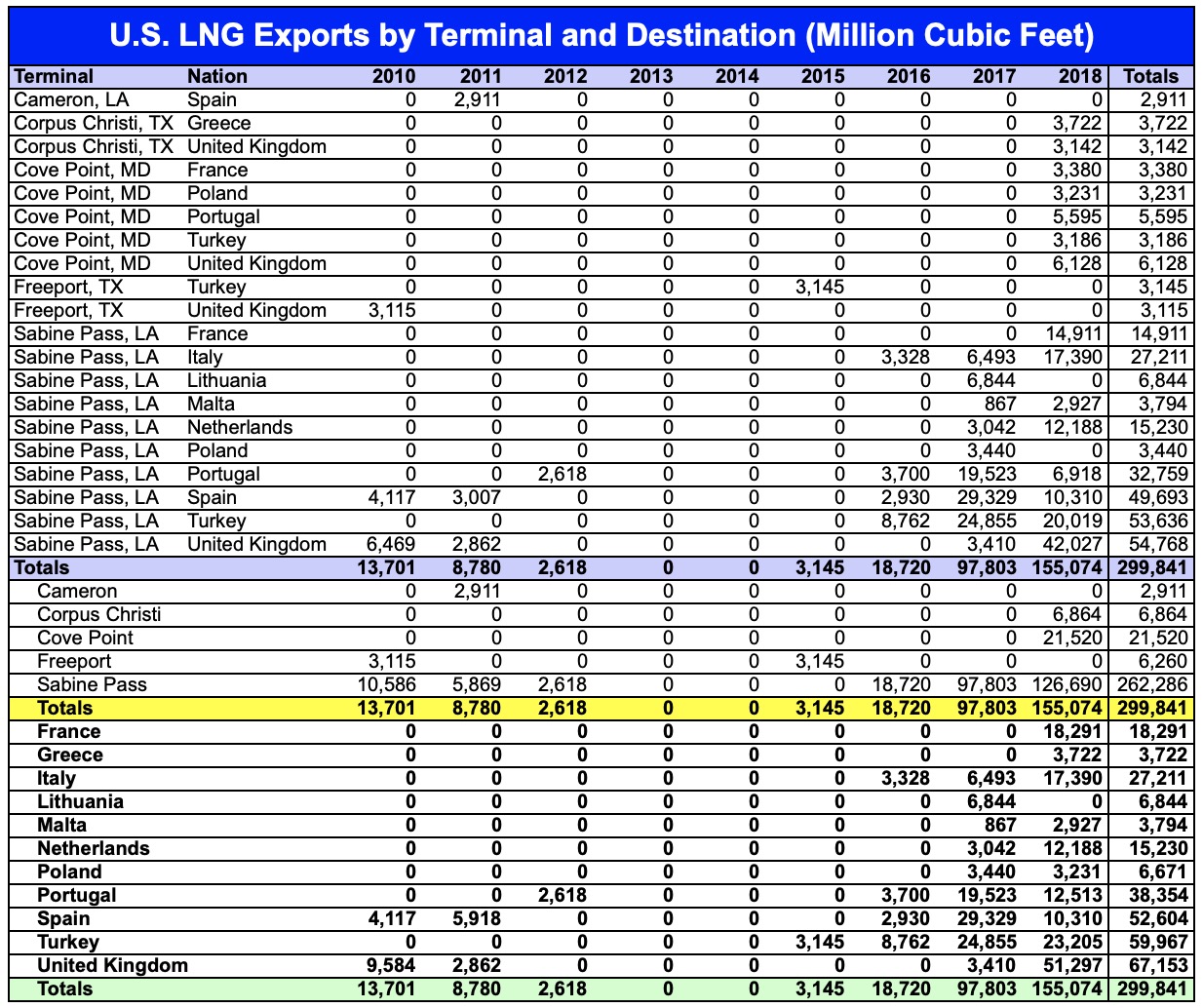 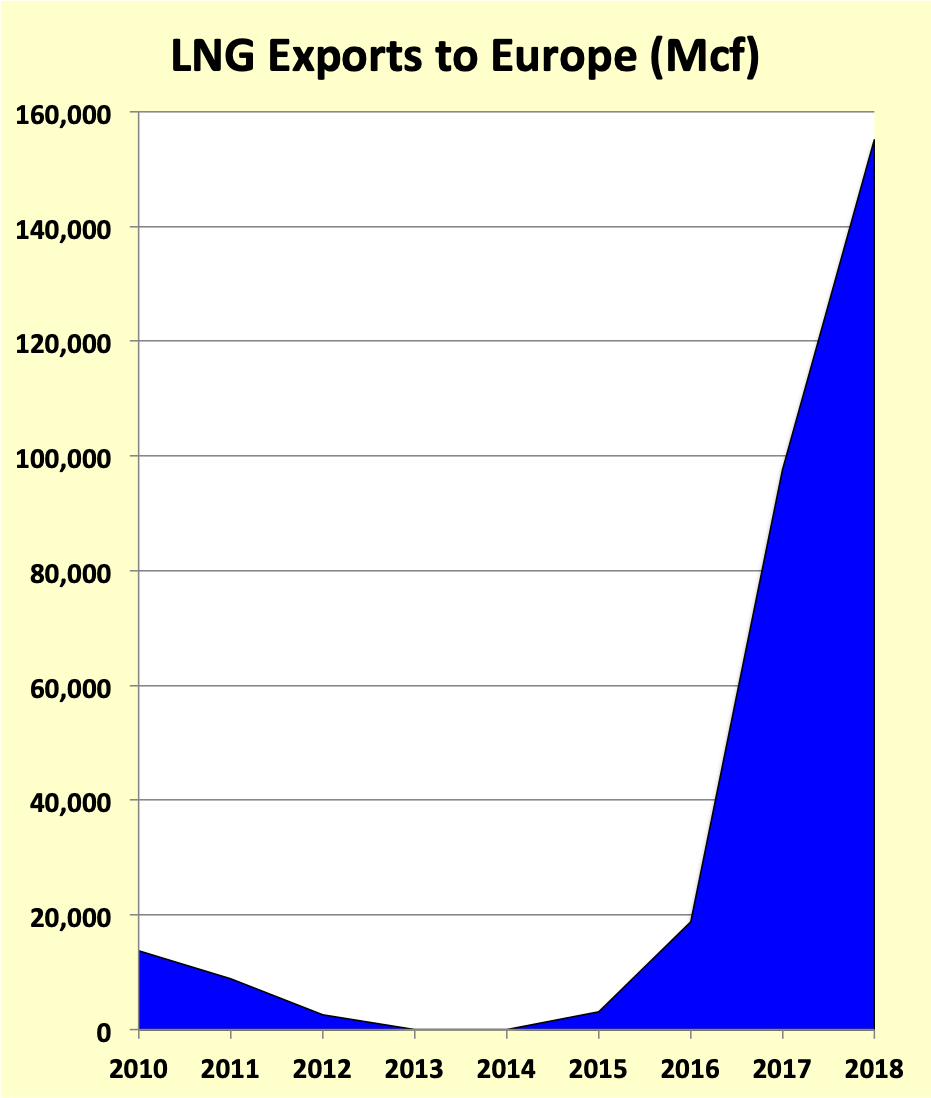 It’s also important to note Appalachian gas isn’t just going to Europe out of Cove Point. As our buddy Jim Willis notes, it is also feeding Sabine Pass and will be shown to be supplying the Cameron terminal as well when 2019 figures are released. Appalachian shale gas is going to Europe through multiple terminals. Moreover, the growth is astounding, with both Europe and rural America being the beneficiaries. Russia? Not so much.