[Editor’s Note: The American Meteorological Society has gone to the dark, rainy side where politics always trumps science and advocacy has forever replaced professionalism.]

Just when I think that the climate-related madness cannot get any shoddier something comes up even worse.  The American Meteorological Society (AMS) Council adopted a special statement on 8 July 2022 in response to the Supreme Court decision West Virginia vs. EPA that takes the level of climate change hysteria to a whole new level.

New York’s Climate Leadership and Community Protection Act (Climate Act) plans to reach net-zero by 2050 that are outlined in the Draft Scoping Plan fully align with the material in this Statement.  I submitted commentson the Plan and have written extensively on implementation of New York’s response to that risk because I don’t agree that the alleged problem can be solved simply and affordably. The opinions expressed in this post do not reflect the position of any of my previous employers or any other company I have been associated with, these comments are mine alone. 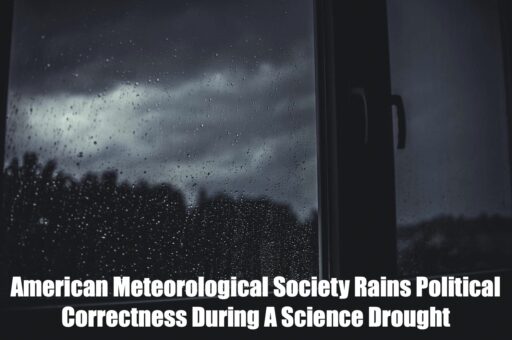 The AMS is deeply concerned by the United States’ inadequate response to climate change and the dangers it poses to the nation and all life. This inadequacy is illustrated most recently–but by no means only–through the Supreme Court decision West Virginia v. EPA.

Climate change is a highly solvable problem and the available solutions offer tremendous opportunity for societal advancement and climate protection. We applaud the many people throughout the country who are working constructively to tackle climate change, including many government officials, politicians, members of the public, scientists, and members of the business community.

All people should know that:

1. Climate change is extraordinarily dangerous to humanity and all life

> Climate is a basic life-support system for people and all life.

> Global climate changes occurring now are larger and faster than any humanity is known to have endured since our societal transition to agriculture.

> The physical characteristics of the planet, biological systems and the resources they provide, and social institutions we have created all depend heavily on climate, are central to human well-being, and are sensitive to climate change.

> The warming effect of our greenhouse gas emissions is demonstrated through laboratory experiments, evidence from past changes in climate on Earth, and the role of greenhouse gasses on other planets.

> The patterns of climate change occurring now match the characteristics we expect from our greenhouse gasses and not the other potential drivers of change: the sun, volcanoes, aerosols, changes in land-use, or natural variability.

3. The scientific conclusions summarized here result from decades of intensive research and examination

> The scientific evidence has been assessed comprehensively by independent scientific institutions and independent experts that consider all evidence.

> Accuracy is central to credibility for scientific institutions such as the U.S. National Academy of Sciences, the American Meteorological Society, and American Association for the Advancement of Science, all of which have assessed climate science.

4. Solutions are available and highly promising–a serious reason for optimism.

> Greenhouse gas emissions are an economically harmful market failure. Those who emit pollution to the atmosphere shift the costs of climate damage onto everyone, including future generations. Making emitters pay for all the costs of their use of our atmosphere would help correct this failure and thereby improve economic well-being.

> Building our resilience to climate impacts (adaptation) makes communities stronger and better able to deal with both existing vulnerabilities and emerging threats.

People are changing climate and it poses serious risks to humanity. There are a wide range of response options that are well understood, many of which would be broadly beneficial. We will need to work together to harness human ingenuity to address climate change. Therein lies an even greater opportunity for humanity. If we can address our climate problem, we will have a new template for the wide range of challenges and opportunities facing us at this point in the 21st century.

Tony Heller writing at Real Climate Science eviscerated the “Climate change is extraordinarily dangerous to humanity and all life” statement.  He showed natural disasters are decreasing and life expectancy has doubled since fossil fuel use has become widespread across the globe.  Willis Elsenbach’s post Where is the Climate Emergency is a more comprehensive rebuttal to this statement.  My comments on similar claims in the Draft Scoping Plan also argued that if you actually look at the data that these threats are unsupportable.

I stopped being a member of the AMS in 2012 when the organization ranked advocacy above science. I tried to argue their approach was wrong but the responses back showed that they were not interested in toning down their advocacy.  The arguments supporting the “people are changing climate” statement appear to be talking points for the public.

Near the end of the Trump Administration a series of short, easily understandable brochures that support the general view there is no climate crisis or climate emergency, and pointing out the widespread misinformation being promoted by alarmists through the media were prepared.  The following brochures address this other side of these arguments:

The section “The scientific conclusions summarized here result from decades of intensive research and examination” is a direct appeal to authority.  The recent Global Warming Golden Goose article summarizes the follow the money trail that suggests that the scientific institutions we are supposed to trust are not necessarily interested in only scientific truth and enlightenment.  It amuses me that the first ones to scream that deniers are on the payroll of big oil are most likely to be directly benefiting from big green funding organizations.

The next section “Solutions are available and highly promising” shows an amazing lack of self-awareness.  The point of the previous section was that you should trust only the “experts.” Why in the world would anyone expect that the American Meteorological Society has expertise in energy solutions?  The vague, content-free arguments are a joke to anyone who has spent any time looking at the tremendous technological difficulties associated with running today’s society using intermittent and diffuse wind and solar or even follows today’s energy issues.

Any proposed transition plan that does not list nuclear power at the top of the list is not credible because that is the only source of dispatchable emissions-free electricity that can be scaled up.

I also have to wonder whether the authors follow current energy news. My feed of followed websites this weekend had articles on copper shortages that will preclude the net zero by 2050 transition, the amount of solar panels needed for the transition, the German net-zero transition is running out of energy, and the current Texas heat wave is straining power supplies so much that electric car owners are being asked to charge off-peak. My Draft Scoping Plan comments focused on the many instances where New York’s plan to transition to net-zero is anything but easy.  All of these issues invalidate the claim that the climate threat is “easily solvable”.

Once upon a time I was proud to be a member of the American Meteorological Society.  This policy statement is so embarrassing I don’t want to admit I was associated with a scientific organization that could publish something this far detached from reality.   Unfortunately, it will undoubtedly be used by advocates to “prove” that something can be done.  In my opinion I have no doubts that the suggested solutions will cause more harm than good.

A different version of this article was posted at Watts Up With That.