There have recently been renewed calls to re-impose a ban on crude oil exports in order to bring down domestic gasoline prices. But this would have the opposite effect as U.S. exports of crude oil save Americans money at the pump, reduce U.S. dependence on foreign oil, and create thousands of jobs at home, according to a new report from the American Petroleum Institute (API) and the American Exploration and Production Council (AXPC).

According to the report, since the crude oil export ban was lifted in 2015, “higher U.S. oil production expanded global oil supply, reducing global crude oil and refined product (including gasoline) prices” by $92 billion and increasing U.S. employment by 48,000 jobs. At a time when gas prices are so high it is essential that the United States focus on reducing prices. As AXPC CEO Anne Bradbury said:

“It’s clear that increasing the global supply of crude oil is critical to lower energy prices here at home and greater energy security around the globe.”

The report’s findings are in line with warnings the Federal Reserve Bank of Dallas gave at the start of the year:

“Because a cessation of U.S. crude oil exports would lower the supply of oil in global markets and raise its price, one would expect global fuel prices, if anything, to increase as a result. Refiners can always sell these fuels abroad at their global price, so it makes no sense for them to sell for less in the domestic market.”

“In other words, the prices of gasoline and diesel fuel in the U.S. would not be expected to decline and might actually increase, rendering the crude oil export ban not only ineffective, but also counterproductive.” (emphasis added)

With data collected by ICF, the API and AXPC report found that lifting the crude oil export ban increased U.S. GDP by $161 billion, improved the U.S. trade balance by $178 billion, and increased U.S. crude oil production by 1.8 barrels. This is because foreign exports allow the United States to increase production thereby upping global oil supply and reducing prices at the pump.

Another prime example of the benefits to the American people is the creation of jobs. Employment has increased in the upstream oil and natural gas support sector which includes engineers, maintenance, construction, derrick operators, rotary drill operators, roustabouts, and service unit operators among others. Upstream employment in turn creates jobs in related sectors like frac sand suppliers and trucking. Additionally, it induces jobs in unrelated sectors as employees are able to spend their new income on domestic goods and services. 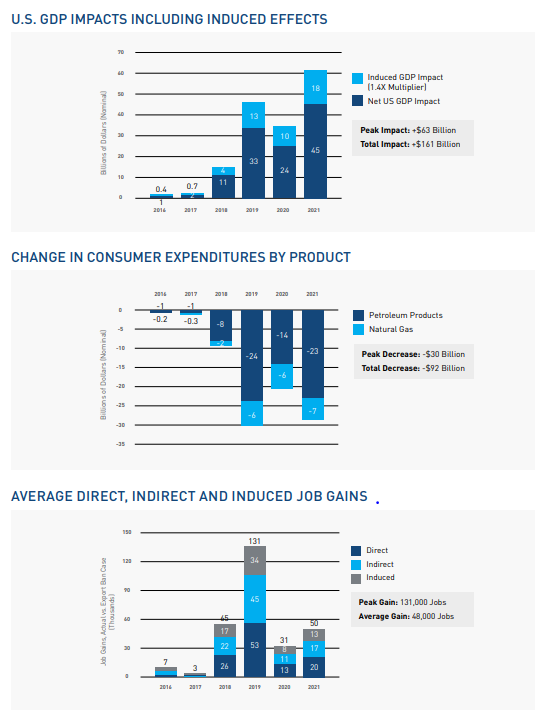 At a time when it is essential to have global energy security and support our allies, this report highlights the continued need to support increased oil and natural gas production and exports. A recent report by Accenture found that as the Russia-Ukraine Conflict continues the price of oil could reach $150 per barrel oil by the end of 2022. Limiting U.S. production could make that even worse.

As U.S. oil and gas trade associations, including the Independent Petroleum Association of America, said in a recent letter to President Biden:

“The world is in the midst of an energy crisis, and energy demand is predicted to continue to grow. Gasoline prices in the US recently reached an all-time high, and many countries around the world are facing acute energy shortages. We must work together to provide affordable, ever-cleaner energy to the world. So-called climate policies, such as banning exports or restricting domestic production, moves us backwards and will drive up both costs and global emissions…”