Appalachia First: A Bold, Positive Vision for the Region!

Appalachia First: A Bold, Positive Vision for the Region!

Nick DeIuliis at CNX Resources launches Appalachia First and explains how natural gas is a catalyst, not a bridge, fuel for bringing new life to an old region.

Appalachia First is a bold new initiative being launched by Nick DeIuliis, the President and CEO of CNX Resources. It is focused on the tremendous opportunity that now exists to revive the Appalachian region and make us the beating heart of a global economy. The key to all this is, unsurprisingly, is to be found under our feet in the form of the natural gas  sequestered in rock that we learned to release with the shale revolution. And, the term “Appalachia First” is about using this resource to first build up our own region before merely shipping it all to China. It’s a wonderful vision and Deiuliis articulates with a whole raft of compelling arguments.

The Appalachia First vision was announced by CNX Resources earlier this month. It

CNX President and CEO Nick DeIuliis said, “The nation and world are waking up to stark energy realities: energy scarcity, deterioration of our power grid, and energy inflation stoking wider inflation. Policy often relies too heavily on applications such as wind, solar, and electric vehicles that can present large life cycle carbon footprints, require supply chains stretching thousands of miles, are costly, and face serious challenges when scaling in regions like Appalachia. If we don’t get energy and climate policies right, our economic competitiveness will be stifled, the environment will be worse off, and we will end up enabling our adversaries to wage war and forcing leaders to negotiate energy supplies from dictators and despots.”

Mr. DeIuliis continued, “There is a better, simpler, and more logical way. Appalachia can be the launchpad to a more efficient and sustainable future catalyzed by lower carbon intensity natural gas. This proud region and its people should be the solution to deliver reliable and affordable energy – our region’s abundant energy resources can and must be used more effectively to prioritize the improvement of the human condition, the environment, the nation, and the world. In other words, put our local communities first and watch what happens. We believe the strategic approaches integrated throughout this vision represent a clear roadmap to transform key sectors of our economy and workforce while also changing the world for the better.”

The full Appalachia First plan is available here and is nicely explained by Nick DeIuliis himself in this presentation:

Note the slogan “Produce It Here, Use It Here – First” as it concisely summarizes the vision of a new Appalachia, one modeled not on the “Waltons,” the FoxFire Story or other cultural elegy but, rather, on the huge potential that exists to improve lives by using our natural gas here at home first to rebuild and create new.

The plan and the slide show/video emphasize several critical facts that make this a vision that cannot be ignored. Consider these facts; 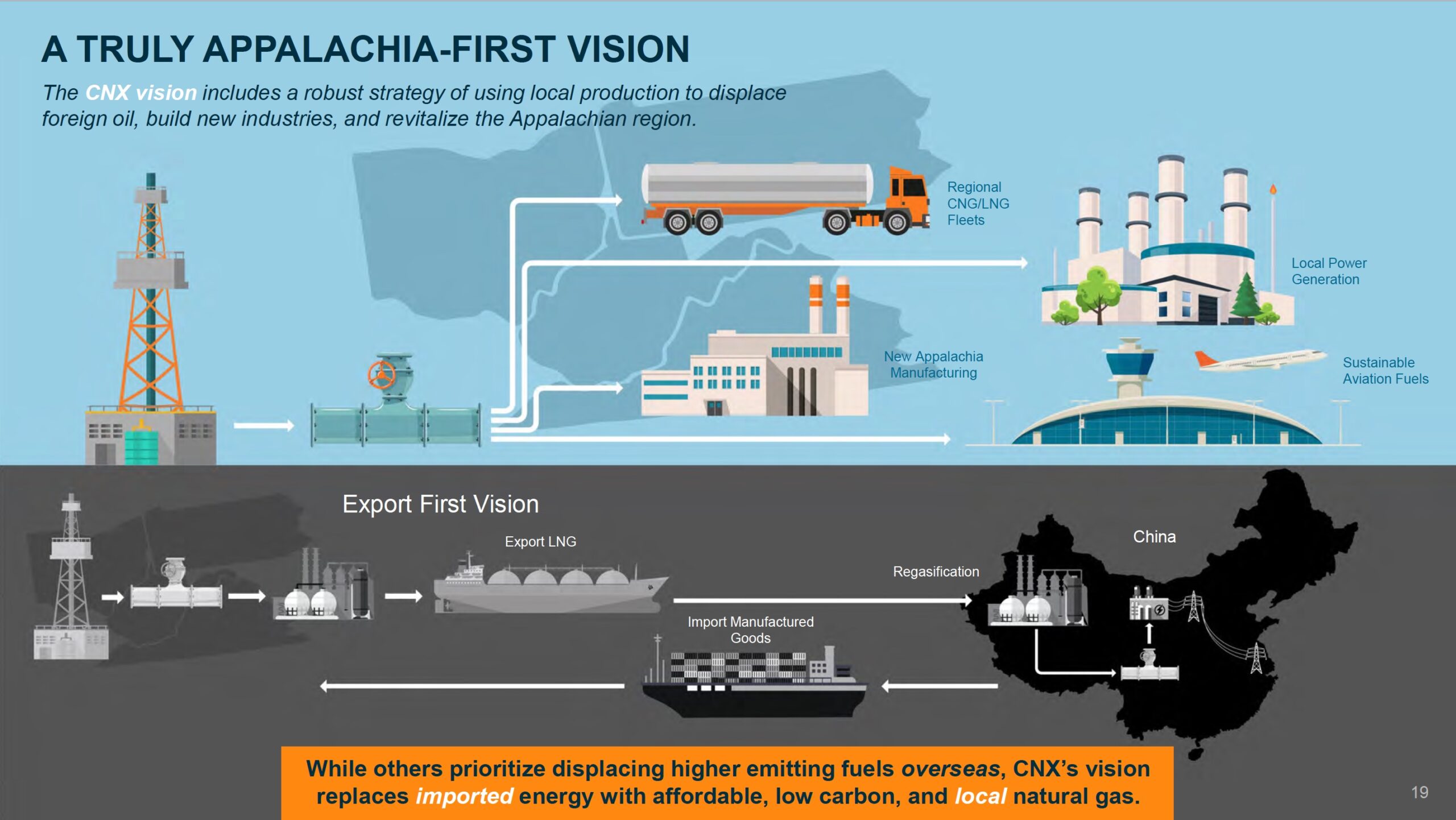 Nick is not, of course, suggesting there shouldn’t be exports of our natural gas but, rather, that we should put Appalachia First, using our natural resources to build up the region, employ ourselves, manufacture our own goods and avoid foreign energy dependence. Who can argue with that? We’ll be exploring this further in future posts.