[Editor’s Note: Arctic ice has expanded dramatically although you’d never know it from the barrage of politically correct stories intended to hype a corporatist climate scam.]

With ice coverage for July and August remaining above the 10-year average of 2010-20, the extent of summer sea ice in the Arctic has surprised experts who once predicted that such levels would be impossible.

This stands in stark contrast to the dominant climate narrative that predicts the dwindling of summer ice in the Arctic. Some politicians had even claimed that parts of the Arctic would be ice-free by now. 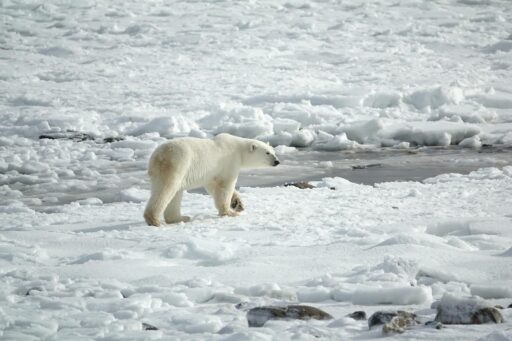 With the seasonal Arctic melt technically over, it is fair to conclude that the extent of ice in the summer of 2022 has been greater than the 10-year average. On most days in July and August, sea-ice levels were above the 10-year average and significantly more than the previous few years.

The Japanese National Institute of Polar Research provides a useful visualization in the graph below. This year’s Arctic sea ice — shown in red — is compared with the 10-year average and the levels of the previous few years, including that of 2012 when ice had reached its lowest of the period tracked. 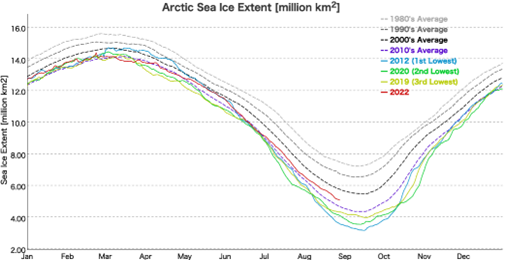 Data of sea-ice extent in square kilometers in the Arctic Ocean from June 2002 to the present and decadal averages of 1980s, 1990s, 2000s, and 2010s are included.  Source: National Institute of Polar Research, https://ads.nipr.ac.jp/vishop/#/extent

According to the Danish Meteorological Institute, the extent of Arctic sea ice was much greater than the last five years as shown in the nearby graph. 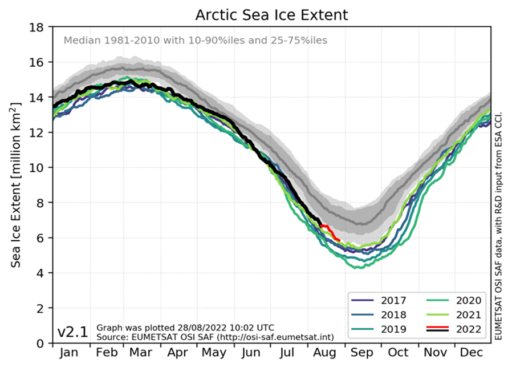 Summer temperatures in the Arctic remained at levels similar to the 44-year average of 1958-2002, with no marked increase in warming. In the graph, temperature is shown in the Kelvin scale; the horizontal blue line is freezing, or zero degrees Celsius and 32 degrees Fahrenheit. 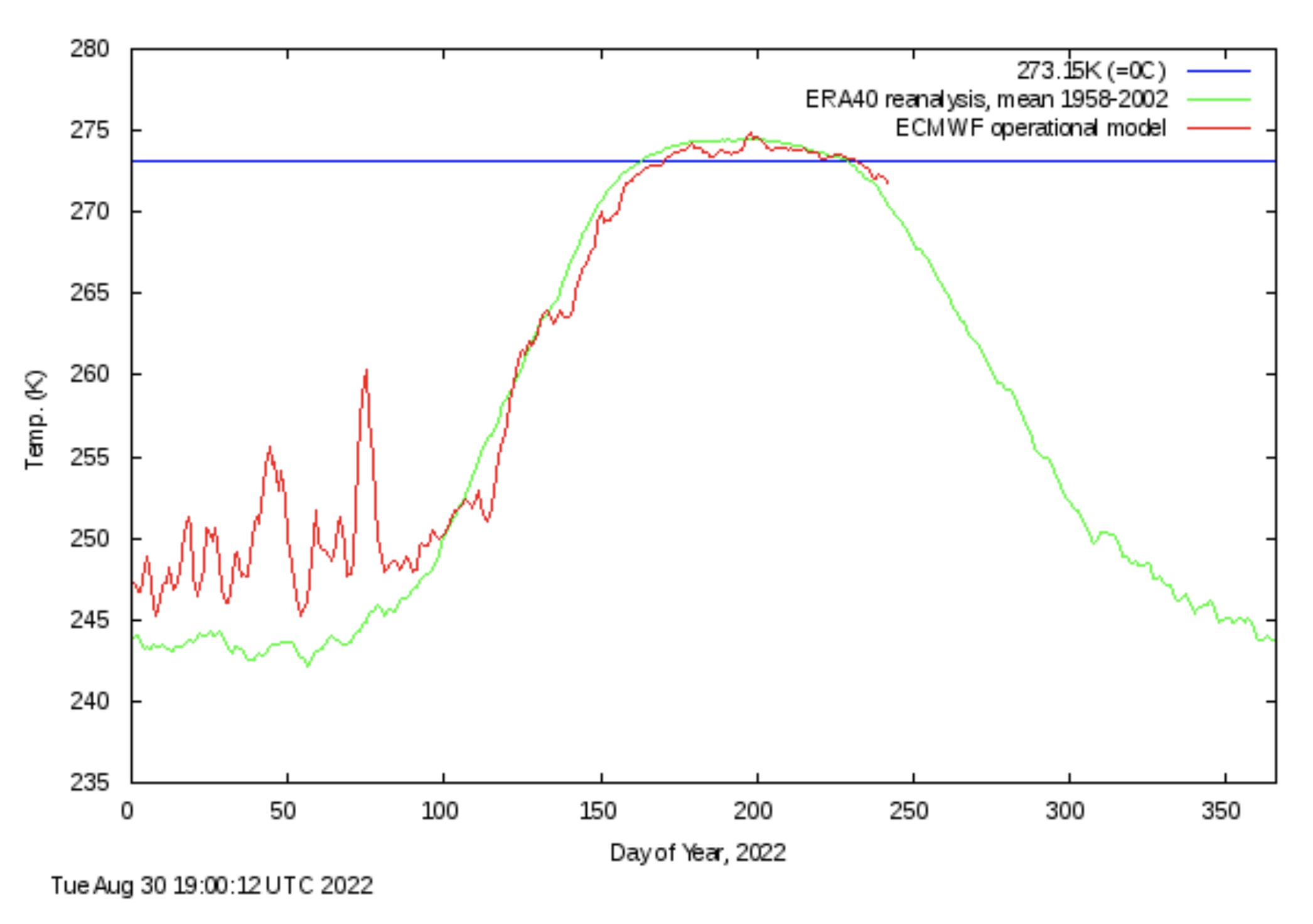 Daily mean temperature and climate north of the 80th northern parallel as a function of the day of year. Source: Danish Meteorological Institute, http://ocean.dmi.dk/arctic/meant80n.uk.php

Now, here’s the big question: Why were internationally acclaimed climate scientists unable to predict this marked increase in the extent of summer sea ice? Is it because their overall approach is biased toward supporting the theory that carbon dioxide is warming the planet to dangerous levels? Or is it because their models are incapable of predicting future temperatures?

The answers must come from the doomsayers themselves. They need to explain why Arctic summer temperatures have been no different from the 44-year average and why summer sea ice is above decadal averages.

Acknowledging that we are yet to understand the complex climate system will undermine the credibility of scientists and political institutions advancing destructive energy policies to address a fantasy of climate catastrophe.

Melting of Arctic ice has been used as a major data point in the justification of restrictive energy policies adopted by many countries. It is ironic — and infuriating — that millions across the world are suffering from high energy prices and blackouts at the same time that Arctic sea ice has been at its greatest extent in five years!

Europe is facing rapidly rising electricity prices and a natural gas shortage. Citizens in the U.S. are experiencing high energy prices as their access to cheap fossil fuels is restricted by government’s infatuation with solar and wind power. China is scampering to reduce blackouts. All this could have been avoided if political leaders had not promoted a false climate emergency.

It makes no sense to force people to live in darkness in the name of climate policy when the policy makers themselves have so little understanding of the planet’s mechanisms of warming and cooling. Acknowledge the infancy of climate science and liberate people from energy tyranny.

Authored by Vijay Jayaraj  and originally published at American Thinker on August30, 2022 here. Vijay Jayaraj is a Research Associate at the CO2 Coalition, Arlington, VA, and holds a master’s degree in environmental sciences from the University of East Anglia, UK. He resides in Bengaluru, India.