Are Big Electric Utilities But A Circle of Corruption Today?

There is something rotten at the Edison Electric Institute and among big electric utilities who control their own electricity markets; a circle of corruption!

Competition is the most highly feared enemy of corruption. It threatens to undermine every scheme. It eliminates the golden opportunities offered by monopolized markets and the eviscerates the potential profits to be had from corporatist raids on government treasuries and ratepayers’ collective wallets. Competition is to avoided at all costs and if corruption has to be stepped up to preserve corruption, so be it. There is no finer example of this line of thinking than the one being advanced by some big electric utilities today and their organization the Edison Electric Institute, which looks like a circle of corruption if their honorees among their leaders are any indication. 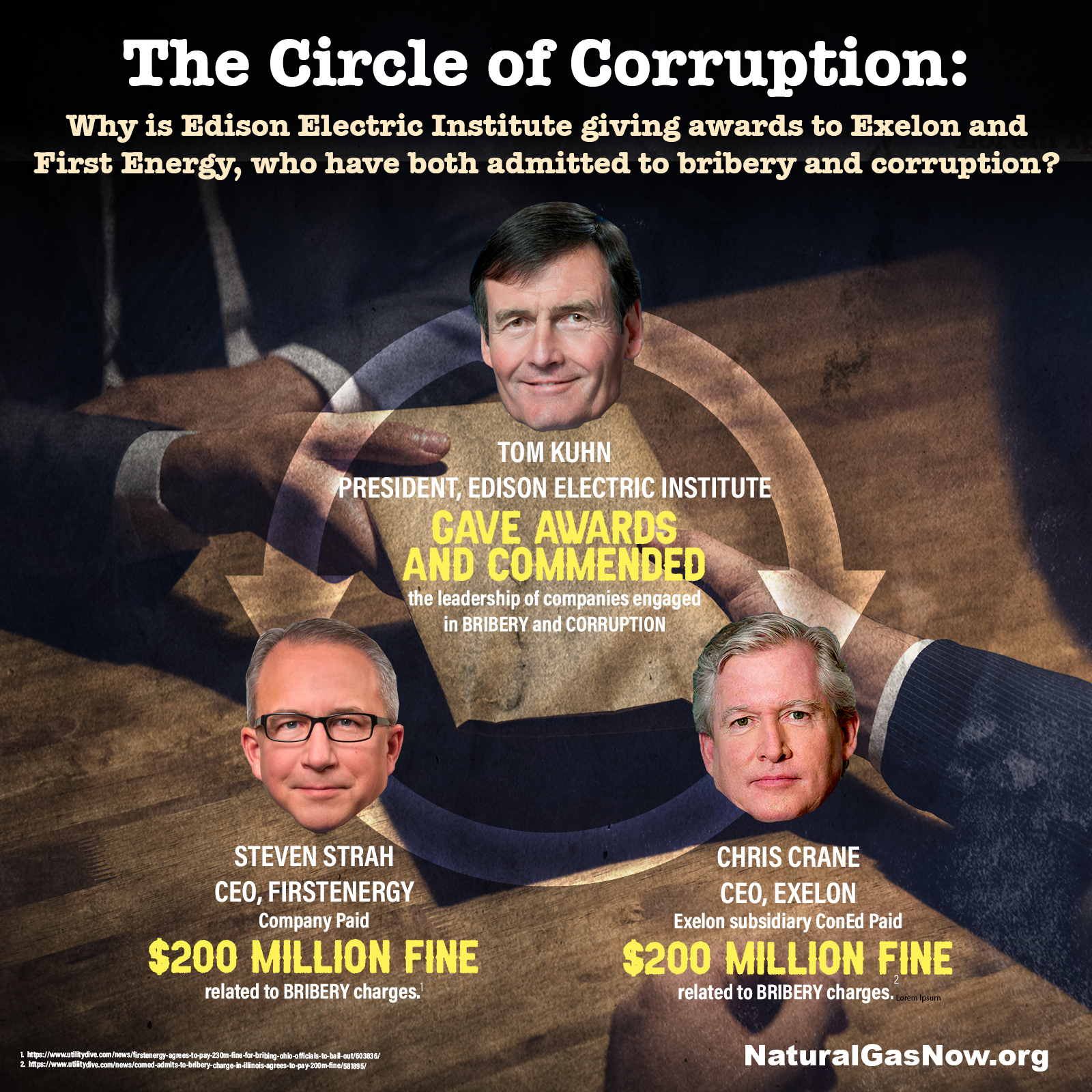 Yes, big electric utilities have been awarding themselves prizes for their corruption and I’m not exaggerating. Consider this video from 2020, first issued by FirstEnergy Corp., a perfect example of the vertically integrated, non-competitive, monopolist big electricity utility that is determined to pillage the government and ratepayers:

Now, I’m all for cooperation between labor and management extolled in this video, later taken down by FirstEnergy, but the big award celebrated in it was about something called Ohio House Bill (HB) 6, signed into law in July, 2019, which was designed as a FirstEnergy bailout for mismanagement of two nuclear power plants along Lake Erie. It would have cost taxpayers more than $1 billion in rewards for incompetence and it was pure corporatism. It was also pure corruption, as this excerpt from Utility Dive explains:

FirstEnergy Corporation announced on Thursday a settlement agreement to pay a $230 million penalty for bribing Ohio officials to  ensure the passage of a ratepayer-funded bailout for older generation assets, including two nuclear plants.

The utility cooperated with federal investigators to disclose paying millions through dark money groups to state officials, including former Ohio House Speaker Larry Householder and former Public Utilities Commission of Ohio (PUCO) Chairman Sam Randazzo. The company acknowledged using 501(c)(4) organizations, which are registered lobbying entities, to conceal the nature, source and control of payments in the pursuit of the nuclear legislation…

The settlement announced on Thursday did not charge any individuals, but in October, the company fired former CEO Chuck Jones and two vice presidents connected to a $4.3 million payout to Randazzo ahead of his appointment as PUCO chair.

The details in the 49-page settlement agreement, in which FirstEnergy had to admit that company executives paid money to public officials in return for official action, has led to stakeholders raising questions about utility dark-money and political spending.

Now, go back to the video and note how, at 0:50, Tom Kuhn, the President of FirstEnergy, speaks about Chuck Jones and First Energy in glowing terms. Quite the contrast, isn’t it? Steven Strah is the executive left in charge after the others were fired, so this isn’t about him but, rather, about the corporatist culture of big vertically integrated electric utilities and FirstEnergy Corp. isn’t the only one.

Tom Kuhn, in fact, just gave Exelon’s President and CEO, Chris Crane, the Edison Electric Institute‘s Distinguished Leadership Award. Exelon is an Illinois example of the corporatist big electric utilities that are part of an apparent circle of corruption, but here’s their own announcement a few weeks ago bragging about the award 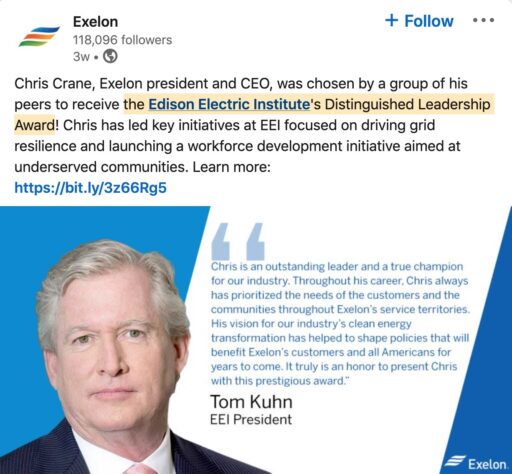 Once again, though, Utility Dive gives us some sharp contrast:

Exelon subsidiary ComEd agreed to enter a three-year deferred prosecution agreement and pay a $200 million fine based on a single bribery charge related to a long-running scheme in Illinois.

On Friday, the utility admitted in an agreement with federal prosecutors to arranging jobs, monetary payments and subcontracted work for “various associates of a high-level elected official in the state of Illinois” from 2011 to 2019. ComEd may not recover the fine through its rate base. The utility will have to pay through its shareholders.

The agreement relates only to ComEd, does not extend allegations of misconduct to Exelon and “resolves the government’s investigation” into both companies, according to a statement from ComEd. Advocacy group Public Citizen maintains that Exelon needs to face greater consequences for the bribery charge of its Midwest subsidiary…

The U.S. Attorney’s Office conducted a criminal investigation and received cooperation from ComEd, leading to a three-year deferred prosecution agreement based on the conduct of past and current employees…

The charges will be dropped if ComEd meets certain conditions and pays $200 million. If the company does not completely perform or fulfill its obligations to the U.S. in the next three years or violates the agreement, it could face an additional fee between $240 million and $480 million…

ComEd agreed to changes within the organization, including a new head of oversight for the company: a vice president of compliance and audit. The utility agreed to remediation activities, including new policies for interacting with public officials and prohibiting the use of third-party lobbyists.

So, one of Exelon’s subsidiaries gets a major fine in the hundreds of millions of dollars, just like FirstEnergy, and the Edison Electric Institute gives them a major award a little over a year later. The FirstEnergy award at least slightly preceded the exposure of the corruption but, in Exelon’s case, it’s almost as if it’s a wink and a nod, isn’t it?

I will be digging into all of this much further with another post, but this is all deeply rotten stuff. I’m not saying any of these individuals are personally corrupt but they are leading outfits that represent a culture of corruption, a circle of corruption if you will, where nefarious attempts to raid the public trough are not only pursued in a corrupt fashion, but are then rewarded by their industry association. Will the circle go unbroken? That’s the only real question. This much we know; it will only be broken by competition. These monopolistic big electric utilities are no longer tolerable and competition to and among them is the only thing that will power the people instead of the corrupt power-brokers.