Ned Lang, President of Upper Delaware River Basin Citizens, tells the President not to do bailouts for wasteful states such as New York that ban drilling!

I write this letter as president of the Upper Delaware River Basin Citizens (UDRBC) concerning the request by the Democrats and blue state governors for another round of bailouts.  We are a landowner group representing the interests and rights of landowners throughout the Upper Delaware River Basin, which includes portions of New York and Pennsylvania.  As you know, for decades these governors, who are begging for bailouts, have been anything but fiscally responsible with our hard earned tax dollars.

In fact, New York State has a projected six billion dollar shortfall in its 2020 budget.  Pennsylvania has a $1.5 billion shortfall in its budget for 2020-2021.  These two states have years of outrageous budget shortfalls, well before the Chinese virus, COVID-19, hit our country. They have buried their states in debt and are now attempting to seize the opportunity to have all of the financially responsible states and their taxpayers bail them out! We say to you, Mr. President, please tell them, “Not so fast! No bailouts!” 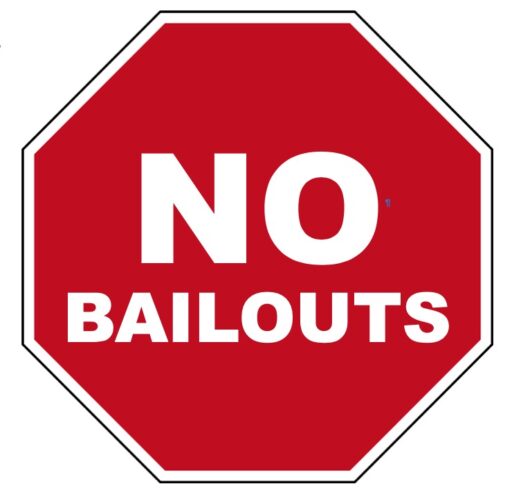 A couple of examples of the gross mismanagement by these two governors of their taxpayers’ money are included here.  According to data posted today on the Empire Center’s government transparency website, SeeThroughNY.net, over one in six New York State and New York City public authority employees were paid six figures in fiscal year 2019.  Additionally, the Washington Times reported that based on projections by the two retirement systems by the auditor general’s office, Pennsylvania’s two major public employees’ pension funds face $70 billion in debt while municipal pension funds face almost $9 billion in debt.

The decisions of the DRBC and New York State are not based on science as the EPA long ago found hydraulic fracturing was not tied to any significant pollution.  They are, rather, based on the short-term cynical politics of appeasing urban special interests, which have no concept of how their energy is made and delivered.  Neither state nor the DRBC should receive any federal rescue when they have inflicted their economic woes on themselves.

Data assembled in 2015 by the Institute for 21st Century Energy, under the auspices of the U.S. Chamber of Commerce, found Pennsylvania natural gas development via hydraulic fracturing and horizontal drilling added $4.5 billion to Commonwealth’s GDP that year.  New York State has viable Utica and Marcellus Shale resources that spread across the entire Southern Tier from Steuben County to Delaware and Sullivan Counties in New York State.

The seven counties most affected have resources roughly equivalent to the Northeast PA region that has accounted for about one-third of all Pennsylvania wells, meaning New York State has lost out on approximately $1.5 billion per year just from upstream oil and gas activity.  Indeed, one company in Susquehanna County has already invested $10 billion and paid out $2 billion to landowners in royalties and lease payments.

But, that’s not all.  The Commonwealth also benefited from $5.8 billion in lower residential energy prices and $2.7 billion in lower industrial energy prices that have occurred due to the development of pipeline infrastructure that Pennsylvania has permitted and New York has repeatedly denied.  Additionally, in New York State there are the additional millions that would have been paid in ad valorem taxes by gas drillers.

The DRBC region of Pennsylvania represents roughly 200,000 acres of land with developable natural gas resources, which is about 38% the size of Susquehanna County, PA.  Assuming, even if that area had 25% of the impact as in Susquehanna County, this would amount to roughly $162,500,000 of natural gas drilling economic activity for bordering Wayne County every single year with attendant increases in Marcellus Shale Impact Tax fees coming back to the county.  If Wayne County, PA, had been allowed to start drilling in 2007 with Susquehanna County, it reasonably could be expected to have seen $2.5 billion of investments by now along with some $500 million in royalties and lease payments, not to mention the increase in property and property tax revenue.

Put it all together and Pennsylvania and New York are missing out on a combined $2 billion of GDP per year and $12.5 billion of cumulative investment, along with consumer and industrial savings on energy prices (which are effectively the same as tax cuts) and $2.5 billion in payment to landowners.  It would be absolutely inexcusable to do bailouts of these states and agencies when they declined that much economic activity for purely political reasons.

On behalf of the citizens of the Upper Delaware River Basin, their children, grandchildren and great grandchildren, I implore you to tell the governors of New York and Pennsylvania that there will be no more federal taxpayer bailouts for their wasteful states.  It is only through this very reasonable and responsible stance that, quite possibly, the natural gas resources we have beneath our feet can be harvested to assist our great nation maintain its energy independence, not to mention its sovereignty as a free people nation!

This letter was co-authored by Thomas Shepstone, also a member of the UDRBC Board of Directors.  We both thank you very much for your time and assistance in this matter.

Thomas J. Shepstone
Member of Board of Directors of UDRBC