“The American people know Joe Biden will not ban fracking,” Harris said at the debate with Vice President Pence on October 7. “That is a fact. That is a fact.”

Biden indicated that he would ban new hydraulic fracturing in his debate with Bernie Sanders in March 2020, although he would not admit to the ban plan when campaigning in Pennsylvania this summer. Also, in September 2019 during a CNN town hall event, Kamala Harris said “There is no question I am in favor of banning fracking.” 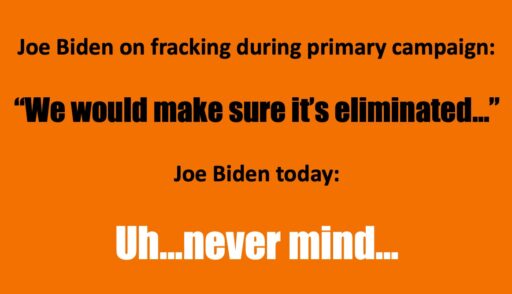 The fact that Harris and Biden both have flip-flopped on the issue of banning fracking in order to win the state of Pennsylvania should make the American people wonder what they will really do when it comes to the use of hydraulic fracturing and drilling for oil and natural gas in this country.

Biden’s policies of “clean energy” in the generation sector by 2035, which means removing 63 percent of our current dispatchable generation in 14 years, and his non-carbon future for the United States by 2050 means our entire energy system would have to change since the United States gets 80 percent of its energy from coal, oil, and natural gas. According to Vice President Pence during the debate, Biden’s 2050 mandate “would cost hundreds of thousands of American jobs all across the heartland.” Clearly, it will be an expensive undertaking, but how do you accomplish Biden’s mandates if the United States continues to produce and consume hydrocarbon fuels? Biden’s written policies and oral words clearly do not match.

According to CNN, during the Democratic primary, Biden sometimes suggested he was proposing to get rid of all fracking. CNN also notes that Biden’s written plan does propose “banning new oil and gas permitting on public lands and waters.” Adding to the confusion is this exchange with CNN’s Dana Bash during a July 2019 debate: Bash: “Thank you, Mr. Vice President. Just to clarify, would there be any place for fossil fuels, including coal and fracking, in a Biden administration?” Biden: “No, we would—we would work it out. We would make sure it’s eliminated and no more subsidies for either one of those, either—any fossil fuel.”

It is not surprising that the public is confused since Biden is himself. Recent polling of natural gas-producing counties of western Pennsylvania and eastern Ohio shows Biden has not been entirely successful lying to the American public. A poll by ALG Research of 500 likely voters in Ohio and Pennsylvania where fracking is used to produce natural gas showed voters in those counties do not trust Biden’s stance on energy, with 22 percent saying he is pro-natural gas, 42 percent saying he is anti-natural gas, and 36 percent not sure. In contrast, a larger percentage, 65 percent of those polled, are sure President Trump is pro-natural gas.

Joe Biden’s $2 trillion climate plan would indeed cost $2 trillion and most likely much more since it would be forcing the retirement of perfectly good generating technologies—many of them already paid for by consumers — that can operate for decades and replace them with wind and solar technologies that consumers would be forced to pay for that are unreliable as the recent black-outs in California have shown. And, Biden wants to do that by 2035—10 years earlier than California’s own goal, which is raising questions about its achievability. Wind and solar technologies also require massive new transmission lines and upgrades to the electrical system as they are not usually sited near load centers where traditional technologies are sited.

One estimate of the Green New Deal that Representative Alexandria Ocasio-Cortez and Senator Edward Markey proposed totals $93 trillion. However, no one really knows how much that Green New Deal would cost because it is a set of lofty ambitions and ideas on changing the entire U.S. economy, not just the energy sector.

In fact, the Washington Post reported that Congresswoman Alexandria Ocasio- Cortez’s Chief of Staff, Saikat Chakrabarti, described it thusly:  “The interesting thing about the Green New Deal,” he said, “is it wasn’t originally a climate thing at all.” Ricketts, climate director for Washington Governor Jay Inslee, greeted this startling notion with an attentive poker face. “Do you guys think of it as a climate thing?” Chakrabarti continued. “Because we really think of it as a how-do-you-change-the-entire-economy thing.”  Therefore, it is not legislation or regulations whose numbers can be calculated with any rigor, though some economists agree that the $93 trillion figure is in the ballpark for that plan, given its goals of overturning major aspects of every part of the U.S. economy.

As an example of just one cost, consider that both Biden’s plan and the Green New Deal would eliminate gasoline-powered vehicles in favor of electric vehicles. According to a study by the CO2 Coalition, that goal would require a $10 tax increase on a single gallon of gas. In order to make electric cars desirable to consumers, gasoline prices would have to increase to $13 per gallon. Such a tax would undoubtedly harm consumers and the U.S. economy.

Vice Presidential Candidate Kamala Harris and Presidential Candidate Joe Biden both have extreme policies for the U.S. energy sector that will cost American consumers and taxpayers trillions because perfectly good generating technologies, vehicles, industrial processes, etc. would need to be scrapped and rebuilt to their new radical standard of non-carbon energy. America’s abundant and affordable coal, oil, and natural gas have enabled this country to prosper and have made America energy independent once again. All that will be given up, to the benefit of China, which controls rare earth and other key metals needed for solar and wind farms, weapons, cell phones, and other technologies that Biden and Harris deem acceptable.