The Biden energy debacle started with  his campaign promise: “No more subsidies for the fossil fuel industry. No more drilling including offshore. No ability for the oil industry to continue to drill period. It ends.”

That President Biden is now asking the U.S. oil industry to produce more is ironic after taking steps to do just the opposite. Further, he has little understanding of the workings of the industry when he stated: “U.S. producers “have 9,000 permits to drill now — they can be drilling right now, yesterday last week, last year. They have 9,000 to drill onshore that are already approved. So let me be clear, let me be clear: they are not using them for production now.”

What Biden is probably referring to are leases, not permits. A mineral lease is the exclusive rights to the mineral resources under a tract of land or seafloor that are awarded to the high bidders in competitive lease sales. Federal leases generally have 5 to 10 year primary terms, in which the winning lease holder pays rents to hold the lease. Once the lease holder receives permission to perform the appropriate exploratory tests and sets up the required infrastructure for drilling, the leaseholder applies for further permits to drill wells. Permits are good for two years, with the possibility of a two-year extension. Once the wells are producing, the leaseholder must pay royalties on the product(s) produced.

In the fall of 2020, with Biden leading in the polls, oil and gas companies filed for permits and permit renewals, mostly in New Mexico and Wyoming, where much of the drilling on federal lands takes place, realizing that the nation will still need oil and gas for many years into the future and aided by speedier permitting approvals under the Trump Administration. They were responding to fears that Biden’s pledges to have no “drilling, period” might prove true.

Processing times for completed applications to the Bureau of Land Management (BLM) dropped from almost 140 days on average in the last year of Obama’s administration to 44 days in fiscal year 2019 under Trump. Companies submitted more than 3,000 drilling permit applications in a three-month period that included the election. Department of Interior officials approved almost 1,400 drilling applications, which is the highest number of approvals for that amount of time during Trump’s four-year term.

However, while the Biden Administration continued to approve drilling permits, the rate of approval declined most likely due to an agency pivot toward Biden’s climate agenda and a continuation of his Administration’s war on the oil and gas industry. The drop was especially dramatic in August, according to BLM data. BLM issued 171 drilling permit applications in August—a 75 percent drop since April, when it approved 671 permits. The approvals remained more than 50 percent less than the April approvals for the rest of the calendar year as the graph below shows. 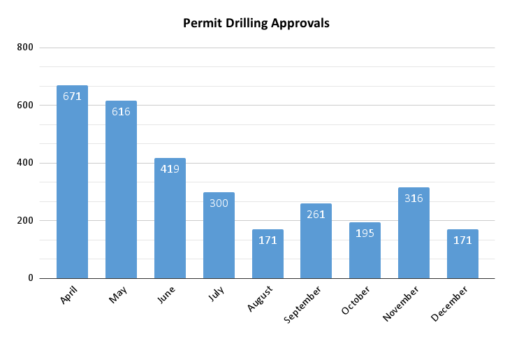 The slowdown in approvals shows the Biden administration began curtailing oil and gas permitting in the summer to focus mainly on renewable energy development as COP26 was just a few months away. The data suggest the administration wants to show that it is meeting its obligation to issue permits for existing leases while avoiding further legal challenges so that it can turn toward implementing its climate agenda.

The following chart from BLM shows the increasing time to approve a permit in FY 2021 from FY 2020, with the average increasing by 30 days—from 59 to 89. Also note that almost 4 months of FY 2021 was when the Trump administration was processing the voluminous number of permit applications that were filed in the fall of 2020 as noted above. 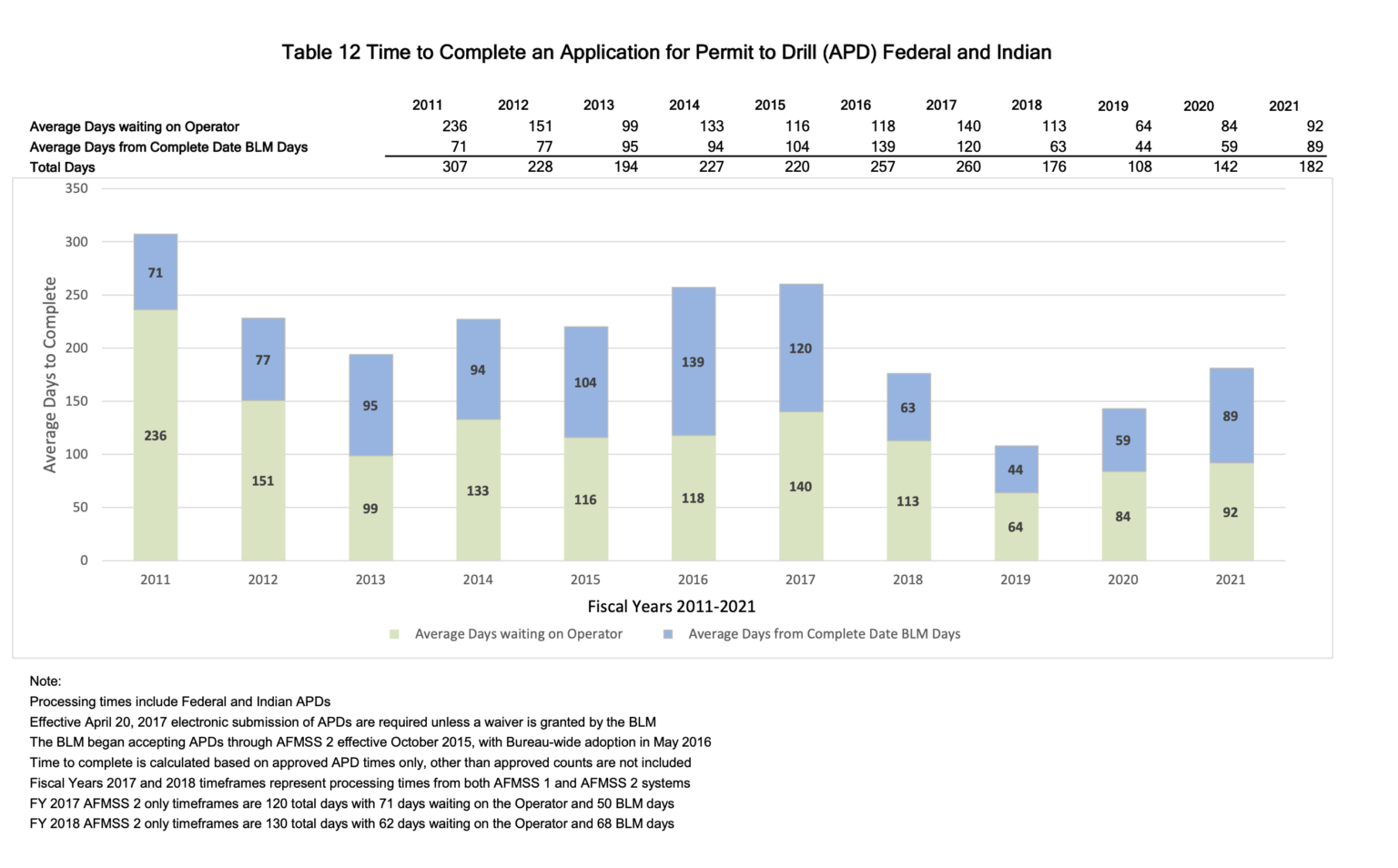 A further delay in permit approvals for oil and gas drilling can be expected. More recently, the Interior Department indicated that permits to drill for oil and gas on U.S. public land will be delayed due to a federal judge ruling against the Biden administration’s estimates of the social costs of greenhouse gas emissions. A Biden executive order in 2021 directed federal agencies to weigh environmental permitting and regulatory decisions by considering a metric for estimating the societal costs from carbon dioxide associated with those moves.

A Louisiana-based federal district judge in February blocked federal agencies from using that “social cost of carbon” plan, following a lawsuit by Louisiana and other states challenging the way it was imposed. The social cost of carbon is a government creation that seeks to assess the costs and benefits of a project based upon its potential impact on carbon dioxide. The higher the number, the more government can justify its decision to oppose a fossil fuel project or action.

Because the court ruling bars the federal government from adopting or relying on the metric, in the short term, the Biden administration argues it disrupts current work on federal drilling permits as well as new regulations. For instance, according to the Interior Department, the injunction is expected to lead to delays in permitting and leasing for federal oil and gas programs.

The Justice Department told the court that at least 27 environmental reviews at the Interior Department are affected. “The injunction has halted work” on applications for permits to drill on “at least 18 wells on federal oil and gas leases in New Mexico.” Some have suggested this is a convenient excuse to justify further implementation of President Biden’s promises of “no drilling, period.” The Biden administration is currently sitting on over 4,000 unprocessed permit applications.

Department of Interior data show the Biden administration is continuing its war against U.S. oil and gas companies by delaying permit approvals despite the rhetoric of Joe Biden and Jen Psaki that the administration has done nothing to affect lower U.S. oil output. BLM is clearly approving fewer permits to drill and taking longer to process a permit. And, according to the Interior Department, the industry can expect further delays as a judge tossed out the administration’s social cost of carbon metric.

Editor’s Note: So, now you have the truth. Biden’s lies, Psaki’s lies and the ideologically blinded, financially compromised and generally incompetent administration of this White House occupant are just additional features of the Biden energy debacle, a debacle that has raised energy prices everywhere, created energy insecurity throughout the world and invited Russian attacks on Ukraine. It is one huge disaster and yet the debacle continues as Biden refuses to say he can do anything about high prices, doubles down on green eggs and scam and entertain foolish ideas about declaring a “climate emergency” that simply doesn’t exist. Biden is living in an alternate universe where up is down, in is out, top is down and wrong is right. The worst leader EVER.