[Editor’s Note: Clueless Joe Biden is following a totalitarian script from his advisors. It’s a fast trip to disaster and will engulf him, hopefully before he destroys us all.]

Anticipating earlier in December that Senator Joe Manchin (D-WV) might scuttle his climate plan (which he did Dec. 19 on Fox News), President Biden signed an Executive Order commanding that all the electricity that the federal government uses be from “100 percent carbon pollution-free” sources by 2030. 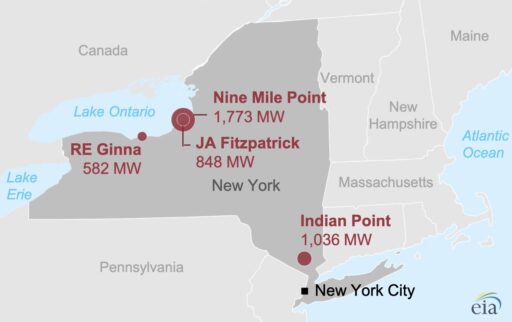 Indian Point is now gone, leaving New York with only three nuclear facilities and the state is trying to make the loss with intermittent solar and wind.

The order means that federal juice either has to come from zero-emission sources (like solar and wind) or that any carbon dioxide emissions be sequestered away, which usually means burying them underground. There hasn’t been sufficient success with this “sequestration” to make any dent in the growing global emissions curve. Biden’s non-carbon dioxide sources explicitly include electricity from nuclear fission, which his green allies are doing their best to put out of business.

Our Energy Information Agency (EIA) claims fully 40% of our power is already carbon dioxide-free, with 20% from “renewable” solar energy, wind turbines and hydroelectric facilities and 20% from nuclear.

Nuclear is pretty much off the table. California is about to shut its lone nuke at Diablo Canyon, which supplies nearly 10% of the state’s power. Last April, (then) Governor Cuomo shut down one of New York’s, the Indian Point plant, which the AP cheekily headlined “Gone Fission”. There are three reactors remaining in the state.

So how is the government going to come up with the remaining 60% of electricity by 2030, which now comes mainly from natural gas (40%) and coal (20%)? It won’t be made up with nuclear, as there’s only one new plant in the current pipeline, Georgia Power’s Vogtle plant, scheduled for a 2024 completion. There’s not likely to be any other until after 2030.

Biden’s order means that all of this power is going to come from wind and solar. (Non-emitting new hydropower is a political nonstarter.) But they are terribly unreliable. The sun is below the horizon half of the time, and too close to it to produce much electricity for at least an hour after sunrise and before sunset. Ninety percent of incoming solar radiation can be blocked by dense overcast. And some of the coldest temperatures occur when the wind doesn’t stir the air, which also peaks electricity demand with no supply from the wind.

Because a stable electrical grid requires stable power, quick backup can only be provided by maintaining a large reserve of gas-fired generators. The importance of this became obvious last February in Texas , when improperly insulated gas plants couldn’t make up for shortages in wind generation. The Texas grid, which is independent from the rest of the country, came to within minutes of a complete black crash, restarting from which would take up to a month. Given the cold temperatures, that would have been one of the greatest disasters in U.S. history.

Besides courting disaster, Biden’s Executive Order is fantasy. The government can’t deploy enough solar and wind — let alone making it reliable — to supply all of its power without carbon dioxide emissions. There is no battery technology that can reliably accommodate for the intermittent failures of wind and solar. Protecting this fragile grid from its obvious inability to supply a steady stream of power 24/7 will require massive backup from a nimble source like natural gas.

It’s not clear at all that Biden — or whomever is handing him the note cards before he faces the camera — is interacting with reality when ordering the federal government to do what is simply impossible.

Fortunately, people are catching on. The likelihood that he will have any legislative authority after next years’ election is vanishingly small. The Democrat Party made a deal with unreality when it thought it could push such a weak and compromised president for four years without an intervening electoral disaster. Barack Obama lost 65 house seats because of political overreach in the 2010 congressional races. Biden’s poll numbers — as shown by the generic congressional ballot — are even worse, much worse. Currently, the largest repudiation of a governing political party in U.S. history seems not only possible but likely.

Dr. Patrick J. Michaels is a Senior Fellow at the CO2 Coalition in Arlington VA, Virginia State Climatologist 1980-2007, and Past-President of the American Association of State Climatologists. He also serves on the Board of Directors of the Science and Environmental Policy Project

This commentary was first published January 2, 2022 at the Washington Times