[Editor’s Note: The DC District Court of Appeals has scuttled Big Green plans to kill the NEXUS pipeline project that will send Utica Shale into Michigan and neighboring Canada.]

Last year Big Green lobbyists using the City of Oberlin, Ohio contested the Federal Energy Regulatory Commission (FERC) decision to approve the Enbridge/DTE Energy NEXUS pipeline, a $2 billion, 255-mile pipeline from the Ohio Utica Shale into Michigan that’s been flowing for years connecting to a pipeline that exports some of the gas into Canada (see Oberlin, OH Still Fighting to Shut Down Long-Running NEXUS Pipe). Big Green/Oberlin claimed FERC’s approval of NEXUS was faulty because some gas gets exported to Canada and is not “in the public interest.” A federal court ruled last week against Oberlin, siding with FERC’s decision to approve the NEXUS project. 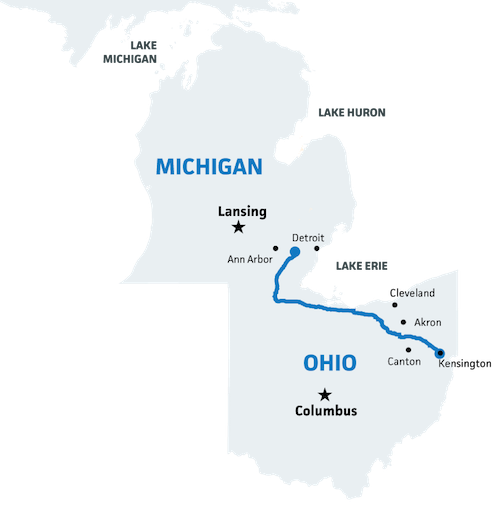 Specifically, the sleazy tactic employed by Big Green and their patsies in Oberlin was to claim that FERC should not have approved the project’s use of eminent domain because some of the gas will get exported. Antis were hoping to overturn the approval of NEXUS and shut it down.

Even if you take all of the gas out of NEXUS that goes to Canada, FERC said enough gas stays right here and is used in the U.S. to justify the NEXUS project anyway, without exports.

Last week three judges from the U.S. District Court of Appeals for the District of Columbia (the D.C. Circuit) said FERC has adequately justified its decision to approve the project:

The Federal Energy Regulatory Commission justified its approval of the Nexus Gas Transmission project, which carries gas for domestic and Canadian customers, a federal appeals court ruled Friday, rejecting arguments from the City of Oberlin, Ohio, that FERC improperly considered international customers when it determined in 2017 that the project was needed and deserved approval.

FERC’s justification after the case was remanded to it for further explanation “is rational and comports with the Natural Gas Act,” said the US Court of Appeals for the District of Columbia Circuit in a ruling July 8.

Rejecting the city’s two main arguments against the pipeline’s approval, the court concluded that FERC could use precedent agreements with international customers in its analysis of whether the pipeline was needed, and that the limited amount of capacity subscribed, 59%, did not foreclose approval of the pipeline.

Nexus, which began operating in 2018, carries gas from the Utica shale in eastern Ohio into Michigan and connections with other pipelines that serve the gas storage hub in Dawn, Ontario. The court decision follows years of fighting over use of eminent domain to build the pipeline supported by precedent agreements with domestic and Canadian customers. The City of Oberlin was the lone holdout that had not reached an agreement on land access with Nexus owners DT Midstream and Enbridge.

Oberlin argued that the precedent agreements with Canadian customers did not merit consideration under Section 7 of the Natural Gas Act since gas exports are considered under Section 3, and that without them the contracted capacity amounted to 42% of Nexus’ capacity, which is not sufficient for approval and use of eminent domain authority that comes with FERC authorization.

The city lost on both points in the July 8 decision.

“Nothing in Section 7 prohibits considering export precedent agreements in the public convenience and necessity analysis,” the three-judge panel concluded in the opinion written by Judge Neomi Rao. “FERC considered the export precedent agreements as one of the many factors in determining the public convenience and necessity, and thus did not conflate Sections 3 and 7” of the NGA, the court said.

The opinion included a footnote that says “We need not, and do not, decide whether it is within FERC’s Section 7 authority to grant a certificate for a pipeline that crosses state lines but exclusively transports gas ultimately bound for export.”

That likely will come up in other cases where groups have challenged FERC approval of interstate pipelines solely to feed liquefied natural gas export facilities, said Carolyn Elefant, an attorney representing the City of Oberlin, in a brief interview. The clarification in the footnote is a big deal and opens the door for groups to raise legal arguments on pipelines service export facilities, she said.

The court made a distinction with Nexus because gas for domestic shippers and Canadian shippers is comingled within the pipeline, and found it undisputable that Nexus is transporting gas in interstate commerce. “We agree with FERC’s decision to treat the Nexus Project as a Section 7 pipeline, as opposed to a Section 3 export facility, even though some of the gas transported in it will ultimately be exported,” the court said.

The court also agreed with FERC’s explanation that the capacity subscription level of Nexus merited approval at either 59% capacity, when all precedent agreements are considered, or 42% capacity if Canadian contracts are excluded. The commission asserted that the benefits of the project supported a pipeline that size, and that Nexus was able to gain access to 93% of the land involved without use of eminent domain. FERC also found that Nexus was needed to alleviate a bottleneck in the capacity to transport gas to markets outside of the Appalachian Basin and the court agreed with the reasoning.

“We find FERC’s independent and alternative reasons for approving the pipeline without considering the export precedent agreements to be reasonable. There is no floor on the subscription rate needed for FERC to find a pipeline is or will be in the public convenience and necessity,” the court said.

Senior Circuit Judge David Sentelle concurred on part of the decision dealing with precedent agreements for exports but did not write separately on that.

Editor’s Note: The author of this important opinion is Neomi Rao, a native of Detroit, Michigan pointed to the DC Circuit Court of Appeals by President Donald Trump, demonstrating, yet again, the most important legacy of Presidents is often the judges they appoint. And, despite what mercurial Chief Justice John Roberts said about there being no “Obama judges” or “Trump judges” this makes all the difference. Democrat appointed judges want to be legislators and remake the law themselves from the bench. Republican appointed judges are more likely to stick with interpreting the law as opposed to legislating although no judge is ever completely above the temptation to simply rule. Compare this decision to the horrible Big Green sycophancy of the Fourth Circuit that keeps lending its hand to trying to stop the Mountain Valley Pipeline. Judges matter bigly and the trade unions who supported Biden ought to start acting accordingly.