Blackout Redux: We Now Know What Not to Do About Energy Policy

…
[Editor’s Note: Looking back at the Texas blackout one thing we have learned is not to rely on government energy policy for our energy security.]

There has been a lot of finger-pointing in the aftermath of the February blackout in Texas—with ire directed toward the state’s governor, the grid operator, the power generators, and the federal government among others. While no single, firm answer can explain the crisis, it is clear that many Texans suffered: over 4 million electricity customers had to do without power for days during the blackout, many of those with power received enormous bills, and, most tragically, dozens of people died.

Biden’s Department of Energy Did Not Help Texas

Certain facts are apparent. Wind energy went from producing over 40 percent of the state’s generation before the freeze to a small fraction during the freeze, resulting in coal, natural gas, and nuclear power generating the lion’s share. While wind generation faltered and natural gas supplies were prioritized to meet home heating needs, coal capacity picked up the slack.

Despite renewable proponents believing that the intermittency of solar and wind power can be managed with energy storage and massive investments in new transmission infrastructure, the truth is that grid-scale energy storage is too expensive and building new, cross-country high-voltage transmission lines is also expensive, as well as being difficult and political in nature. Texas was lucky to have coal, natural gas, and nuclear capacity to take up the slack. Yet, President Biden wants the United States to put all its eggs in one basket. His plan would make the United States dependent on electricity generated mainly by renewable energy and provide that energy for the entire energy system, at tremendous cost to taxpayers and consumers. 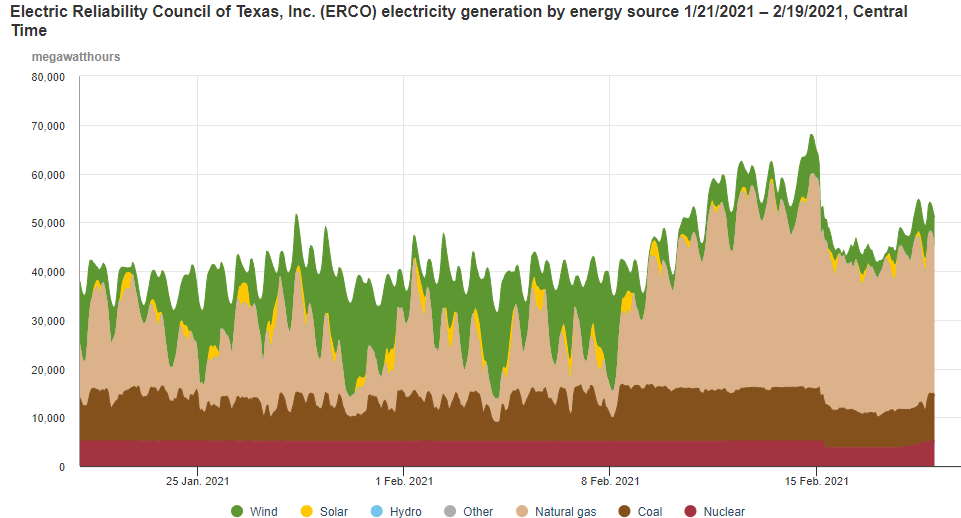 Texas Governor Abbott declared a state of disaster on February 12, 2021 and asked Biden’s Department of Energy (DOE) to lift federal regulations that limited emissions from the state’s electricity sector. But the Emergency Order 202-21-1 issued by the Biden administration’s Department of Energy on February 14, 2021 told the Texas energy grid operator ERCOT to use all means possible to remain within the regulated standards.

According to DOE’s order, “…ERCOT shall ensure that such Specified Resource is only allowed to exceed any such limit during a period for which ERCOT has declared an Energy Emergency Alert (EEA) Level 2 or Level 3. This incremental amount of restricted capacity would be offered at a price no lower than $1,500 MWh.” Rather than trying to help during frigid cold weather, the Biden administration stuck to the book on outdoor emissions, even though most residents were huddled inside their homes trying to stay warm.

Many Texas residents face enormous bills for the electricity they used during the storm. Residents with variable-rate power plans are being hit the hardest because the plans charge different prices for electricity depending on how much demand there is. The more demand, the higher the price. These plans are enticing to many customers because the price of electricity is often low during normal weather conditions and because it allows people to use more electricity when the price is lower—for example, by running appliances such as dishwashers overnight. When the winter storm hit Texas’ grid, the wholesale price of electricity skyrocketed to $9 per kilowatt-hour or $9000 per megawatt hour from an average residential price for electricity in the winter of less than 12 cents per kilowatt-hour—an increase by a factor of 750! The $9,000 per megawatt hour price is in line with DOE guidance above.

One electricity bill received by a 63-year-old Army veteran who lives on Social Security payments in a Dallas suburb was $16,752—70 times what he usually pays for all of his utilities combined. The surge in power prices resulted in a cost of $900 for charging a Tesla when the typical full charge of a Tesla costs around $18 using a Level 1 or Level 2 charger at home based on an average price of $0.14 per kilowatt hour.

Unlike other U.S. energy markets, Texas does not have a capacity market. By design the state relies solely upon its energy market. This means that entities profit only from the actual energy they sell into the system. The entities do not see profit from stand by capacity ready for emergencies. The energy only market works well under normal conditions to keep prices down. Unlike the traditional approach where specific entities have responsibilities to meet peak levels, in Texas the responsibility is diffuse and unassigned. There is no significant long term motivation for entities to ensure extra capacity just in case it may be needed during extreme conditions (to prevent a blackout, for instance)

For high levels of renewable penetration, you need a system where consumers’ dollars applied to renewable generators are maximized. Rewarding resources for offering capacity advantages penalizes renewables and aids traditional technologies. An energy only market fuels diversification towards intermittent resources because it rewards energy fed into the grid, not backup power. An energy only market helps to make wind and solar more competitive.

Brazos Electric Power Cooperative, which supplies electricity to more than 660,000 consumers across Texas, is one of dozens of providers facing enormous charges. Utilities and power marketers are collectively facing billions of dollars in blackout-related charges. Brazos and others that committed to provide power to the grid—and could not—were required to buy replacement power at high rates and cover other firms’ unpaid fees. The Electric Reliability Council of Texas indicated that $2.46 billion in bills were unpaid. ERCOT acts in part as a clearinghouse, collecting from power buyers and paying those who provide the electricity. ERCOT’s $2.1 billion invoice to Brazos was nearly three times the cooperative’s power costs for all of 2020. Brazos responded by issuing a notice of force majeure.

The city of Denton sued ERCOT in a state court to prevent it from charging the city for amounts uncollected from grid users. Texas employer Textron Inc. urged the Public Utility Commission to roll back power charges. And, the Texas attorney general launched an investigation into the blackout, calling for ERCOT and others to provide documents on the outages and pricing.

As the losses, lawsuits, and bankruptcies pile up, the issue is when the state will rescue the Electric Reliability Council of Texas and how much it will cost. A bailout is inevitable because the Texas Legislature created ERCOT’s energy-only electricity market, the state has the authority to fix the problem, and the state has the financial resources that will be needed. There is another hard fact: much of the cost of the multi-billion-dollar bailout will be borne by ratepayers, and in particular, low- and middle-income Texans.

President Biden and his administration seems unaware of the cost to the taxpayer and the ratepayer that his ambitious renewable program will entail. He and the Congress are racing ahead to push aside the energy sources that are the foundation of the grid and that provide reliable, resilient baseload power. The result will likely be a nationwide disaster. The United States has seen the consequences of over reliance on intermittent wind and solar power both in California and Texas where blackouts were the result.

Further, grid mismanagement in Texas has cost lives and created enormous electricity bills. It is important that all Americans understand the limits of generating technologies so that they can be informed of the realities of depending on one energy source—electricity—being produced mainly by intermittent renewable energy. Diversity of supply was the motto for many decades within the United States because of its benefits to reliability and grid stability, but Biden’s people act like they’ve never heard of it.