[Editor’s Note: BlackRock is the Big Kahuna in corporatist profiteering and rent-collecting from us; but the ESG prophet has hit a big snag in Texas, which knows how to fight.]

So far two states (that we are aware of) are either threatening, or already are, removing state investments from any funds managed by BlackRock Inc. Other states are considering it. We told you about West Virginia removing its investments with BlackRock back in January (see Hooray! WV Fights Back, State Drops Investments with BlackRock Fund). And, last year Texas voted to divest from companies like BlackRock that try to pressure investors to divest from fossil fuels. 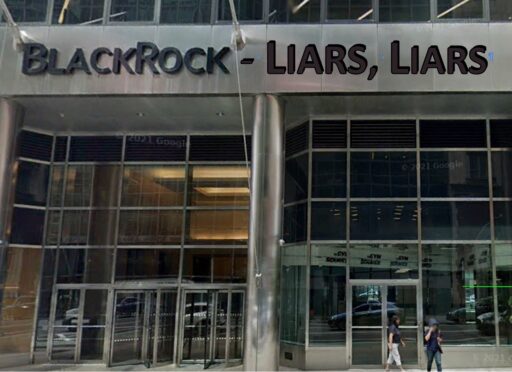 It’s taken all this time, but the Texas State Comptroller’s office is now considering its next steps and which companies to divest from. BlackRock is at the top of list. The company is scared (as it should be), furiously trying to backpedal on its statements to divest from fossil energy.

It’s time to fight fire with fire. If big investment firms like BlackRock advocate for divesting from fossil energy under the banner of “net-zero” investing, then it’s time to dump BlackRock.

Of course, it won’t be easy, as David Blackmon points out in the Forbes article below. What actually constitutes a company that encourages or pressures investors to divest? Does BlackRock qualify as advocating for divestment? (We sure think they do.)

Last week saw numerous reports about a letter BlackRock executives sent to the State of Texas which claims that the firm has never advocated for the divestment movement and “will continue to invest in and support fossil fuel companies, including Texas fossil fuel companies.”

The letter came in response to a new law passed last year by the Texas legislature and signed by Governor Greg Abbott that will require the Texas State Comptroller’s office to create and maintain a list of banks and investment firms that refuse to invest in the Texas oil and gas industry or otherwise disadvantage it. The companies who make their way onto the list will be excluded from participation in Texas’s various state-managed pension funds.

The precipitating factor for BlackRock’s management may have been the letter sent on January 19 by Texas Lt. Governor Dan Patrick to Comptroller Glenn Hegar asking him to give BlackRock some special attention: “As you prepare the official list of companies that boycott energy companies, I ask that you include BlackRock, and any company like them, that choose to hurt Texas oil and gas energy companies by boycotting them in violation of Senate Bill 13,” Patrick wrote.

Patrick said that, despite assurances he had received from BlackRock representatives in a recent meeting, he still had “grave concerns” about their intent, citing the company’s support for a “net-zero” world as his driving factor. “Just yesterday, BlackRock Chairman and CEO, Larry Fink, issued his annual 2022 letter to CEOs indicating that BlackRock’s goal is to transition to a “net zero” world, including decarbonizing the energy sector. Needless to say, it is highly inconsistent to claim support for Texas’ oil and gas energy industry while leading a “net zero” policy effort that will destroy the oil and gas industry and destabilize the economy worldwide,” he added.

Obviously, as far as the Lt. Governor is concerned, BlackRock can’t have this argument both ways: It can’t claim on the one hand to “support” the industry while on the other hand working to eliminate it if it wishes to maintain its multi-billion dollar involvement in Texas pension funds. If Comptroller Hegar has a differing opinion on the matter, he isn’t saying just yet.

BlackRock does maintain positions in some oil and gas firms, including ExxonMobil and ConocoPhillips. Under the new law, it seems one question Hegar should ask of the firm is which parts of those and other oil and gas company operations do its investments support, and are any of those projects located in Texas? A firm like BlackRock could invest billions in either of those two energy giants without supporting the drilling of a single well or – in ExxonMobil’s case – the refining of a single barrel of oil in Texas. It would also be possible for BlackRock to fund projects within huge companies that do not relate to oil and gas at all.

BlackRock could technically do any of those things and still be able to maintain that the carefully-worded statements made in its letter are accurate. It does invest in certain oil and gas companies, and it certainly wants those companies to remain healthy and prosperous.

The Lt. Governor’s concerns about BlackRock’s advocacy for a “net-zero” world in a few decades are accurately-grounded as well: There is no question that BlackRock supports that goal and has provided the divestment movement with plenty of ammunition to use in its propaganda efforts. An April, 2021 New Yorker piece authored by noted divestment movement advocate Bill McKibben detailed some of the firm’s efforts in that regard.

In that piece, McKibben discussed a research project BlackRock conducted in 2020 on behalf of the New York City teachers’ and public employees pension funds that claims to show that no pension fund has suffered negative consequences after divesting from fossil fuels. McKibben uses the fact that the research was conducted by BlackRock as an argument to bolster its credibility, and the anti-fossil fuel Rockefeller Brothers Fund used BlackRock’s data to urge other funds to divest.

But BlackRock, perhaps sensing the potential blowback it might receive, issued a statement claiming that it “did not make a recommendation for TRS to divest from fossil fuel reserves. The research was meant to help TRS determine a path forward to meet their stated divestment goals.” But McKibben quotes Tom Sanzillo, Director of Financial Analysis for I.E.E.F.A., said in an interview that BlackRock’s findings were clear. “Any investment fund looking to protect itself against losses from coal, oil, and gas companies now has the largest investment house in the world showing them why, how, and when to protect themselves, the economy, and the planet.”

But Comptroller Hegar also must factor into his analysis the similar posturing on the “net-zero” question by many in the oil and gas industry today. If BlackRock can be accused of not supporting the Texas oil and gas industry by advocating for “net-zero,” what about major oil companies like ExxonMobil, BP, Shell, Chevron and Total, all of whom do business in Texas, and all of whom have announced a variety of “net-zero” pledges of their own? For that matter, what of the many big independent producers who drill wells in Texas and have made their own “net-zero” pledges?

Given those many promises made by many oil companies themselves to get to “net-zero” in their own operations, should BlackRock really be targeted by the State of Texas for supporting essentially the same solution to climate change as a global objective? Perhaps the firm isn’t on such thin ice after all.

Texas legislators probably thought this was all pretty simple when they wrote and passed their new law last year. Lt. Governor Patrick and Governor Abbott likely entertained similar thoughts. But I suspect Comptroller Hegar will find that putting together the list required by the law will not be such a simple endeavor at all.

Hey BlackRock–when you walk down the middle of the road, you get hit by traffic passing in both lanes. Pick a side.

Editor’s Note: I can only echo Jim’s plea to fight back against these stinking, rotten, no good corporatist charlatans. Texas and West Virginia have it exactly correct and Ohio and Pennsylvania should do the same. These fascist titans of thievery operating under the aegis of phony ESG in league with modern day Lex Luthors such as the World Economic Forum’s Klaus Schwab need to be fought, not accommodated.