[Editor’s Note: There’s no bigger corporatist outfit looking to score using government as its spear than BlackRock, but the real capitalists are fighting back against ESG and the like. May they defeat the chameleon!]

Efforts by brave states like Texas and West Virginia in fighting back against companies like BlackRock who demand divestment from any activity involving the extraction of fossil fuels is having an effect. The divestors are beginning to squeal like little piglets. In June 2021, Texas Gov. Greg Abbott signed a bill into law that bans state investments in banks, investors, and other companies that have cut ties with the oil and gas industry (see Texas Adopts Law Boycotting Banks & Investors that Boycott O&G).

It has taken a while, but Texas is finally working on the list of companies that the state (with the second-highest population in the country) will end doing business with. BlackRock is on the list and the company is begging the state not to cut ties. 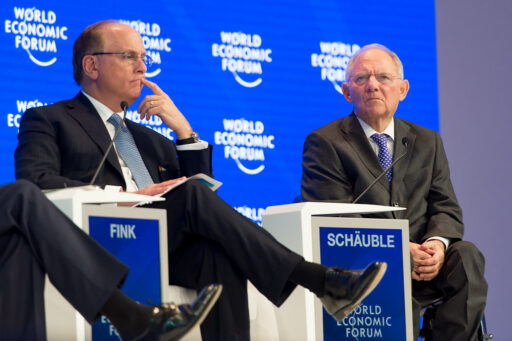 BlackRock CEO Larry Fink playing with his buddies at the World Economic Forum where corporatists, green grifters, hedge-funders, power-seeking politicians and other tyrants and wannabes gather to plot a new world order with themselves in charge using COVID, global warming and other excuses.

BlackRock is the largest investment firm in the world, with some $9.6 trillion (that’s with a “t”) under management. That’s more money than the GDP of all countries in the world except the U.S. and China, the world’s two largest economies. CEO Larry Fink has pushed companies to get on board with so-called ESG efforts–to reduce their carbon and other emissions. If BlackRock “encourages” someone to do something, they do it or the money dries up.

Now BlackRock is getting a taste of its own medicine and they don’t like the taste. Texas is about to divest from BlackRock, as is West Virginia (see Hooray! WV Fights Back, State Drops Investments with BlackRock Fund). Other states are considering similar measures to divest from the divestors.

The world’s largest asset manager oversees about $310 billion of investments in energy firms worldwide, including more than $115 billion in Texas companies, BlackRock said in a letter to state Comptroller Glenn Hegar.

“We do not boycott energy companies,” BlackRock’s Dalia Blass, head of external affairs, and Chief Client Officer Mark McCombe wrote in the May 13 letter, obtained through a public-records request. “On behalf of our clients, we are invested in industries and in communities across Texas.”

A spokesman for New York-based BlackRock declined to comment beyond the contents of the letter.

Chief Executive Officer Larry Fink has positioned BlackRock as a leading advocate of investing with environmental, social and governance goals in mind, saying that climate change is an investment risk.

The firm has been targeted by climate activists demanding even more rapid change and those who want the transition to clean energy to be more gradual. Last week, BlackRock said it won’t support efforts by investors who seek to micromanage companies through prescriptive shareholder resolutions.

BlackRock, with $9.6 trillion under management as of March 31, said its business model is to offer a wide range of investment funds and that it doesn’t dictate particular strategies that its clients must use. More than half of BlackRock’s US retail funds allocate some of their portfolios to energy companies, according to the letter.

BlackRock funds owned 6.5% of Irving, Texas-based Exxon Mobil Corp. and 8.3% of Houston-based ConocoPhillips as of March 31, making the asset manager the second-biggest investor in both companies, according to data compiled by Bloomberg.

Some clients choose funds that specifically exclude fossil fuels, and the firm has created seven US retail funds for this purpose, BlackRock said. These funds account for about 0.1% of US retail assets under management. Additional funds restrict certain types of energy or fossil fuel investments or prioritize companies that are advancing the world’s transition to cleaner energy.

The letter came in response to a March request from Hegar for detailed information from BlackRock and 18 other financial firms about their climate policies and energy investments.

A Texas law that took effect last year is designed to limit state business with companies that restrict investment in the oil and gas industry. Hegar is in the process of devising a list of those deemed to be boycotting the sector.*

You can’t have it both ways. Either you are divesting, forcing fossil energy companies to stop extracting oil and gas and “move on” to other forms of energy, or you are not. Clearly, BlackRock is in the camp of forcing companies to get out of the carbon-based energy business. They are diverstors. And they need to be dumped by anyone and everyone who cares about freedom and the right to choose fossil energy. It is time to divest from the divesters–including BlackRock.

BlackRock can squeal and carry on and protest all they want that they aren’t “forcing” anyone to divest. Horse manure! We have their number. Larry Fink is fossil energy public enemy #1. In fact, we hope a Republican-controlled Congress takes a very close look at breaking up BlackRock for anti-trust violations. In the meantime, let’s “break them up” on our own–by divesting from them. Texas is about to do it, as is West Virginia and possibly a few other states (including Indiana). About darned time.

Don’t fall for the “but we invest in Exxon, ConocoPhillips, and the like” bull routine offered up by BlackRock. They invest in those companies as a way of forcing them out of fossil energy, not because they love fossil energy companies.

[Editor’s Note: The World Economic Forum, which is behind so much of the corporatism we see with the likes of BlackRock is all about shutting down oil and gas to make way for the trillions of potential green grifting offered by the illusory fight against global warming. They are meeting now in Europe at the same time and location as the utterly despicable World Health Organization and conspiring to put everyone else in their place (a must-read piece that that will send shivers up your spine). Guess who’s there, too? Well, Pennsylvania Senator Pat Toomey and Rep. Dan Meuser, two Republicans, along with Algore and a slew of Democrat politicians and private-jetting corporatists galore. Wonder why the trust in our institutions is dropping like a BlackRock? Look no further.]