BX3 Supply & Rental Is Part of the Shale Revolution!

…
[Editor’s Note: BX3 Supply & Rental is living proof of the multiplier benefits of the Marcellus shale revolution in Northeastern Pennsylvania]

This month, our contractor spotlight shines on BX3 Supply & Rental owner and president Bill Kelley. The Springville resident and 1970 Elk Lake High School graduate got his first lessons in management from Tom Quigg, who owned and operated a chain of gas stations that would become Pump N Pantry. 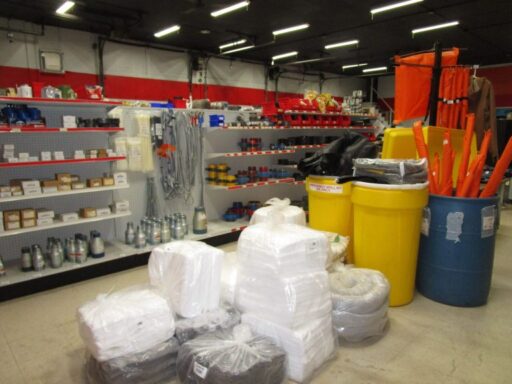 Bill gained more experience through some business ventures of his own. He was semi-retired when his son, Bill Kelley II, encouraged him to start a new business so the younger Bill could move back to the area.

They started Taylor Rental in Montrose in 2006 and opened a Tunkhannock office in 2008. They moved to their current location in Tunkhannock in 2012. Initially, the company rented tools and heavy equipment to small contractors and homeowners. That is still a big part of their overall operations, but things escalated quickly when the Marcellus shale industry began to grow.

“When the gas companies came to town, we listened,” Bill recalled. “They taught me the business, and they helped me learn the language.”

At first, Taylor rented light towers, excavators, skid steers and generators. “We customized our inventory to what they needed,” Bill noted. “They’ve given us a lot of opportunities, and we grew like crazy because of them.”

As the scope of the industry expanded, Bill and his board realized they needed a new business model to meet ever-changing needs. Bill began bidding out equipment to sell directly to the gas companies and their industry partners.

“We try to have what the guys need on the shelves here,” Bill remarked. “We are customer-driven. The customer tells us what they need, and we get it for them.” 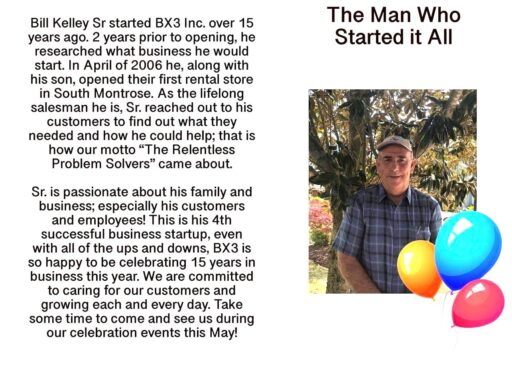 That courtesy still extends to the homeowners and contractors who need rototillers, cement mixers and stump grinders. In fact, Bill insisted working with the public is still his favorite part of the job. He also takes pride in coaching his employees to success.

While the business was always locally owned and family operated, Taylor Rental was part of a co-op franchise owned by True Value. When it came time to renew the contract in 2018, Bill and his board opted out. The original corporation name of BX3 was tapped as the new name of the business, and all the product lines and services were reevaluated.

As the company nears its 15th anniversary, it is undergoing a period of transition, leaning on the younger generation to take over the responsibilities of the business. John Sprout, who has been with the company for about nine years is the new general manager.

As Bill looks at another opportunity to step back from the day-to-day operations, he faces the challenge to build back a crew that downsized when there was a lull in the gas industry. BX3 needs truck drivers, mechanics, management trainees and counter help. The problem is that the workforce has changed forever by the pandemic. “There are good people out there,” Bill maintains. “You just have to look harder to find them.”

BX3 Supply & Rental celebrated their 15 years in business with open house events at the Tunkhannock store on May 15 and will do so again in Montrose on May 22. There will be yard sales, equipment demos and cookouts. 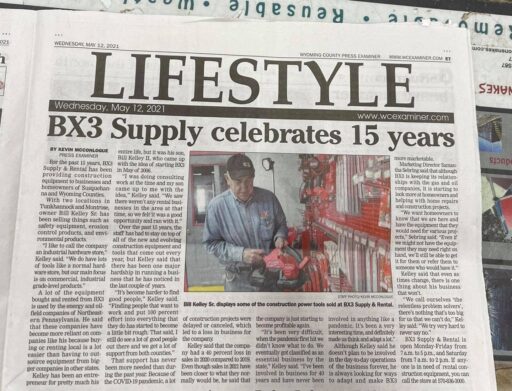