First Block Island, offshore Rhode Island, and now wind farms offshore Europe are experiencing problems with transmission cables requiring millions of dollars of investments. The Block Island offshore wind farm, a 30-megawatt facility off the coast of Rhode Island, found that its high voltage cables that carry electricity to land were not buried deep enough and were being exposed as the seabed was being worn away by tides and storms, making the exposed cables dangerous to swimmers.

National Grid and Ørsted, the current owner, are replacing the cable to a greater depth, which state regulators had originally wanted, but were over-ruled by a state board supportive of the project. National Grid, which owns the cable that connects the island to the mainland, will charge customers of the Narragansett Electric Company to fix its portion of the problem. National Grid’s reconstruction cost is expected to be $30 million and it will be recovered through an undetermined surcharge on ratepayers’ bills. Ørsted’s cost, which cannot be passed on, is unknown. This is a costly undertaking. 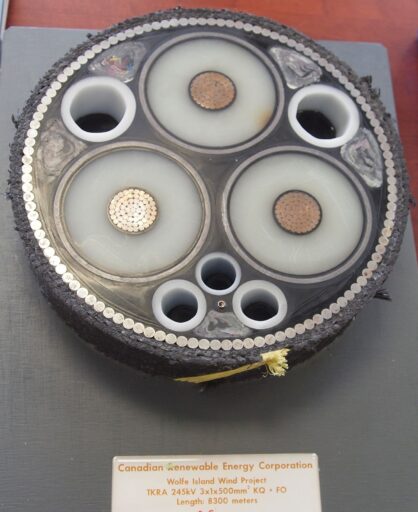 Ørsted, a Danish Company that is the world’s largest developer of offshore wind projects, also found that some of its transmission cables connecting wind farms to European towns have been damaged by scraping against rocks that had been placed on the seabed to prevent erosion. The cost to fix the problems will be as much as 3 billion Danish kroner ($489 million). The company identified 10 projects in the U.K. and Europe that used the same design and that may need to be repaired.

Some projects can be fixed by putting more rocks on top of the cables to make them stay in place. In other cases, the cables will have to be repaired or replaced, which is where the major cost is. Laying cables on top of rocks was the industry standard at the time these wind farms were built several years ago, but is no longer used by offshore wind developers. Ørsted may not be the only company facing these problems in Europe as other offshore wind farms may have similar issues with their cable layout.

Offshore wind farms involve a network of turbines with cables that connect to shore and into the power grid. The reconstruction project requires replacing approximately 520 meters of National Grid’s sea2shore submarine cable that carries electricity between Block Island and mainland Rhode Island, and approximately 945 meters of Ørsted’s subsea cable that carries electricity from the wind farm to Block Island. The original cables were installed in the spring/summer of 2016.

Ørsted and National Grid determined the best approach to maintain the required burial depths of the two transmission cables is to reinstall these limited segments with new sections adjacent to where the existing cables are now situated. The cable landings will be constructed using a horizontal directional drill and a conduit will be installed for the new length of onshore cable. The horizontal directional drill will bury the cables at a depth of between eight to 15 meters below the seafloor, compared with the current 1.2 to 1.8 meters.

The new cables will be spliced onto the existing cable that connects the Island, the wind project, and the mainland. The existing portions of the exposed cables are scheduled to be removed at the end of construction.

Block Island and Rhode Island will continue to receive electricity from the wind farm during the reconstruction, except for a brief outage when the new cable will be spliced with the existing cable. During the outage, Block Island Power Company will provide the needed electrical power to the Island using its on-island diesel generation. The anticipated project completion date is before the end of May 2021.

President Biden’s plan to reach net zero carbon dioxide emissions in the generating sector includes the installation of some 30,000 megawatts of new offshore wind capacity by 2030, the equivalent of 1,000 Block Island projects. Building 30,000 megawatts of capacity will require “massive industrialization” of the oceans, anchoring thousands of offshore platforms along the coasts that could pose significant threats to navigation, marine mammals and fisheries.

It is important to note that “capacity” is not “output” with intermittent renewable sources and that large offshore wind projects are expected to average a 51 percent “capacity factor” by 2022. Therefore, just over 15,000 megawatts of actual available power can be obtained from the 30,000 megawatts Biden has proposed.

Offshore wind is far  more expensive than other generating technologies, including coal, natural gas, nuclear power and onshore renewable energy, according to the Energy Information Administration. In 2026, the agency estimates that producing one megawatt-hour of electricity from offshore wind will cost about $121–almost double the cost of generating that same amount of energy with an advanced nuclear reactor ($69), more than three times the projected cost of producing it with natural gas ($37), and even more than coal ($73). Large increases in electricity prices will be particularly harmful to low- and middle-income consumers and particularly painful in New York and New England, where consumers already pay some of America’s highest electricity prices.

And, as Block Island and European offshore wind projects indicate, costly repairs may be needed as well after the wind farms are built.

The first-hand experience with the Block Island wind project is indicative of the future pitfalls that the U.S. offshore wind industry can expect as it continues toward replacing existing traditional generating technologies with offshore wind to meet Biden’s quotas. Offshore wind is expensive and should not be pushed onto Americans as a major way to reduce carbon dioxide emissions when other energy forms are available that are less expensive.