[Editor’s Note: California wants to be a climate-centric politically correct role model but, in fact, is a poster child for net-zero nonsense that is a non-starter for citizens.]

Californian regulators approved a plan to reduce the state’s carbon-dioxide emissions by 85 percent from 1990 levels by 2045, thereby reaching carbon neutrality, meaning the state will remove as many emissions from the atmosphere as it emits. It aims to do so in part by reducing fossil fuel demand. To achieve the reduction, the state will need to electrify much of its energy consumption by installing millions of heat pumps and deploying technology for carbon capture and sequestration.

The state would build no new gas-fired power plants, increase funding for mass transit, and reduce oil and gas consumption to less than one-tenth of current demand. The plan also would cut emissions by 48 percent by 2030 compared to 1990 levels—up from the previous 40 percent target. While California had previously set this as a carbon neutrality target, Governor Gavin Newsom signed legislation making it a mandate earlier this year.  Elements of the plan include:

The plan includes goals to build 3 million climate-friendly homes by 2030 and 7 million by 2035, deploy 6 million heat pumps by 2030, and develop 20 gigawatts of offshore wind capacity by 2045, as well as strengthening the state’s low-carbon fuel standard in 2023.

This accelerated plan was opened up by major funding—a record $54 billion state climate investment and money to the state from the federal tax and climate measure passed in August (Public Law 117-169).

“Green” critics of the plan blast its over-reliance on carbon-capture technology (CCS), which is one of the most controversial elements of the proposal—slated to begin in 2028. They believe it gives the state’s biggest emitters reason to not do enough to mitigate climate change. Critics also complained about slow permitting processes, reliance on bioenergy, and a structure for a credit market that assigned high value to methane captured from cow manure, therefore promoting factory farming.

Critics representing working Americans had other strong complaints. The transition, especially at the pace envisioned, will cause “staggering losses in the efficiency of the state supply chain,” said Chris Shimoda, senior vice president of the California Trucking Association.  California’s supply chains have already been stressed and businesses are fleeing the state as high energy prices and regulations make it more difficult for them to operate.

Despite the critics of the California plan, the United Nations and the International Energy Agency (IEA) are finally realizing that intermittent wind and solar power cannot do the net zero job alone. The U.N. Intergovernmental Panel on Climate Change (IPCC) states that governments and other entities must employ CCS to remove greenhouse emissions from the atmosphere and store them underground in order to limit global temperature increases. The IEA also found that CCS is “critical” to reducing carbon emissions by 2050, according to a 2021 report. The IEA stated that the technology is important to “net zero” goals as it can help address emissions produced by cement manufacturers and other heavy industries. However, climate activist groups like the Sierra Club believe that CCS is a “false” climate solution that is designed to help the fossil fuel industry, and appear unworried about the economic consequences of expensive and unreliable energy.

California has one of the highest gasoline and diesel prices in the country because of its strict specifications, limited refineries that only produce California’s boutique fuels, high petroleum taxes, and large subsidies for biofuels, resulting in petroleum refineries converting to them. In California, refiners can receive as much as $3.70 per gallon in benefits by switching to producing biofuels from former distillate refineries.

California’s average residential electricity prices in September were $26.66 per kilowatt hour—the fourth highest in the country—and around 70 percent higher than the national average.  Its price is higher because of its transition to renewable energy, its increasing use of expensive storage batteries to back up its intermittent wind and solar technologies, its onerous regulations, and its policies toward net zero.

California has been having problems with its electric grid having enough capacity to get through heat waves due to its policies of limiting natural gas generation, shuttering fossil fuel and nuclear capacity and weather effects decreasing generation from its renewable and hydroelectric technologies. When the state is short on power, it prefers to import electricity from neighboring states, regardless of their generation mix, but has found that those states may not have excess capacity when California needs it most.  California imports more electricity than any other state.

Below are examples of energy bills that Californians are experiencing. 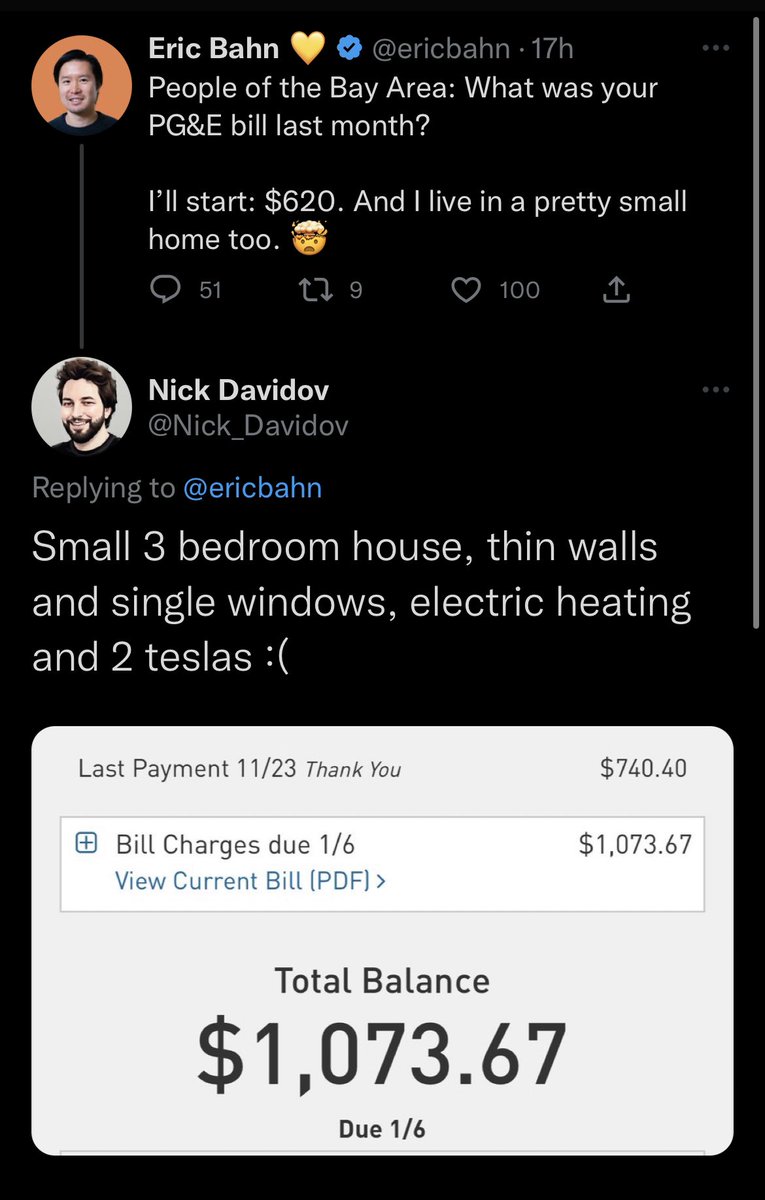 California has a plan to reach net zero by 2045 by reducing carbon dioxide emissions by 85 percent from 1990 levels. The plan will be expensive for the state and its energy consumers as traditional energy will practically be wiped out in favor of intermittent wind and solar power and the expensive back-up storage batteries they require. It pushes consumers toward electric appliances and vehicles when the state has insufficient excess generating capacity to get through its current heat waves.

The state already has one of the highest energy prices in the nation and those will needlessly increase under its plan as it only allows natural gas that is subject to carbon capture and sequestration and it must build out its electric capacity by quadrupling its wind and solar capacity. Californians have already begun exiting the state and this plan will result in more leaving to escape surging energy prices. Americans need to be aware because President Biden’s policies are following in these footsteps.