California issued a flex alert to conserve energy, less than a week after state officials announced a plan to ban the sale of gasoline-powered cars by 2035 and accelerate the transition to electric vehicles. The alert came as a heat wave threatens the state with rolling blackouts due to increased cooling demand and a lack of adequate electricity generation due to multiple closures of baseload power plants. 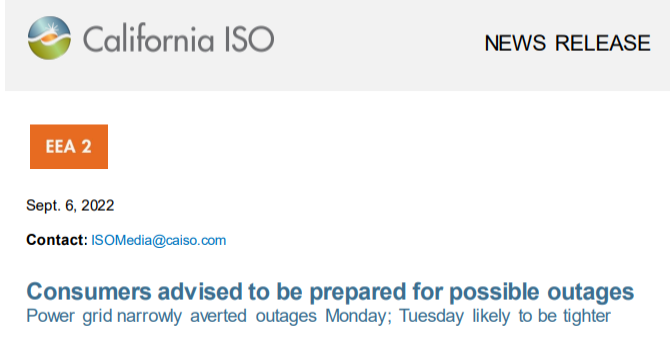 The timing of the first flex alert is a reminder that California’s energy issues cannot be resolved through lofty environmental goals alone.

In May, California energy officials warned the state may be at risk of blackouts for the next three summers due to power supply shortages and extreme weather. That same month, Ana Matosantos, cabinet secretary for Governor Gavin Newsom, declined to share details with the media about what other actions the administration might take to ensure reliability, only saying Newsom was looking a “range of different actions.”

In 2020, Governor Newsom seemed to acknowledge that “Keep It In the Ground-” backed policies and increased reliance on energy imports contributed to the state experiencing its first rolling blackouts in 19 years.

“The situation we are in could have been avoided, there is inadequate power available during the net peak, the hours when the solar [generation] has left the system.”

Going into Summer 2022, CAISO announced the state could be short about 1,700 megawatts this summer – enough to power some 1.3 million homes – in a forecast that didn’t include factors such as extreme regional heat waves.

In the midst of all of this, the California Air Resource Board recently approved a sweeping ban on gasoline cars sales by 2035 that will steadily increase the number of electric vehicles requiring charging capacity, which the Western States Petroleum Association estimates could “increase demand around 300,000 gigawatt-hours statewide,” doubling current electricity demands.

California is one of the largest solar energy producers in the country, but despite promises of new battery capacity, intermittency remains an issue, particularly during the highest-demand hours of the day. As CAISO noted in its flex alert release:

“Today’s Flex Alert is scheduled between 4 p.m. and 9 p.m., when the grid is most stressed from higher demand and less solar energy.”

Indeed, California is breaking records for renewable generation, but they are still reliant on dispatchable resources like natural gas when demand peaks in the evening:

“Energy experts say the falling records are a sign of the remarkable progress that renewable energy has made. But that doesn’t mean fossil fuels were out of the picture.

“Even as the record was broken, natural gas power plants were still running in California.

“Because despite the dramatic growth of renewable energy, turning off natural gas power still isn’t possible in California. The reason is due to a tricky time of day: when the sun sets and solar farms stop producing. California needs to replace that power quickly and seamlessly with other sources, like hydropower and natural gas.” (emphasis added)

Grid operators are warning that blackouts will likely continue through 2025 as energy resources remain in short supply. Those who don’t learn from (recent) history are doomed to repeat it.