California lawmakers kicked off a special legislative session today at the behest of Gov. Gavin Newsom (D) to evaluate “a price-gouging penalty on oil companies that choose to rake in excessive profits at the expense of Californians,” despite allegations of price gouging being thoroughly debunked during a California Energy Commission (CEC) just last week.

The hearing, which was also held at the request of California’s governor, did very little to arm Newsom’s allies in the state legislature with data to support price gouging claims, and instead illustrated why the state’s unique gas market is the reason it is prone to higher-than-average prices.

Several energy experts, including a representative from the CEC itself, provided in-depth explanations for the state’s gas price spikes, demonstrating how decades of policy in the state aimed at limiting domestic oil production and refining are now causing consumers to pay more at the pump.

The Experts: Policy, Not Price-Gouging, Is Boosting Prices at the Pump

During the hearing, a nonpartisan group of energy experts from various backgrounds made the case that structural issues with California’s energy market – rather than alleged uncompetitive behavior by refiners – are driving high prices in the state.

Gordon Schremp, the CEC’s Senior Fuels Specialist, provided expert testimony detailing numerous reasons for high gas prices in California. Among these, two primary factors stood out. First, due to limited refinery capacity and a lack of pipeline infrastructure, California has few alternatives to turn to during refinery maintenance periods:

“When there is a significant unplanned outage, additional supply needs to come from somewhere and the pipelines going to Nevada and Arizona are one way, and neither of those states have refineries. So, there’s no pipeline connecting Texas to California and really there’s limited capacity in the Pacific Northwest for refiners to ship additional volume.”

Second, California’s reliance on imported oil, which is more expensive than domestic crude, is higher and has been steadily increasing compared to other states. Schremp explains:

“California’s sourcing of [crude oil] has been steadily declining since the mid-eighties, and that is anticipated to continue slowly going down. The consequence is the refineries need replacement crude oil, and that replacement is coming from increasingly foreign sources … [Foreign oil is] almost always more expensive than domestic crude oil prices and that will play into one of the factors of why California prices are higher than U.S. averages.” 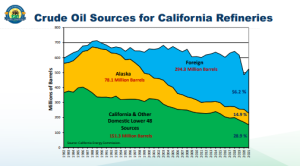 Catherine Reheis-Boyd, President and CEO of Western States Petroleum, testified that California’s energy market is isolated due to decades of restrictions on permitting, high taxes, and strict regulatory standards:

“As pointed out by the CEC staff this morning, California’s market is certainly uniquely expensive. We have a greater tax burden, we have higher environmental program costs, our market is isolated (which makes us vulnerable to higher costs due to lower supply), our refiners face high crude costs due to the need to import as in-state production is artificially limited by government policy, and local and state policy is causing production of fuel to fall faster than consumption.”

Professor Severin Borenstein from the Energy Institute at Haas School of Business, who is frequently cited in the media as an expert on California’s energy market, argued that since 2015, pricing trends in California’s fuel market have dramatically deviated from trends in the rest of the country. Rather than focusing on seasonal and event-driven price spikes, Borenstein argued that policymakers must address consistently high prices:

“I am quite concerned that this hearing is focusing almost exclusively on gas price spikes, rather than the continuing high gasoline price levels which the data show has been a much more significant problem for California drivers since 2015, particularly for disadvantaged households. … This has amounted to over $40 billion in extra costs for California drivers.” (Emphasis added)

These expert testimonies underscore a recent ruling in the Southern District of California, where District Court Judge Jinsook Ohta dismissed price fixing allegations brought against the major refiners operating in California. In her opinion, Ohta stated:

“In California, a small group of refiners control the entirety of gas production in the state. … The California gas market largely depends on this small group of in-state refiners because California is a ‘gasoline island’ isolated from other sources of supply.” (Emphasis added)

Bottom line: Californians pay consistently higher prices at the pump than anywhere else in the nation and will likely continue to do so under Gov. Newsom’s policies. During last week’s CEC hearing, a group of nonpartisan energy experts reinforced that policy, not price gouging, has driven up fuel prices for California consumers, leaving California legislators with little to work with as they kick off a special legislative session called by the Governor to pass a windfall profit tax on oil companies operating in the state. Data presented by experts at the CEC hearing made the case that additional taxes will only drive fuel prices in California even higher.