The Fresno Bee reveals five California power plants, fueled by natural gas, are being constructed to deal with the failure of the state’s green energy strategy.

California has sought to emulate Germany in its energy policy and it’s getting its wish; high energy prices, system failure and inability even to meet its own politically correct objectives. The Golden State green strategy has been every bit the failure as the Energiewende. That failure is revealed in the quiet action of the state to build five new California power plants fueld by natural gas to do what solar and wind cannot do; provide energy when it’s needed on a moment’s notice. Dispatchability cannot be wished away. It is absolutely essential. 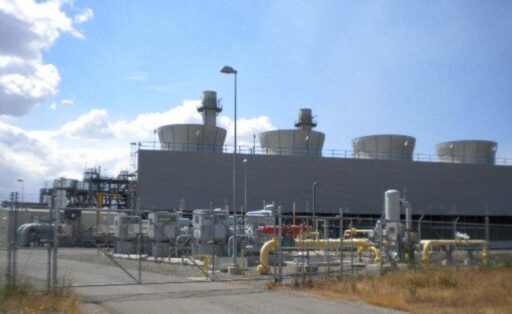 Roseville Energy Park, where a new gas plant will be located

California plans to build five temporary natural gas plants to prevent blackouts and one of those plants will be in Fresno County, according to a local lawmaker.

The Department of Water Resources will install five natural gas plant generators at three powerplants in the state, according to the office of Jim Patterson, R-Fresno.

A total of $171.5 million has already been allocated for the implementation, according to the California Department of Finance.

Patterson confirmed news of the plants during a press conference Friday. His office later told The Bee that one of the generators will be installed at Midway Peaking Plant near Mendota in Fresno County.

His office confirmed plants would also be sited in Yuba City in Sutter County and Roseville in Placer County. Two generators will be at Calpine Greenleaf 1 located near Yuba City, Patterson’s office told The Bee late Friday. Two more will be installed at the Roseville Energy Park located near Roseville.

He said the gas-fueled generating plants will consist of a total capacity of 150 megawatts, with 30 megawatts for each unit.

Bloomberg first reported on the plans on Thursday.

Patterson said his “hunch” is that the state’s use of the plants won’t be temporary, noting that they will be licensed for five years.

Amazing isn’t it? Everything we said about the reality of the Energiewende came true and now everything we said about California has, too. The poetic symmetry of the political patterns is quite remarkable. And, it extends to the denials of the truth as Germany pretends it has had great success even as it becomes Russian bear scat and California power plants fueled by clean dispathable natural gas become an unavoidable necessity:

The Department of Water Resources was in the process of procuring, installing and operating the five 30-megawatt generators at the three powerplants, according to an Aug. 10 letter from the California Department of Finance.

“Based on preliminary reporting, Finance has determined that funding for these critical activities must be secured immediately to allow the Department to secure these additional resources for expedited deployment,” the letter reads. “Accordingly, the Director of Finance is allocating $171.5 million from the Disaster Response-Emergency Operations Account.”

The Department of Finance, in the letter, says it has reviewed the information and agrees with the “estimates and need to make an initial allocation to address these immediate needs.”

It’s unclear whether the $171.5 million is just for the initial allocation or the total amount needed.

The Department of Water Resources will began its work related to the generators within 120 days from Gov. Gavin Newsom’s July 30 “state of emergency to safeguard the state’s energy system this summer,” according to the letter…

“Now we see the order that these natural gas plants are going to pop up — and one of them in my area here in the Fresno area,” [Assembly member Jim] Patterson told reporters.

He said California has been gambling that it can supply the fifth-largest economy in the world with electricity, primarily from wind and solar energy, which are not available at all times.

“It just seems to me that so many of these clueless politicians just don’t understand,” he said. “Now California is being forced to essentially use these sources of natural gas for electrons.”

Lisa Lien-Mager, deputy secretary for communications with the California Natural Resources Agency, provided a statement to The Bee on behalf of the Newsom administration.

“Californians are seeing the impacts of climate change firsthand — record heat, extended drought, deadly wildfires and extreme weather events — all of which are more frequent, more intense, and of longer duration than expected,” she said in the statement. “This summer’s climate change-induced events such as extreme heat, drought and wildfire are beyond traditional models and have led to emergency actions to ensure Californians have the power they need during net peak times when our clean power is not available.”

The extreme heat the state has been experiencing, she said, causes a reduction in the output of power plants, increases the risk of outages and reduces the available imports into the state at peak hours.

“These temporary generators are a contingency to shore up grid reliability in the face of extreme heat challenges this summer across the West,” Lien-Mager said in the statement.

California, she said, remains focused on tackling climate change through “clean energy policy, working towards renewable energy portfolio standard of 60 percent by 2030.” The state also has a benchmark for zero-carbon resources to supply all retail sales of electricity by 2045.

“If anything, the recent emergencies highlight why we are moving urgently toward carbon neutrality and renewable energy,” she said.

The words “critical” and “emergency” and “immediately” all tell the story trust-funder Gavin Newsom can’t utter; that new California power plants fueled by natural gas are now essential because his policies, and those of his incompetent predecessors, have been but appeasement of ideologues, corporatist giveaways and a complete failure. There is no “climate emergency” but there is an energy emergency wrought by the collapse of common sense and the descent of Western Civilization into a corrupt system of oligarchies out to steal whatever they can and wrap their theft in a cloak of political correctness and phony virtue.