[Editor’s Note: Gavin Newsom, the pretty boy trust-funder who runs the California like he is playing a game of Risk, is ruining the Golden State economy and environment.]

Shipping is by far the biggest transport polluter in the world. The fuel used is the cheapest and most polluting fuel available for the world’s 90,000 ships that burn approximately 370 million tons of fuel per year, emitting 20 million tons of sulfur oxides.

The Guardian has reported on research showing that in one year, a single large container ship can emit cancer and asthma-causing pollutants equivalent to that of 50 million vehicles. The low-grade bunker fuel used by the worlds 90,000 cargo ships contains up to 2,000 times the amount of sulfur compared to diesel fuel used in automobiles. 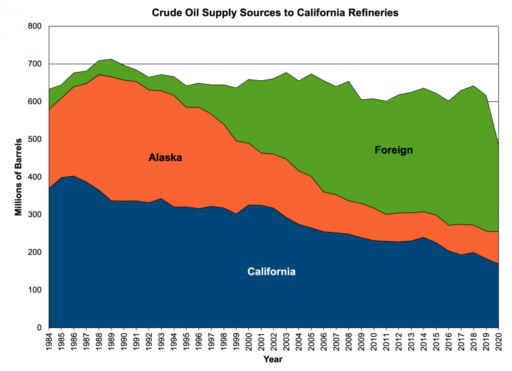 California’s dependency on foreign suppliers for California’s energy needs, as well as the West Coast military operations, has increased imported crude oil from foreign countries from 5 percent in 1992 to 58 percent today of total consumption as noted in the California Energy Commission chart.

Any high school student can easily observe from the California Energy Commission data that California imports of crude oil from foreign countries via large oil tankers were the highest in the state’s history in 2018 at almost 370 million barrels of crude oil for the year.

At 2 million barrels of crude oil per super oil tanker, that’s more than 180 polluting oil tankers per year that Newsom supports unloading at West Coast ports because of his refusal to produce crude oil in-state.

The Governors’ multiple restrictions on in-state oil production leaves California and its economy unnecessarily reliant on foreign governments for the states’ crude oil needs and creates a national security risk for all of America. Increasing dependency on foreign countries to meet the growing crude oil demands of the state while kneecapping abundant California oil production is next-level stupidity of whoever is advising the Governor.

Governor Newsom’s call on the global community to end reliance on crude oil, represents total blindness to the fact that crude oil is the feedstock to refineries for the manufacturing of products that have led to California and all the developed countries to being healthy and wealthy.

Tinkering with the supply chain of crude oil will lead to shortages of thousands of products that support lifestyles and economies and result in inflationary pressures on the limited supply of available products. Efforts to cease the use of crude oil could be the greatest threat to civilization, not climate change

While Newsom sanctimoniously soaks up the glory of taking “action that is unprecedented in both nature and scale” of reducing in-state oil production, he remains oblivious to the data from his own California Energy Commission chart that shows he is just shifting the sources of crude oil from California to offshore.

Rather than producing oil in the most environmentally controlled location in the world, the Governor remains oblivious to the negative impact to the world’s emissions from oil tankers, and the negative impacts to the health of the 8 billion on this planet that result from importing oil via polluting oil tankers

California Governor Newsom represents 40 million residents of his state, but he deserves to provide an immediate explanation to the other 8 billion residents on this earth as to why he refuses to produce crude oil in-state and supports importation of crude oil via oil tankers that pollute annually, the equivalent annual emissions of 50 million vehicles from each of the 180 oil tankers arriving annually at California ports.