Capitalism Is What Really Worries Global Warmists and Fractivists

Capitalism, and revulsion to it, is at the heart of the opposition to oil and gas development by today’s global warmists and fractivists. They’re wrong.

Presumably bolstered by the fiery claims of Greta Thunberg and the general theme of Climate Week, people on Twitter have been declaring that capitalism threatens humanity. This angst rekindled interest in a Guardian article that ran a few months ago, in which author George Monbiot argued that the very nature of capitalism is “incompatible with the survival of life on Earth.” Not only do such claims ignore the obvious progress of humanity staring us in the face—and the environmental activists are supposed to be the empirical ones in this debate—but even if Monbiot’s worries about the climate were correct, capitalism would still be the best social system to deal with the crisis.

Capitalism’s failures arise from two of its defining elements. The first is perpetual growth. Economic growth is the aggregate effect of the quest to accumulate capital and extract profit. Capitalism collapses without growth, yet perpetual growth on a finite planet leads inexorably to environmental calamity.

…The absolute decoupling needed to avert environmental catastrophe (a reduction in material resource use) has never been achieved, and appears impossible while economic growth continues. Green growth is an illusion.

A system based on perpetual growth cannot function without peripheries and externalities. There must always be an extraction zone – from which materials are taken without full payment – and a disposal zone, where costs are dumped in the form of waste and pollution. As the scale of economic activity increases until capitalism affects everything, from the atmosphere to the deep ocean floor, the entire planet becomes a sacrifice zone: we all inhabit the periphery of the profit-making machine.

The second defining element is the bizarre assumption that a person is entitled to as great a share of the world’s natural wealth as their money can buy. This seizure of common goods causes three further dislocations. First, the scramble for exclusive control of non-reproducible assets, which implies either violence or legislative truncations of other people’s rights. Second, the immiseration of other people by an economy based on looting across both space and time. Third, the translation of economic power into political power, as control over essential resources leads to control over the social relations that surround them.

Monbiot’s critique of capitalism is entirely unfounded. In the first place, it defies all empirical grounding, which is ironic because it’s my side of this debate that’s allegedly composed of unscientific “deniers.” Especially as formerly communist countries move towards freer markets, the world has seen dramatic improvements in living standards, while the relevant availability of “depletable” resources has increased; even climate-related deaths have plummeted over time.

But it gets even worse for Monbiot’s thesis. Even if we imagine a scenario—contrary to reality—where humanity did run into a crisis because of natural resource crunch, the best way to deal with the situation would be reliance on private property and market prices. To blame capitalism for the potential problems of a finite world is like blaming thermometers for the flu.

Just the Facts: It’s Getting So Much Better All the Time

In this section I’ll illustrate some of the basic facts, documenting that human welfare has drastically improved during the same period that we have ostensibly seen the ravages of human-induced climate change.

First, consider a chart from Bjørn Lomberg (and reproduced by Marlo Lewis) that shows climate-related deaths from 1920-2017: 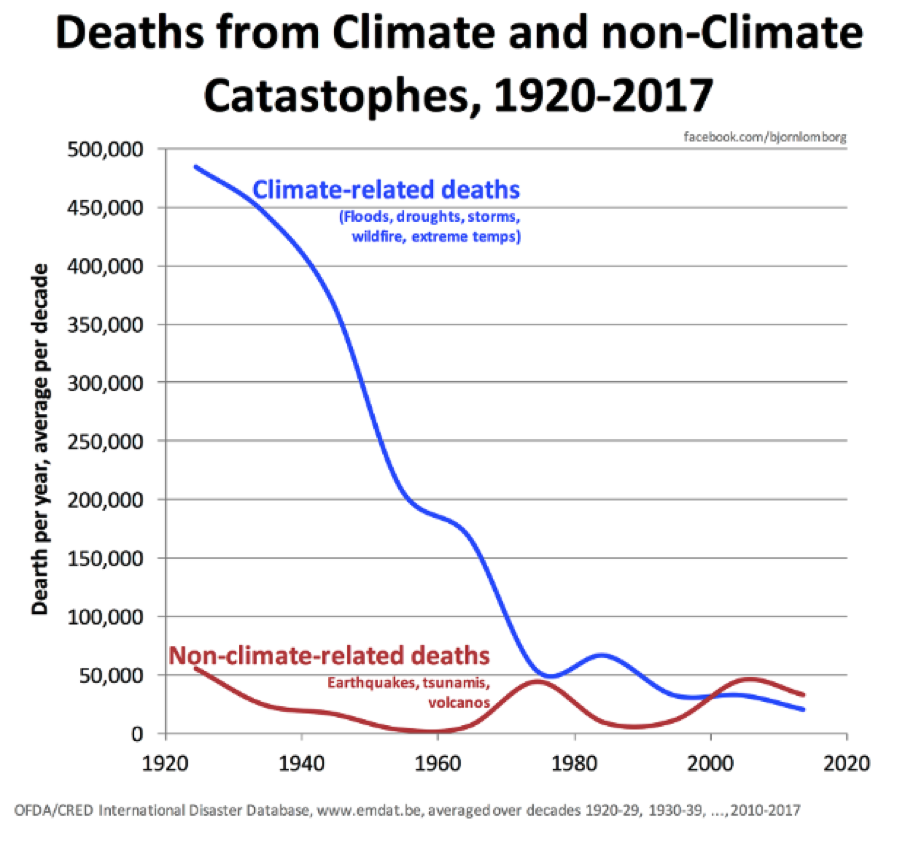 It’s hard to see evidence of impending disaster in the above chart.

Next, because Monbiot is worried about the “finite” planet, let’s look at U.S. “proved reserves” of crude oil, from the Energy Information Administration (EIA):

As the chart shows, U.S. “proved reserves” of crude are at an all-time high at some 39.2 billion barrels (as of 2017), up from 13.6 billion barrels in 1930. The increase in crude reserves has occurred despite the fact that the U.S. has produced an enormous amount of crude oil over this period.

The pattern is similar for world oil reserves and production, but I chose to use U.S. data because it is the most reliable. There’s also a similar pattern for natural gas and coal; as this 2011 IER report shows, North America alone has enough fossil fuels in the broader category of “recoverable resources” to satisfy current consumption rates for literally centuries. And they are growing. According to the Potential Gas Committee’s latest report, U.S. reserves of natural gas increased by the energy equivalent of 100 billion barrels of oil in just the last 2 years.

Now how can this be possible? How can the U.S., for example, have more “proved reserves” of oil now, than it did in (say) 1950? The answer is that it doesn’t make sense for humans to go out and find every last drop of oil (or lump of coal) housed in planet Earth. At any given time, it’s only sensible to have located the precise deposits of a healthy margin of such depletable resources, which is only a small fraction of the physical stockpile.

Yes, since there is a finite amount of crude oil, it must be the case that humanity will eventually have to switch to some other energy source. But humanity—especially in the modern age of relatively capitalistic institutions—has so far had no trouble maintaining consistent increases in total output, notwithstanding the “finite” resources on Earth (or the physical universe, for that matter).

Presumably Monbiot would say that past success is no guarantee of future performance, but as a different Guardian article explains, the UN reports that the world has seen “astonishing” improvements in human welfare just since 1990. Specifically, more than a billion people were lifted out of “extreme poverty,” with “the number of people living on less than $1.25 a day [falling] from 1.9 billion in 1990 to 836 million in 2015.”

What would the data have to look like to vindicate capitalism from the charges of Monbiot?

Even in a Collapsing World, Capitalism Would Be Our Best Defense

As I illustrated in the previous section, Monbiot’s hysterical warnings are utterly divorced from reality. At most, he has to argue that the future will be radically different from the past. In other words, Monbiot must argue, “Capitalism is going to start killing us, starting…NOW.”

Yet even the more dire forecasts in the UN IPCC’s latest summary of the climate science and impact analyses come nowhere close to threatening humanity itself. It’s still the case, even in the worst-case scenarios examined, that per capita global GDP is much higher in (say) the year 2100 than now. In an excellent article for CEI, Marlo Lewis gives the details, along with other lines of evidence to show that climate change, though possibly a serious challenge, is hardly an “existential threat” as Monbiot and several Democratic presidential candidates are matter-of-factly claiming.

But it gets even worse. Even if it were the case that the natural environment were such that humanity really did have to settle for constant (or even declining) living standards, private property and market prices—i.e., capitalism—would still be vital for helping humans organize their activities in the best way.

For example, Harold Hotelling proved way back in 1931 what the equilibrium trajectory of spot oil prices would be, in a hypothetical scenario where we started with a fixed pool and knew what the rate of consumption would be for various possible spot prices. The elegant answer (given certain assumptions) is that the market price of oil would rise according to the interest rate, so that on the margin the owner of the pool would be indifferent between selling one more barrel today, versus holding it off the market to sell next year. (For example, if oil were selling for $100 today and the interest rate were 5%, then the spot price would have to rise to $105 next year. This is because the owner could always sell a barrel today for $100 and then invest in bonds to yield $105 next year.)

I’m guessing that Monbiot would be scandalized by such bean-counting, but this is exactly the kind of outcome we want capitalism to foster. Given that there is a finite quantity of a useful resource like oil, the optimal pattern of usage is that it is gradually drawn down over time, being devoted to ever more important uses as it becomes scarcer and scarcer. The higher spot price of the future ensures that distant generations “register their claim” on the use of the oil, while the positive interest rate in a sense reflects the “impatience” of humans. (If the interest rate were 0% and the population were always growing, we would have the absurd result that no oil would ever be used—it would keep getting passed down the generations, growing in market value but with it never being profitable to actually burn a single barrel.)

George Monbiot alleges that capitalism, left unchecked, will cause the literal extinction of humanity. His arguments ignore all of the evidence of capitalism’s benefits staring us in the face. Yet even on a theoretical level, private property and market prices help organize human activity so that we can deploy our scarce resources in the most efficient manner. Empirically, capitalism has allowed humanity to flourish with an ever-rising standard of living. But even in a catastrophic scenario where we hit a hard resource constraint, capitalism would still be an important tool in our defense, just as we would badly need math and science to help us cope with the emergency.

Editor’s Note: Natural gas reserves have also grown due to capitalism and the innovation it has brought. The shale revolution has also led to dramatic positive impacts in lowering CO2 and a whole host of much more impactful air emissions (e.g., SO2, NOx, PM 2.5). Compare this to pollution found wherever socialism is intrenched. Think former East Germany and China, for example.