CDL drivers are needed in Susquehanna and Wyoming Counties and earn good wages thanks to gas. The Susquehanna County Career and Technology Center is helping train them.

With demand constantly on the rise for those qualified to drive commercial vehicles and heavy equipment, Elk Lake School District/SCCTC superintendent Dr. Ken Cuomo was happy to announce on July 18 that the Susquehanna County Career & Technology Center (SCCTC) would be offering an extensive CDL training program once all permits are secured, hopefully starting this fall. 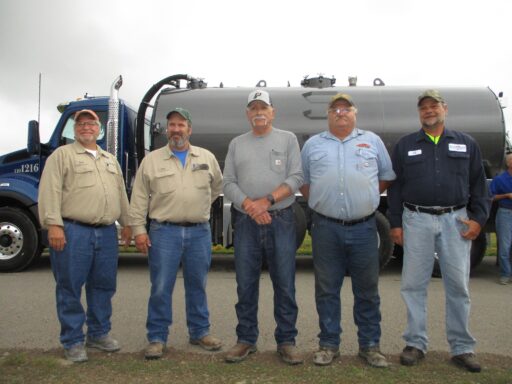 In addition to business leaders and public officials from Susquehanna County on hand to celebrate the achievement, Wyoming County commissioners Tom Henry and Mike Stabinsky were in attendance as was Bill Hampton, owner of Sugar Hollow Water Services of Tunkhannock.

“We are always looking for drivers,” said Hampton. “They are hard to get and hard to keep.” Hampton is especially impressed that the new SCCTC program will include courses specific to the gas and oil fields, including hazardous materials training.

“This is not just a CDL license. Graduates will be able to operate 90,000-pound machinery,” Susquehanna County commissioner Alan Hall remarked. “They will be professional drivers who can go anywhere. And all of the companies offer top notch benefits to their employees.”

Chad Gorman, operations manager for Gas Drilling Operations Services (GDS) admitted that he was primarily concerned about his own company’s immediate need for 100 new drivers when he approached SCCTC executive director Dr. Alice Davis a year and a half ago to see what the school could do to help.

She responded from a regional perspective, painting the larger picture of how providing CDL certification could serve both residents and the greater industrial community. “I was impressed to hear how excited Dr. Davis was to start the program on behalf of all of these businesses,” said Gorman.

“This will impact the whole region and keep the economic prosperity moving forward,” Cuomo concurred, noting that SCCTC already enrolls students from Bradford, Susquehanna, Wyoming and Lackawanna counties in Pennsylvania, as well as from New York’s southern tier.

“It is to be expected that Elk Lake would be the leader in this kind of initiative,” Rep. Tina Pickett said of the school district. She referred to SCCTC’s advisory board, on which she has served for 15 years, as “visionary.” The new program, Pickett related, will propel graduates into the workforce and fulfill the needs of many companies directly and indirectly related to the gas industry.

“It is exceptional for the school to step forward and willingly partner with private businesses to get the program from paper all the way to completion,” Cabot Oil & Gas Corporation external affairs director George Stark agreed. “There’s an advantage to having the school right here in Susquehanna County. We can guarantee local workers can be matched up with local jobs.”

Cuomo explained that the 150-hour course, which includes 42 hours of on-road training prior to a three-hour test, would have been impossible if not for the investments of local businesses such as Cabot, Diaz Companies, GDS, Meshoppen Stone and SGFS. “There is no burden to the tax payers,” Cuomo remarked.

In addition to the aforementioned, SCCTC instructor Gary Fenton and Gene Barr, president of the Pennsylvania Chamber of Business & Industry, were instrumental in bringing the CDL program to fruition.

“This is a positive for Pennsylvania. Our strength is energy at the moment,” Barr told those in attendance. “We have people without jobs. We have jobs without people.”

Wyoming County commissioner Mike Stabinski compared the new courses to apprentice to-worker programs from years gone by. “They’re filling a need by filling a desire,” he commented. “A youth who is interested in driving can move from the classroom to the driver’s seat.”

The curriculum for SCCTC’s new CDL program is set by the U.S. Department of Transportation. Approximately 30 students have already committed to the six-week program, Fenton noted, and another 50 have expressed an interest. With class sizes capped at 12, there are already enough students to fill four classes in the fall.