Industry partners in the new CDL school at SCCCTC put together a job fair for trainees, as it hopes to put them to work sooner rather than later!

With one month of classroom work under their belts, plus time in a driving simulator and a real rig with trailer around a driving course, the first class of CDL trainees at Susquehanna County Career & Technology Center (SCCTC) are learning from major operators in the area about employment options. A mini career fair on July 22 featured four of the original investors in the CDL Training Center, which opened on June 22.

“It provided exposure to them of the different opportunities out there,” said instructor Dale Fisher. “There are a lot of different things you can do with trucking, and they got to see a number of them.” 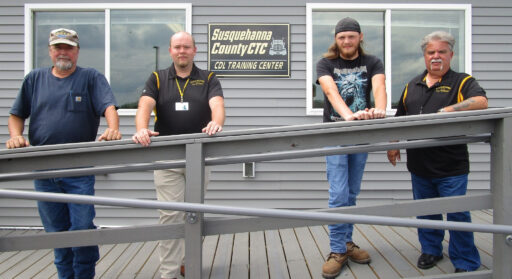 SCCTC CDL Training Center instructors Dale Fisher (second from left) and Brian Eso (right) recently welcomed representatives from the companies who have partnered with the school like Brent Reed of SGFS (left) to speak with students like c (second from right) about the variety of careers available to certified drivers.

Job Fair participant Susquehanna Gas Field Services (SGFS) is a subsidiary of Meshoppen Stone. Combined, the company runs a diverse fleet, including water and dump trucks and lowboys, which appealed to a number of the job fair attendees.

SGFS representative Brent Reed said the future drivers were also interested in the variety of schedules the company offers, from local work that gets them home every night to hauling stones to all 48 states. It is not uncommon, Reed noted, for young drivers to start local and later switch to long-hauls and for older truckers to convert back to local routes.

Harris Paving of Tunkhannock excels in driveway installations, asphalt repairs and parking lot construction. In addition to a fleet of tri-axles, Harris operates a lot of heavy equipment, which caught the attention of students like Julian Kupst of New Milford. His primary goal is to drive straight trucks, but he was intrigued by the idea of working with a company like Harris during warmer weather and possibly plowing snow in the winter.

Also in attendance were representatives from Holcombe Energy Resources, which has foot prints in both Pennsylvania’s Marcellus shale and Ohio’s Utica shale, and its subsidiary, Eastern Freight Systems, which hauls cargo up and down the east coast.

The speakers were impressed as well with what the CDL Training Center has to offer, like the simulator and a van trailer for practicing. Reed and instructor Brian Eso agreed that the box presents more of a challenge than a flat bed to students for learning to back up and take corners.

The commitment of the students and the questions they asked made a big impression on Reed. “I definitely saw potential in a lot of them, and we’re willing to work with an inexperienced driver,” he stated.

SCTTC executive director Dr. Alice Davis said, “We are glad to be able to offer the Job Fair for our CDL Program students. We not only emphasize great training opportunities but also, upon successful completion of the program, job placement opportunities.”

For more information about the CDL school at SCCTC, including scheduling and the application process, interested readers may log on to www.scctc-school.org or call 570-278-9229.