CEPP Will Cost Utilities $16 Billion and Accomplish Nothing

…
[Editor’s Note: The Clean Energy Performance Program or CEPP is yet another green energy hustle and will contribute little or nothing in the way of clean energy; just a con.]

The Clean Energy Performance Program, or CEPP, would provide subsidy payments to electric utilities that increase their share of electricity generated from “clean” sources, mainly wind and solar power, by at least 4 percentage points per year from 2023 to 2030. Utilities that fall short of that target would pay a penalty. The program as defined by House Democrats is expected to cost taxpayers about $150 billion and result in an electric grid that would be 80 percent carbon free by 2030. As the chart below shows, utilities are making progress on carbon-free energy, but the CEPP would induce them to transition faster. 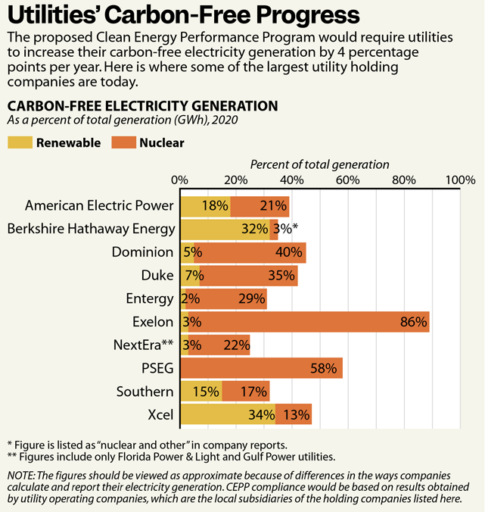 There are numerous problems with the CEPP but one of the greatest is that the incentive will drive utilities to add renewable energy too quickly, which can destabilize the grid. We have seen the results of grid destabilization in the rolling blackouts in California last summer and the blackouts in Texas this past winter.

These are not the only examples, however. Europe is moving to carbon free energy so quickly, that some countries have suffered from blackouts and energy prices are currently skyrocketing as the continent does not have enough fuel and back-up power to get them through the winter. Natural gas stocks in Europe are below the level they should be this time of year, Russia is tightening its supply of natural gas to the continent so that Nord Stream 2 would be approved allowing Russia to wreak more havoc on the European energy system, and China—along with other Asian countries—is out-competing Europe for LNG deliveries.

Another issue is that the United States is dependent on China for solar panels and materials needed to manufacture wind turbines. China has been working for decades to be the principal supplier of rare earth minerals and other critical metals needed for “clean” energy development. A rush to develop these technologies could leave utilities short of the materials needed, similar to the shortage of semi-conductors that we face today that is disrupting automobile manufacturing.

Decades ago, a “renewable energy performance standard,” as twenty some states have imposed, was debated at the national level. Because wind and solar resources are not uniform throughout the country, with some states having better access than others, it was never enacted. That is because the states and companies that have the benefit of strong wind and sun resources can develop renewable energy projects at lower costs than places with less wind or sun.

Despite that, ten states (California, Hawaii, Illinois, Massachusetts, New Mexico, New York, Oregon, Rhode Island, Virginia and Washington) have laws calling for a transition to 100 percent renewable or carbon-free electricity. Generally, utilities in states with those laws have more experience in making large investments in renewable energy. Utilities that have experience owning and developing renewable energy projects and have strong relationships with independent developers of renewable energy can respond more quickly and obtain more of the subsidies the bill offers, which are funded by taxpayers.

Generally, utilities are favorable towards building new capacity because they obtain profits for “return on capital” investments for the new generation capacity. For regulated utilities, new energy capacity – even if it replaces working generation capacity – is rewarded with a guaranteed return on that capital.   This is generally why utilities do not object to being compelled to invest in new energy sources, regardless of the reason. Ratepayers reward them for building new things by paying more for it.

The CEPP will award $150 for each additional megawatt-hour after the first 1.5 percent of increased sales. If a utility fails to increase its percentage of clean electricity sales by 4 percentage points when compared to the previous year, it must submit a payment of $40 per megawatt-hour for the gap between its actual sales and the 4-percentage point increase with the option to defer grants or payments of up to two consecutive years to allow for the intermittency of renewable production.

In recent years, there has been little change in electricity consumption from year to year, partly due to increased adoption of energy efficient appliances and improvements in building materials. The following example from the American Action Forum assumes total electricity sales for a hypothetical utility remain the same over the course of the 3 years of the example. (Note the term “clean electricity” is that which meets the political and legal description in the CEPP.)

Assume a utility sold 500,000 megawatt-hours of which 12 percent was clean electricity in its reference year and it increases the percentage of clean electricity in the first year by 4 percentage points. It would receive a $1.875 million taxpayer subsidy. In the following year, if the utility did not increase its sale of clean electricity by 4 percentage points due to a bad wind and solar resource year and just had 12 percent of its 500,000 megawatt-hour sales as “clean,” it would be responsible for submitting a payment of $1,600,000. The following year it could again add enough clean energy to make the 4 percentage point threshold to earn a subsidy, garnering another $1.875 million payment. The net to the utility after 3 years would be $2.15 million, paid by taxpayers. 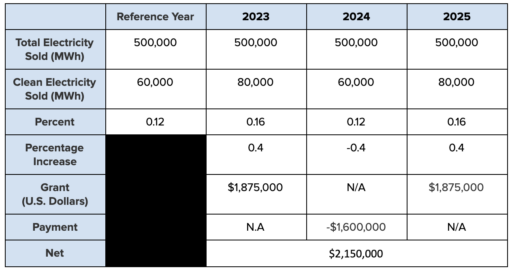 In 2019, carbon-free electricity (nuclear, hydroelectric, geothermal, wind, and solar power) composed about 36 percent of the power consumed in the United States (with most comprised of nuclear and hydroelectric power). When the percentage of clean electricity consumption is increased to 40 percent, in keeping with the minimum 4 percentage point increase to qualify for the subsidy, an additional 170 million megawatt-hours of clean power would need to be sold. The first 1.5 percent increase is excluded for the purpose of calculating the subsidy. The remaining 2.5 percent results in a subsidy of $16 billion nationwide when total electricity sales remain constant. If, on the other hand, all utilities failed to meet the CEPP’s 4-percentage point increase, they would be responsible for a $6.8 billion payment to the Department of Energy.

The upshot is that utilities are making progress on carbon-free energy, but the CEPP would strongly encourage them to make the transition faster. However, the methodology of the CEPP is flawed as the American Action Forum has pointed out. The CEPP could result in payments of as much as $16 billion annually to utilities and not secure additional clean electricity generation.

The free market is the best way to accomplish such transitions as has been done in the past with the industrial revolution, the horse to auto market change, and other transitions that the United States has undertaken to better the living conditions of its people.

If the transition to carbon free energy was in the best interest of the world, developers and inventors would find the technologies to do so. The rush that the Biden Administration and the House Democrats has put on the transition is suicide to a reliable and affordable generation system. Such policies could rapidly put the United States into a situation similar to that now seen in Europe, which has already deployed similar systems and goals on its energy system.