The Chester County, PA District Attorney, Democrat Deb Ryan, has pressured and bullied Energy Transfer (ET) and its Sunoco Pipeline subsidiary into signing a “consent decree” that guarantees if ET spills one cup of drilling mud or creates any kind of “public nuisance” in finishing up work on the Mariner East pipeline, the DA gets to haul the company into county court and charge it with a crime. The consent decree means in addition to the state Dept. of Environmental Protection (DEP) breathing down their necks, ET now gets a second master (AG Ryan) breathing down their necks too. Joy.

ET signed the consent decree, a document which makes a lot of wild allegations, under duress (in our humble opinion). In signing the decree, ET specifically does NOT admit to any wrongdoing Ryan claims in the document. ET will pay no new fines and flat-out states any kind of “nuisances” mentioned in the document were long ago resolved.

We’re not exactly sure what this document accomplishes, other than being a PR stunt by DA Ryan. The decree forces ET to file a report every six months with the DA’s office (yeah! more paperwork). The DA’s office claims the decree does not shut down the pipelines (ME1, ME2, and ME2X) running through the county, and it does not stop any existing or planned construction. However, we think that’s disingenuous. We think Ryan plans to use the decree the second a new violation is alleged (and you know there will be another alleged violation at some point), so she can shut down construction and possibly prevent the pipeline(s) from operating in Chester County.

The best reporter working for a mainstream publication we know of is Andrew Maykuth at the Philadelphia Inquirer. Maykuth breaks down the latest news in an unbiased fashion and makes it understandable:

The Chester County district attorney and Sunoco Pipeline LP have reached a civil settlement that requires Sunoco to make no more mistakes in laying the Mariner East pipeline — such as the discharge of mud — or risk punishment in Chester County court.

Sunoco Pipeline, which is owned by Energy Transfer LP, signed a consent decree that establishes Chester County oversight of future environmental violations, Deborah Ryan, the district attorney, announced. The consent decree requires Sunoco to abide by all laws and permits and not create public nuisances under the Pennsylvania Clean Streams Law.

Though Sunoco voluntarily signed the agreement, the company admitted no wrongdoing, paid no fines, and said the “nuisance” issues cited by the district had been resolved long ago.

The consent decree is the outcome of threats made in 2019 by Ryan’s predecessor, Thomas P. Hogan. He said he would file a civil nuisance action against Energy Transfer unless the company corrected such problems as “inadvertent returns” of drilling mud during the pipeline’s construction.

Seth Weber, a former federal prosecutor hired as special Chester County prosecutor in 2019 to look into Sunoco’s troubled construction of the cross-state project, praised the decree. He said it would give the county an additional tool to press the firm. 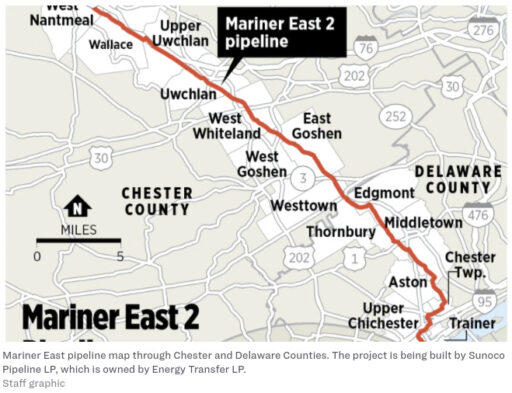 “We’re asking for a change in their conduct and if they violate their permits or the environmental laws, that they would be held accountable in a court of law,” Weber said. About 23 miles of the Mariner East system cross Chester County, but it is among the most densely populated parts of the 350-mile system.

The county did not seek money damages from Sunoco, which has already paid the state about $16 million in penalties for the $5.1 billion project. Though some pipelines have been carrying natural gas liquids since 2014, completion of the project is four years behind schedule. The pipelines are to end at an export terminal in Marcus Hook.

“This lawsuit does not seek to stop the pipeline or suspend the pipeline,” Weber said. “It just seeks to hold the parties accountable for their actions in the installation, drilling and other activities in connection with the pipeline. They have now agreed to be subjected to the jurisdiction of the Chester County court if they violate it.”

The complaint cited a rash of problems Sunoco has experienced in Chester County with construction of the three Mariner East pipelines, including the most recent incident, a discharge of drilling fluids last August upstream from Marsh Creek Lake in Upper Uwchlan Township. State regulators forced Sunoco to halt construction at that location, and the company this month filed plans to modify its construction method near Marsh Creek to avoid additional incidents.

A Sunoco spokeswoman on Thursday said it cooperated with the DA’s investigation, but called the allegations “historical events” that were previously addressed by the Pennsylvania Department of Environmental Protection.

“Defendants specifically deny all factual allegations and legal conclusions contained in this consent decree, and further deny liability for any claims that the Chester County District Attorney’s Office may have against defendants in connection with the Mariner East pipeline system,” the 19-page pact says.

The agreement requires Sunoco to hire an independent auditor who will file a report every six months with the district attorney, outlining the company’s performance. The report will be confidential because it may contain privileged information about the project, but the district attorney can use the information to bring any actions against Sunoco for noncompliance.

Editor’s Note: A reader who has been following this saga from afar offers the following additional commentary:

This case has nothing to do with a legally permitted pipeline project that has withstood nearly every legal challenge and instead everything to do with a politician exploiting this project for personal political gain. This isn’t even about public safety or the environment as much as it’s about deflecting media attention on what the real story is. What the Chester County District Attorney’s Office failed to boast about is the fact that her office signed off on a consent decree with the pipeline builder with no fines or penalties, essentially validating the years of intense regulatory and public scrutiny that went into this project.