China Making Itself An Energy Superpower As Biden Cowers

…
[Editor’s Note: Joe Biden’s is indebted to cowers before China, putting China First, just as China is, while Biden sets America up as the stooge to fund green eggs and scam.]

It does not matter whether it is oil, natural gas, coal or nuclear, China is developing it. Despite the country’s stated intention to peak carbon dioxide emissions in 2030 and to be carbon neutral by 2060, China’s actions are not in compliance. China is still planning to build over 100 gigawatts of new coal capacity that operate efficiently for 40 to 60 years. It supports its economy by consuming large amounts of coal, which represents 57 percent of its energy supply. It is developing a new shale oil field in northeast China and shale gas fields. 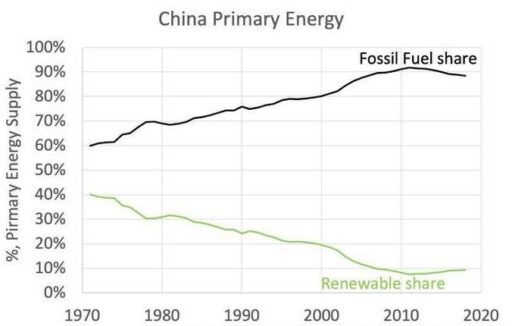 China National Petroleum Co. (CNPC) is planning for new shale oil production from formations within its existing Daqing oil field. CNPC plans to produce 1 million metric tons of oil annually by 2025 from the Gulong shale oil formations at Daqing in northeast China’s Heilongjiang province. CNPC drilled several key exploration wells in the Gulong formation including the Guyeyouping 1, Yingye 1H and Guye 2HC, all of which have yielded high volumes of oil in test production.

As China’s biggest oil field, Daqing supplied oil for the past 60 years, but with depleting reserves, CNPC is turning to shale formations near the field to continue its oil production. CNPC will use horizontal drilling and hydraulic fracturing pioneered in the United States to obtain the oil. The company plans to drill 100 wells into the Gulong this year, having completed 58 so far with 17 of those producing industrial volumes. The company has identified oil bearing zones of 1,413 square kilometers (546 square miles) in the Gulong formation so far this year that added 1.268 billion metric tons of geological reserves (over 9 billion barrels). China is pursuing shale oil despite challenging geology and large development costs.

To process its domestic oil and its oil imports, China has been building refineries. According to the International Energy Agency, China is expected to dethrone the United States as the number one petroleum product producer in 2021, a historical first. About 50 years ago, the United States had 35 times the refining capacity of China. But today, oil exporters are selling more crude to a growing Asia and less to customers in North America and Europe.

China’s refiners are becoming a growing force in international markets for gasoline, diesel, and other fuels, putting other refiners out of business. Chinese refining capacity has nearly tripled since 2000 as it worked to keep pace with the rapid growth of diesel and gasoline consumption. The country’s crude processing capacity is expected to climb to 20 million barrels per day by 2025 from 17.5 million barrels per day at the end of 2020.

China’s provinces are planning to construct over 100 gigawatts of new coal-fired generating capacity despite a decline in approvals in the first half of 2021. Local planning agencies approved 24 new coal-fired power plants with a total capacity of 5.2 gigawatts in the first six months of 2021–down about 80 percent from a year earlier when new projects surged to help China’s recovery from coronavirus lockdowns. The planned capacity on China’s provincial project lists total 104.8 gigawatts, which is enough new capacity to power the entire United Kingdom. The 104.8 gigawatt figure includes plants that have been approved and are in construction as well as those still at the planning stage. The provinces with the most planned projects are Shaanxi, Guangdong, Gansu and Guizhou.

China is the world’s biggest energy consumer and emitter of greenhouse gases. But, China does not plan to start cutting coal consumption until 2026. Until then, the central government has pledged to “control” the number of new coal projects going into operation. But ‘control’ does not mean not approving new coal power plants.

China generated 53 percent of the world’s total coal-fired power in 2020, nine percentage points more than five years earlier, despite its pledges to the Paris climate accord and the building of hundreds of renewable energy plants. China’s coal-fired generation increased by 1.7 percent (77 terawatt-hours) last year, increasing global coal power to 53 percent from 44 percent in 2015.

China is not just building coal plants in China, but also in other countries. China invested over $50 billion in building new coal plants overseas in recent years, subsidizing investment in coal plants across 27 countries. It is purportedly building, planning or financing more than 300 coal plants in Turkey, Egypt, Vietnam, Indonesia, Bangladesh, and the Philippines. Over a quarter of new coal plants outside China have some commitment or offer of funds from Chinese financial institutions. Most of China’s plants (80 percent) have pollution control equipment that remove sulfur dioxide, nitrogen oxides and particulates, but the coal plants China is building in Africa and most likely elsewhere do not. U.S. special climate envoy John Kerry is planning a trip to China where he is to ask Chinese leaders to declare a moratorium on financing international coal-fired projects. However, China sees development of low cost power generation in developing countries as part of its expansion of economic and security interests in such areas.

China is building 452 million metric tons of new annual coal production capacity and has another 157 million metric tons in planning for a total of 609 million metric tons. That means China’s planned new mine capacity will be 26 percent higher than all the coal that the United States produced in 2020. China already produces almost 50 percent of the world’s coal and 53 percent of the world’s coal-fired electricity—nine percentage points more than five years earlier. According to the report by Global Energy Monitor, four Chinese provinces and regions—Inner Mongolia, Xinjiang, Shaanxi and Shanxi—account for nearly a quarter of all the proposed new coal mine capacity in the country.

Most of the new nuclear global energy construction is in China, which is on pace to be the biggest developer of nuclear power in the world. During China’s 13th Five-Year Plan period from 2016 to 2020, China built 20 new nuclear power plants with a total capacity of 23.4 gigawatts, doubling the country’s total capacity to 47 gigawatts. That expansion is expected to occur again during the country’s next 5-year plan, which has a new target of 70 gigawatts of nuclear capacity before 2025. According to Luo Qi of China’s Atomic Energy Research Initiative, “By 2035, nuclear plants in operation should reach around 180 gigawatts” which will be more nuclear capacity than in the United States and France combined.

China National Nuclear Corporation (CNNC) began construction of the first onshore small nuclear reactor in the world to gain a leading position in the modular reactors market. Construction began on the demonstration project at the Changjiang Nuclear Power Plant in the Hainan province in southern China. The modular small reactor technology demonstration project will have a power generation capacity of 125 megawatts.

China’s economy is based on fossil fuels (hydrocarbons), which generate 86 percent of its primary energy consumption and China’s investments in these sources continues to grow. China is adding new coal-fired capacity–plants that can continue operating efficiently for 40 to 60 years—and is developing new coal mines. It is also constructing nuclear power plants, with an expected nuclear fleet by 2035 that will be larger than that of the United States and France combined. China is also developing its shale oil and natural gas sector using hydraulic fracturing and horizontal drilling technologies and is constructing new refineries that allows China to surpass the United States as the largest petroleum producer in the world, which is expected this year. China also leads the world in solar and wind generation and is by far the largest producer of hydropower.

While China is continuing to build its traditional energy sector to support its economy, President Biden is planning billions of dollars to support renewable energy exclusively. Biden is doing all he can to hurt coal, oil and natural gas in the United States with his moratoriums on oil and gas drilling on federal lands and waters, his cancelation of the Keystone XL pipeline, his moratorium on leasing in the Arctic Natural Wildlife Refuge, and his threats to remove tax deductions for the oil and gas industry. China is practicing an “all of the above” strategic energy policy. The United States seems on a path to an “all of the above, but nothing from below” strategy, stranding enormous amounts of energy and ushering in a low energy future.

Editor’s Note: While China moves ahead with its China First energy policy, Joe Biden, our White House occupant has adopted a solar agenda that is guaranteed to make America last, as another recent IER article demonstrates in spades:

According to the Department of Energy’s Solar Futures Study, by 2035 solar energy has the “potential to power 40 percent of the nation’s electricity,” and 45 percent by 2050. The remainder of a carbon-free electricity grid in 2050 would be supplied by wind (36 percent), nuclear power (11 percent to 13 percent), hydroelectricity (5 percent to 6 percent) and biopower and geothermal (1 percent)…

The United States relies almost entirely on Chinese manufacturers for low-cost solar modules, many of which are imported from Chinese-owned factories in Vietnam, Malaysia and Thailand. China also supplies many of the key components in solar panels, including more than 80 percent of the world’s polysilicon. Nearly half of the global supply of polysilicon comes from Xinjiang; 35 percent from other regions in China. In 2019, less than 5 percent of the world’s polysilicon came from U.S.-owned companies…

Further, China controls over 80 percent of the critical minerals used to create batteries. The Democratic Republic of the Congo where China owns eight of the 14 largest cobalt mines accounting for about half of the country’s output, produces 70 percent of the cobalt needed using slave and child labor…

A rush to add renewable power has weakened the reliability of the electric grid as demonstrated by California and Texas when their grids could not handle weather related issues. Rather than investing in reliability, utilities in states with renewable portfolio standards have been forced into investing in renewable energy and retiring fully operable and reliable dispatchable units. Blackouts and rolling blackouts have occurred because of insufficient operable capacity. Many home owners in these states have turned to purchasing gasoline or diesel generators so that they have standby power if future failures to the electric grid should occur. These units emit carbon dioxide emissions, so Biden’s decarbonized electric sector goes out the window. Further, low-income consumers cannot afford generators or backup battery systems, which can cost $10,000 or more.

So, Joe Biden’s controllers are leading us into a wilderness where we have use fossil fuels to make our own energy, while China is making itself into an energy superpower on whom we’ll be dependent for supplies. We are governed by the dumbest, most vile and scheming money-grubbing rulers imaginable.