Civil Society Is All But Totally Corrupted by Our Ruling Class

Our civil society, the crown jewel of Western Civilization, has been all but totally, and perhaps irrecoverably, corrupted by our ruling class, unless we reclaim it.

Free speech is all but gone. The Big Tech oligarchy has designated itself as the thought police. The Church has put worldly warming ahead of the heavenly. Universities have been transformed from centers of debate and learning to re-education camps designed to undermine every feature of the Western civilization they once taught. Major media have conglomerated to become the propaganda arm of one political party. The military has adopted surrender as the best defense.

Corporations prefer government rent over earned profits. Government is run for the benefit of the few. The world of finance has become the world of power to control everything via ESG. Non-profit charities operate as tax-exempt political entities. Disease has become the excuse to steal freedom and votes. The ruling class seeks to replace the electorate, having had enough of us. Western Civilization is all but dead without an illusive uprising of the ordinary man to restore civili society. 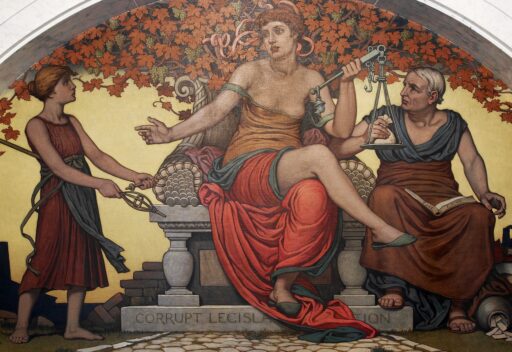 No, this isn’t about natural gas specifically. Yet, it is because natural gas has been attacked, in the name of a contrived climate crisis that bears no relationship to reality, in pursuit of trillions in government rent that will ultimately go in the pockets of a few. Every natural gas company and every other company of any significance, in fact, is being bullied into ESG nonsense designed to create the circumstances that will allow the government rent and power to flow to the unelected. It is endemic corruption that emanates from the ruling class of Davos, D.C. and the dons of Wall Street, and which is destroying civil society.

These are the same people who want no borders and believe world leadership should gravitate to themselves and be shared with China, although China has other ideas to be sure or they wouldn’t be investing in our universities, our basketball teams and our politicians. The current ruling class of Western Civilization wants to live off it for a while as they create a world without nations and electorates that get in the way. If it takes a socialist form, so be it: every socialist enterprise is run elites and this group of elites is ready and willing. That’s what is behind so much that is wrong at this instant. Moreover, it’s no coincidence it’s happening. Civil society has been broken, not by accident but by intention.

We hear it’s about science, experts and them when it comes to issues they’ve ginned up, as in global warming. But, real science doesn’t demand an end to investigation and research or force others toward its view as is happening with global warming or the ludicrous non-scientific political approach to the Wu-Flu. As for experts, how many times do we have to learn the lessons of McNamara’s wiz kids who got us into Vietnam, Bush’s experts who tried to reinvent the ways of other civilizations or Obama’s experts who created a health care system raising the price of it and lowering the quality for everyone? Experts are never wise beyond their very narrow area of expertise. Worse, they are nearly always infected with the fatal conceit that supposes talent in one thing makes one a genius in all things. Only a fool, though, supposes his fate is better protected by a jury of one than a diverse group of peers.

Our current ruling class imagines otherwise. They are, generally speaking, spoiled children of wealth who are seldom affected in the slightest manner by the policies and programs they increasingly impose on the rest of our civili society. They are arrogant and dismissive. Their poster children include people such as Chris Wray, he of the perpetual condescending sneer who serves as our FBI Director. Educated at the Buckley School in New York City, the Phillips Academy boarding school and Yale University, he is a quintessential member of the elite. Like another Buckley School alum he knows his role is to serve his kind first and foremost and to keep the riff-raff away. Other examples include Pennsylvania Governor who is determined to impose RGGI on the Commonwealth for no other reason than to gain the plaudits of his own prep school buddies. And, then, there are those Dalton School educated DAPL protesters and hundreds more like them.

So, these members of the ruling class are methodically destroying what little remains of of our civil society. Just what do we do about it? It may well be too late and no thinking person should deny this possibility. It’s gotten that bad. If there is an answer, it involves two elements; truth-telling being one of them. Every person of good will and common sense must rise up and shout the truth. That’s what I’m doing here. I’m saying Western Civilization is in its death throes unless we counter it with simple truths. The fact it’s simple, makes that much harder, of course, but we must counter the lies or lose everything. We cannot afford to think we are only involved in just another political dispute; we are far, far beyond that. Virtually everything is corrupted and it must be called out without fear of consequences.

We must also pray. Our problems are too big for human solutions. Our arrogance, in fact, stems from our attempt to substitute man for God. That is, ultimately, the foundation of the fatal conceit. Humility, combined with prayer, is the first step toward restoring any semblance of Western Civilization and the freedom upon which it is constructed. I can think of no greater way to do so than to recall the words of America the Beautiful; “God mend thy every flaw, May God thy gold refine, God shed his grace on thee.” Accordingly, let me end this Labor Day rant with the most beautiful rendition ever of this prayer in song.