[Editor’s Note: “Vested interests have had their say, and public relations have taken precedence over engineering and economics” but CLCPA “winging it” cannot and will not work.]

At the September 13, 2021 meeting of New York’s Climate Leadership and Community Protection Act (CLCPA) Climate Action Council a requirement to consider carbon reduction measures in other jurisdictions was discussed.  I agree that this is an important consideration and recently wrote that the European experience reflects not only high energy costs but there are troubling signs that reliability issues can occur even during periods when the electric system is not stressed due to high demand.  This post calls reader’s attention to Minister of Parliament Steve Baker’s recent article on the United Kingdom’s similar plans to reach net zero emissions.

Steve Baker is a Conservative MP and former Brexit Minister. He is a trustee of the Global Warming Policy Foundation (GWPF).  I wanted to include a description of the GWPF in this section but recent changes have made that difficult.  If you do an internet search for the GWPF, you will get a string of results all branding them as the “United Kingdom’s most high profile climate denier group” but won’t be able to find their own link without searching.   If you get to gwpf.com then you are redirected to Net Zero Watch.  GWPF has set up Net Zero Watch to “provide serious analysis of naïve and un-costed decarbonisation policies.”  They plan to “highlight the serious economic, societal and geopolitical impacts of poorly-considered policies, both domestically and internationally”.

Net Zero Watch has been setup to “highlight and discuss the serious implications of expensive and poorly considered climate change policies”.  A recent energy crisis in Europe foreshadows New York’s future under the CLCPA:

With our domestic shale gas resources sitting untapped under an absurd government ban, gas prices are going through the roof. Net Zero Watch will challenge the wild claims of green activists and policy advisers about this venerable and benign technology, which has brought US gas prices down to a small fraction of those here.  As this year’s weather has shown, our decision to phase out fossil fuels and nuclear power and to rely more and more on wind farms for our electricity supply has had dangerous consequences. We will campaign to put affordability and security of supply back at the centre of the energy debate, and we will expose the risky wishful thinking behind many claims about energy storage.

Baker’s description of the United Kingdom net-zero plan is entirely consistent with my impression of the CLCPA.  The following section quotes Steve Baker’s commentary in italics with my indented and unitalicized comments.  I don’t have many comments because one only has to substitute New York for UK and Albany for Westminster for the most part. 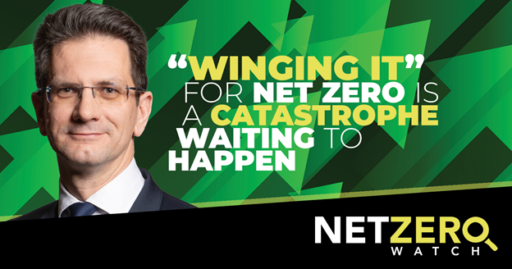 “Winging It” is a Catastrophe Waiting to Happen

“Winging It” is a Catastrophe Waiting to Happen

The UK’s plans to decarbonise the economy are a classic example of the ancient political strategy of “winging it”. Hard though it is to credit that idea, it’s true; the “experts” in Westminster have been basing your future and mine on a plan that relies, to a very great extent, on a collective crossing of the fingers.

The CLCPA experts in Albany rely on bureaucrats at the state agencies that have to tailor their results to meet the political agendas of their appointed directors to sustain their careers.

Governments of one shade or another, Whitehall bureaucrats, and their advisers in the Climate Change Committee have been working on such plans for well over a decade now, and it’s fair to say that they still have little or no idea how Net Zero can be achieved, beyond a vague idea that we should electrify everything and have lots of energy from windfarms.

The description of the scenarios to meet the CLCPA targets at the October 1, 2021 meeting of the Climate Action Council is entirely consistent with this description.

That’s no more than a starting point, of course. There are enormous practical difficulties (and eye-watering costs) to be dealt with, but such nitty-gritty issues seem of little interest to the experts in Westminster. “Things will become cheaper…” they say “….we’ll invent something”.

Expert handwaving of this kind has been enough to convince the media and most politicians, but as the legendary physicist Richard Feynman once pointed out, Nature cannot be fooled, and it looks very much as Nature is going to lay her cards on the table this winter.

One of the key problems is that we don’t have any way to store electricity on a large scale for when the wind isn’t blowing. That can be a few weeks in a normal year, or months in a bad one. The problem has always been there, and we have had no firm answer from the “experts”. We don’t have enough suitable sites for pumped hydro; batteries and hydrogen are far too expensive. As was pointed out in a letter to one of the national newspapers last week, enough batteries to see us through a wind lull lasting just ten days would cost £150,000 per household at current prices.

The Climate Change Committee says that we can get electricity through interconnectors from other countries when the wind doesn’t blow here. This is something of a “magic solution” for them, because they can simply claim that we’ll build as much interconnector capacity as we need. However, it again ignores the practical difficulties, such as the fact that if the wind isn’t blowing here, it probably isn’t blowing in most of western Europe either, so assuming (as the “experts” in Westminster do) that everyone follows us down the decarbonisation path, we are all going to get in a bidding war for the few megawatts of power that are left. There is also a national security problem with interconnectors, as was recently brought sharply into focus by French threats to cut the UK off if we didn’t play ball over fishing rights.

To this point, the CLCPA scenarios avoid the use of imported power and, for the most part, we don’t have to worry about international security issues.  Note, however, that a key component for New York City is a transmission interconnection for hydropower  from Quebec.

New York’s plans include CCS for concrete manufacturing but so far have downplayed its use for power generation.  All of the concerns listed are relevant and don’t note that a suitable location for sequestration is needed.  Incredibly there are members of the Climate Action Council that want to prohibit all forms of combustion which would preclude the use of CCS altogether.

The other problem with planning for gas and CCS to deliver us from the perils of intermittency is that it appears unlikely we are going to have any cheap gas to feed them with – successive governments, egged on by the CCC, the renewables industry, and the green movement have told us we must “keep fossil fuels in the ground”.

This was seen in part as a way to encourage the second part of the decarbonisation strategy, namely for people to “invent something”. In other words, if we have no gas and no way to balance the grid, well, someone will come up with some way to fix the problem. So we first made the electricity grid unwelcoming for gas-fired power stations, then we neutered the nascent shale gas industry with absurd regulations, and then we banned it completely.

This is entirely consistent with New York’s CLCPA implementation.

Which brings us to where we are today, with the whole country crossing its fingers and praying that someone will “invent something”, or at least find us a way to make it through the winter without the lights going out.

For twenty years, the vested interests have had their say, and public relations have taken precedence over engineering and economics. But, to return to Professor Feynman, Mother Nature really cannot be fooled, and when she reveals her hand, the results are likely to be horrible.

Is catastrophe coming? I fear so, unless ministers get a grip and liberate the private sector to go for gas, right now.

New York’s problems are not so imminent largely because Pennsylvania went ahead with the natural gas fracking and now has an abundance of natural gas to sell to New York.  Nonetheless, National Grid has warned its customers in Central New York that natural gas bills could go up 31% because of increased demand and a global spike in prices.  I cannot help but wonder if New York had developed its natural gas resources if we would be seeing a similar price increase.

The slow motion train wreck that is the future of New York energy under the CLCPA will only continue to a similar crisis unless it is repealed for all of the reasons shown in MP Steve Baker’s commentary.  To date “vested interests have had their say, and public relations have taken precedence over engineering and economics” but at some point, reality has to be addressed.  The fact is that today’s wind, solar and energy storage technology is not up to the role conceived by the authors of the CLCPA.