“Clean Energy Awards” Don’t Matter Near As Much As Fracking

The 76West competition has spent millions to promote and build clean energy in New York, but it still doesn’t matter near as much as fracking.

Governor Cuomo announced this year’s winners of the 2020 76West Clean Energy Competition on October 19, 2020.  This post discusses the competition, its record, and this year’s awards.

I follow New York energy policy closely because its implementation affects my future as a New Yorker.  I am not sure that the reliability and affordability of the electric system can be maintained under the Cuomo administration.  The opinions expressed in this post do not reflect the position of any of my previous employers or any other company I have been associated with, these comments are mine alone. 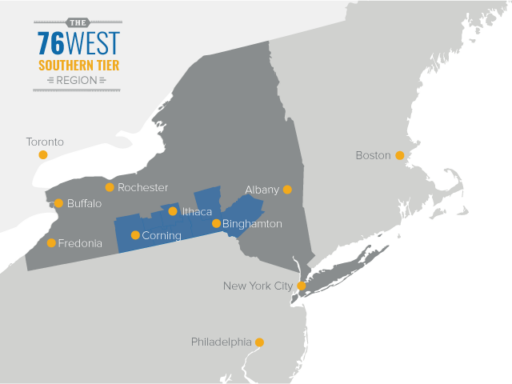 Before I explain what this program is really about here is the 76West website description:

“76West is an unparalleled competition focused on growing entrepreneurs and attracting resources from the U.S. and around the world to build clean energy businesses and jobs in New York State’s Southern Tier region. Administered by NYSERDA, the 76West Competition  was launched in 2016 as a $20 million four-year initiative to grow the clean energy ecosystem in the Southern Tier with funds from the Regional Greenhouse Gas Initiative and the Clean Energy Fund. Due to its significant positive impact for the region, the competition is being funded this year by Empire State Development through the Southern Tier Soaring Upstate Revitalization Initiative. The Competition supports technological and other innovation initiatives to meet New York State’s climate and decarbonization goals. “

The first question is why is there a focus on New York State’s Southern Tier region.  The Southern Tier spans eight counties along central New York’s southern border with Pennsylvania.  In 2015 the New York Department of Environmental Conservation (DEC) finalized an environmental impact statement that effectively banned hydro-fracking in New York State based on the Department of Health’s public health recommendation that the activity should not proceed in the state.  In January 2020, Cuomo announced legislation in the fiscal year 2021 executive budget to make the ban permanent and that legislation was passed later in the year.  Cuomo’s announcement notes that:

“In the wake of the ban, the clean energy ecosystem in the Southern Tier has grown rapidly over the last five years, fueled by a variety of programs and resources. New companies have sprouted in the Southern Tier with innovations in a wide variety of clean energy sectors, supporting over 4,100 jobs as of 2017. Examples of this industry density include the success of 76West Clean Energy Competition, new business like Imperium3, Sungeel, and Micatu locating in the ST, and the most recent spotlight on the region’s clean energy expertise with the 2019 Nobel Prize in Chemistry awarded to Binghamton University’s Stan Whittingham. These efforts have been bolstered by Southern Tier Soaring, the URI-winning strategic plan developed by the Southern Tier Regional Economic Development Council.”

There you have it.  The eight counties in the Southern Tier were the counties adjacent to Pennsylvania where hydrofracking was proposed before the ban.  The progressive meme is that we don’t need fossil fuels for jobs because the clean energy economy will provide jobs.  So, this program is a bone thrown out to the Southern Tier to make up for the economic benefits lost by the fracking ban.

Not surprisingly the awards are described in multiple places.  You can “Sign in to review information on competitors, judges and mentors, view videos and more on the 76West Competition Platform”.  There is a competition results page for each year’s winners.  I have also summarized the winners in the 76West Competition Winner Summary   According to the website description: “76West is designed to help clean energy technology startups develop in the region, get early users for their technologies, as well as further develop the community of clean tech innovators, industry experts, educators, and investors.”

In 2020, Montreal based TermoAI won the $1,000,000 prize for “Optimizing and automating industrial combustion with patent-pending artificial intelligence to reduce greenhouse gas emissions and increase energy efficiency.”  While this is needed for the future system it is nothing new.  I recall companies offering similar services to Niagara Mohawk when I worked there 20 odd years ago albeit the sales pitch then was that it would reduce nitrogen oxides emissions and decrease fuel costs by improving efficiencies.  AGreatE, Inc. won a $500,000 prize for “Making renewable energy affordable and accessible by producing artificial intelligence-enabled battery-based energy storage systems.”  Energy storage is a critical need for the future energy system.  COI Energy Services, Inc. won a $500,000 prize for “Improving building energy performance and grid optimization with software-as-a-service solutions.”    Optimizing energy efficiency is another aspect of the future energy system that is needed.  Combplex won a $500,000 prize for “Creating a farming ecosystem that sequesters more greenhouse gases by eliminating pests that threaten the health of honeybee hives.”  Their web page states: “Our mission is simple. Help beekeepers, help farmers, and help pollinators to create a more resilient farming ecosystem. Not clear how this relates to clean energy.

In 2016 Micatu won a $1,00,000 prize for “optical sensor for highly accurate real-time grid monitoring.  Their web site includes a picture of their new work headquarters in Horseheads, NY so I imagine that their award facilitated that move.   Charge CCCV won a $500,000 prize for energy storage batteries with longer lifetimes to reduce costs.   They are an “intellectual property company” and “By state mandate, the company is located in designated space at Binghamton University.”  West76 awarded $250,000 prizes to Besstech for “Silicon-based electrodes to make energy storage batteries cheaper, fast-charging and more environmentally friendly”; ChromaNanoTech for “Dye which blocks invisible radiation in windows to reduce air conditioning loads”; Concertio for “Software that reduces the energy consumption of data centers”; and Global Thermostat “Captured carbon dioxide and purifies it for industrial manufacturers”  but appears to be more oriented to carbon capture technologies.  Besstech is an electrode design and engineering venture based in Albany, New York. ChromaNanoTech was founded in 2014 at the Binghamton University incubator so this prize does help the Southern Tier.  Concertio headquarters are in Manhattan but on their about page there are two references to Cornell which is located in Ithaca within the Southern Tier.  Global thermostat is also headquartered in Manhattan.

NYSERDA is responsible for the initiatives to be supported by Regional Greenhouse Gas Initiative (RGGI) auction proceeds. The RGGI Operating Plan is “designed to strategically invest across disciplines, economy wide, in a way that supports comprehensive strategies that best advance the CO2 emission reductions goals of the State”.  RGGI is ostensibly a GHG emission reduction program but emission reductions since the inception of the program are primarily due to the hydrofracking technology that New York banned than the program itself.  I have shown that the cheaper price of natural gas due to hydrofracking made natural gas a cheaper alternative than coal and oil, the only reductions due to RGGI are those from the investment of its proceeds.  At some point, however, further reductions in CO2 emissions will need to come from these kinds of investments.

The last time I reviewed the NYSERDA RGGI investments I found that none of the NYSERDA investments of RGGI auction proceeds meet the social cost of carbon criterion of a cost-effective control strategy.   I believe that New York will propose to use the Obama era social cost of carbon value which is $50 in 2019.  The Consolidated Summary of Expected Cumulative Annualized Program Benefits through 31 December 2018 table summarizes the benefits and costs. It shows that for a total of $558 million invested that the total claimed GHG savings are 1,203,781 tons for a cost benefit of $463.54 per ton reduced, almost ten times higher than the social cost of carbon.

According to the 2020 RGGI Operating Plan Amendment numbers shown in the 76West Financial Awards and NYSERDA RGGI Funding Summary, RGGI is the primary source of funding for the 76West program.  Clearly, the 76West competition does not emphasize strategies that best advance CO2 emissions reductions goals of the State.  That suggests that this competition is one of the reasons why the RGGI investments are not producing socially cost of carbon effective reductions.

“New York has made unprecedented progress in reducing its carbon footprint, while making great strides in transforming the economy into one that is cleaner, greener, stronger and more sustainable than ever before,” Governor Cuomo said “The Regional Greenhouse Gas Initiative has been an incredible success in reducing emissions throughout New York and the Northeast, while supporting thousands of jobs and billions of dollars of investments in green development projects.”

As noted above.  I have shown that the cheaper price of natural gas due to hydrofracking was the primary cause of the “unprecedented progress” in reducing New York’s carbon footprint.  Furthermore, RGGI investments have not been effective tools to reduce emissions.  These facts directly contradict Cuomo’s claims.

According to the NYSERDA October 19, 2020 press notice announcing the winners of the 76West clean energy business competition “Winning companies will spur clean energy innovation in support of Governor Cuomo’s nation-leading climate and clean energy agenda”.  Even this cursory check of the winners of the competition illustrates that the winning projects will do little to achieve the climate emission reduction goals which are the primary drive of the clean energy agenda.  If one were to try to estimate the actual CO2 reductions that might result from these winning programs relative to the awards, I am sure the cost per ton reduced would be much higher than the general numbers that I extracted previously.

The poster child for well-intentioned work but without any obvious connection to clean energy is the Combplex award for technology to track honey bee disease.  According to the Wall Street Journal, New York faces a $59 billion revenue shortfall.  In this time of clear financial crisis and the purported existential climate crisis, if funding intended to make the transition to clean energy is diverted to anything other than clear clean energy projects, then it would seem that decision makers are short changing their clean energy posturing for political gain.