Clean Hands Andy saves the day with prison produced hand sanitizer guaranteed, if you are a New Yorker, to help you appreciate your governor! And, gas, too?

New York has a state-made hand sanitizer. Yes, indeed. arrogant Andrew Cuomo, the Empire State’s Emperor in His Dreams, now wants to be known as Clean Hands Andy and he’s determined to be Chief Medical Meddler, Capitalist Corruption Czar and Gaia’s Green God as well, all at the same time. He’s making it with prison slave labor and bragging it about it at the same time, of course, which is par for the course with this governor, who misses no opportunity to demagogue, deceive and disparage. But, does he realize he just endorsed natural gas?

Clean Hands Andy is so happy with himself. Known affectionately here as “Governor Corruptocrat” he’s never had an opportunity like this; an occasion to let us all know he has clean hands. Yes, he’s now Clean Hands Andy! He’s also proud to tell us how wonderful his new hand sanitizer smells. And, to inform everyone New York State will produce 100,000 gallons of its hand sanitizer for schools, prisons, and government agencies. give it away the stuff, being made for $6/gallon at Great Meadow Correctional Facility in Washington County, to eligible institutions.

Cheers! Throw a parade! Clean Hands Andy has done it! Except… 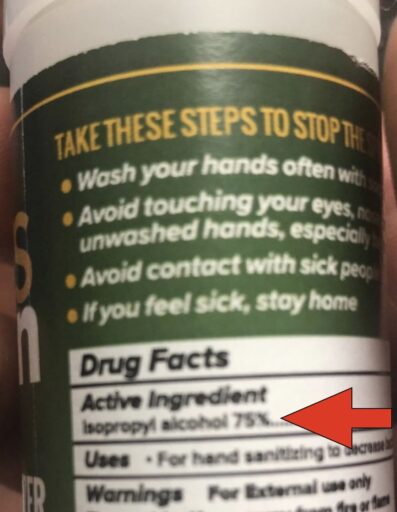 Well, the state-made hand sanitizer’s active ingredient is isopropyl alcohol, 75% isopropyl alcohol, in fact, which Cleans Hands Andy will be happy to tell you is better than 70%, except that it isn’t, but don’t spoil it for him. Let him believe that one.

But, we can’t let this go; isopropyl alcohol is made with propene:

In 1994, 1.5 million tonnes of isopropyl alcohol were produced in the United States, Europe, and Japan. It is primarily produced by combining water and propene in a hydration reaction or by hydrogenating acetone.

And, get this; propene is a byproduct of oil refining and natural gas processing:

Propene is a byproduct of oil refining and natural gas processing. During oil refining, ethylene, propene, and other compounds are produced as a result of cracking larger hydrocarbons. A major source of propene is naphtha cracking intended to produce ethylene, but it also results from refinery cracking producing other products. Propene can be separated by fractional distillation from hydrocarbon mixtures obtained from cracking and other refining processes; refinery-grade propene is about 50 to 70%.

Yes, Clean Hands Andy is touting the use of a product with an ingredient, the use and production of which he has worked to halt with bans on fracking and his ridiculous pipeline obstruction. He claims is smells like “floral bouquet” with hints of “lilac, hydrangea, tulips, but the truth, Clean Hands Andy, is that your leadership stinks. We’d say “you can make this stuff up” but that trite phrase hardly does justice to this craven silliness. Get out while you can my friends before he puts up walls to keep you inside and tells you it’s for your own good, so he can protect you from disease, disaster and us.