[Editor’s Note: New York’s Climate Act is about to destroy energy reliability and energy affordability for all New Yorkers if knowledgeable people don’t speak up to stop it!.]

New York’s Climate Leadership and Community Protection Act (Climate Act) has a legal mandate for the state’s greenhouse gas emissions to meet the ambitious net-zero goal by 2050.  I have written a couple of recent posts (here and here) that described issues that have been raised by New York’s electrical grid experts but, as far as I can tell, are not being considered by the Climate Action Council.  I think part of the reason for this inaction is that the New York Independent System Operator (NYISO) has not come out in public explaining the issues that could affect reliability.  Gordon van Welie, the president and CEO of Independent System Operator of New England (ISO-NE), recently gave an interview that succinctly describes those issues. 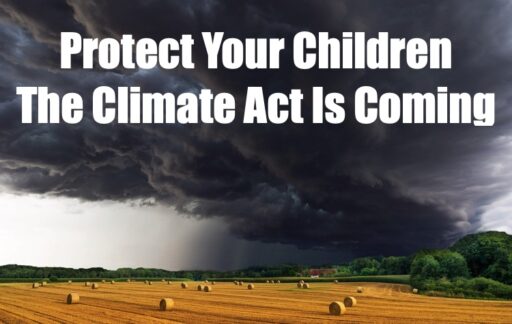 I have written extensively on implementation of New York’s Climate Act because I believe the ambitions for a zero-emissions economy embodied in the Climate Act outstrip available renewable technology such that it will adversely affect reliability, impact affordability, risk safety, affect lifestyles, and will have worse impacts on the environment than the purported effects of climate change in New York.  New York’s Greenhouse Gas (GHG) emissions are less than one half one percent of global emissions and since 1990 global GHG emissions have increased by more than one half a percent per year.  Moreover, the reductions cannot measurably affect global warming when implemented.   The opinions expressed in this post do not reflect the position of any of my previous employers or any other company I have been associated with, these comments are mine alone.

As shown in the following overview summary. the Climate Act establishes a “Net Zero” target by 2050, various renewable energy mandates, a social equity component, and, of particular concern to me, a requirement for zero-carbon electricity by 2040. The Climate Action Council is responsible for preparing the Scoping Plan that will “achieve the State’s bold clean energy and climate agenda”.  They were assisted by Advisory Panels who developed and presented strategies to meet the goals to the Council.  Those strategies were used to develop the integration analysis prepared by the New York State Energy Research and Development Authority (NYSERDA) and its consultants that quantified the impact of the strategies.  That analysis was used to develop the Draft Scoping Plan that describes the strategies to achieve the mandates.  It was released for public comment on December 30, 2021, and comments on the draft can be submitted until June 10, 2022. 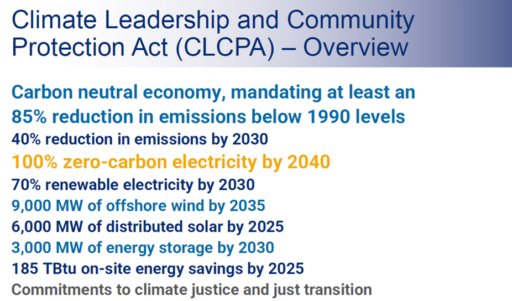 In my opinion, the most pressing problem is the 100% zero-carbon electricity by 2040 mandate.  As described in my aforementioned posts, NYISO staff experts have generated analyses that are very concerning.  They have determined that on the order of three times the current total generating capacity will have to be built in the next 19 years.  Of that total, Dispatchable Emissions-Free Resources (DEFR) will be needed equal to around the total current capacity.  That is problematic because there is no resource available that generate power with the required characteristics.  During working meetings, those findings have been described as “stunning” and the question whether anyone is listening was asked.

Reliability and affordability must not be compromised by the Climate Act.  I think the NYISO has to step up and publicly confront the Climate Action Council about their lack of apparent concern about these reliability issues.  Furthermore, it is laughable that the Draft Scoping Plan claims that the benefits out-weigh the costs when their implementation plan relies on some unknown and untested technology that cannot possibly be budgeted.

The Air Traffic Controller of Electricity

Commonwealth magazine published an article about the ISO-NE role operating the electric grid entitled “The Air Traffic Controller of Electricity”.  It describes an interview with Gordon van Welie, the president and CEO of ISO-NE that addresses the issues associated with the transition to an electric grid that relies on wind and solar generating resources.

Gordon van Welie, the president and CEO of ISO-NE), says there are four pillars that support the regional power grid his organization oversees, and all four are showing signs of stress.

Pillar number one is renewable energy. With clean electricity the key to decarbonizing the transportation and heating sectors, van Welie says New England needs to produce or procure a lot more renewable energy. “It’s clear we’re not going fast enough,” he said on The Codcast.

Clearly if you want to decarbonize the energy, sector then wind and solar resources are needed.  Note that he makes the point that New England needs to both procure and produce more renewable energy.  It is a little-known fact and something that has not been incorporated into the New York Climate Act numbers that there are wind farms in New York that have contracts with New England generators for their “zero-emissions” credits.  If those generators are used to also provide credits for the Climate Act, then there is double-counting.  As noted before, the Draft Scoping Plan calls for enormous quantities of wind and solar must be developed.

The same issues will undoubtedly arise in New York.  There is another transmission issue associated with an electric grid that relies on wind and solar.  Generating sources that produce electricity by spinning turbines provide ancillary services needed to maintain synchronous transmission grid stability.  Wind and solar generators are asynchronous so another resource has to be included to provide those services.

Pillar number three is the need for balancing resources, electricity that can be called on as backup when the sun isn’t shining or the wind isn’t blowing. “The problem in New England is we don’t have a very predictable input source into the electric grid, particularly in the winter time when the gas pipelines are constrained,” he said. “I really see [natural] gas the only option for balancing the system at the moment.”

Van Welie says other options for balancing fuels could be pursued, including clean hydrogen. But he sees little effort to seek out alternatives. “I don’t see any focus on that problem in the region,” he said. “We’re just relying on essentially season by season spot purchases of imported fuels and eventually we’re going to come up short with that strategy. “

The NYISO requirement for DEFR addresses this need for balancing resources. The Climate Act does not allow natural gas to be used for balancing the system.  The Draft Scoping Plan placeholder resource for DEFR is hydrogen.  I agree that there is no regional focus, including New York,  on that problem.

The final pillar is energy adequacy. When it gets cold, and the gas pipelines coming into the region reach their limit, New England can run short of the key fuel needed to run the region’s power plants. Even when it’s not that cold, the high price of natural gas can affect the regional market.

This winter, for example, the war in Ukraine sent fossil fuel prices soaring on world markets. The higher prices for natural gas prompted New England’s electricity generators to shift to relatively lower-priced oil and even coal for fuel, both of which drove up greenhouse gas emissions. All that happened even as the winter was relatively mild.

“It’s the second most expensive winter in our history of the wholesale markets, surpassed only by the winter of 2013-14, when we had a polar vortex,” van Welie said.

Energy adequacy in New York will be an issue when the state relies on wind and solar resources for the majority of its needs.  Until such time that an analysis of wind and solar resource availability over at least 70 years is completed New York won’t even know the worst case resource availability .  If that is not known then it will be impossible to adequately plan for energy adequacy.

Van Welie likens ISO-New England to the air traffic controllers who keep planes flying safely. Like air traffic controllers, ISO-New England doesn’t own what it oversees — the region’s electricity generating plants or transmission lines. Yet through management of the grid and oversight of various wholesale markets the grid operator is charged with getting power to where it needs to go and keeping the lights on.

This is also a good description of  NYISO responsibilities in New York.

Van Welie said it’s his responsibility to draw attention to problems as they arise, even if his warnings are not welcomed by environmental advocates who want to dispense with the use of fossil fuels immediately.

“I certainly do feel like I’m under fire and the organization as a whole is under fire,” he said.  His big fear is that demand for electricity will one day outstrip supply and force the grid operator to bring demand and supply back into balance by shutting off power to customers on a rolling basis.

In New York the Climate Act is a state law to dispense with the use of fossil fuels as soon as possible.   Note, however, that the law did not include a feasibility analysis.  The Climate Action Council does not want to hear there are issues.  Nonetheless, the NYISO has an obligation to keep the lights on and eliminating fossil fuels on the mandated schedule may not be compatible with current standards of reliability.  Thomas Sowell said “It is hard to imagine a more stupid or more dangerous way of making decisions than by putting those decisions in the hands of people who pay no price for being wrong” and that is exactly what we will be doing if the Council does not listen to the experts.

The reliability oblivious Draft Scoping Plan is not addressing the four pillars described by van Welie.  I have previously described this approach as similar to wanting to jump out of a perfectly good airplane without a parachute assuming that the concept of a parachute will be developed, proven technically and economically feasible, and then delivered in time to provide a soft landing.  The president and CEO of ISO-NE has described four parachutes that should packed before jumping out of an airplane.  He sees the future clearly and is willing to speak the truth about the missing parachutes.

I wonder if the NYISO will forcefully comment on these issues on the Draft Scoping Plan document.   I have just about given up hope that they will make these comments in a public forum.  My only hope is that these issues are being discussed in private with the Climate Action Council.  Unfortunately, there are no hints that is happening.