Climate Act Benefits Mostly Imaginary But Costs Will Be Real

[Editor’s Note: A utopian “Clean Heat for All Challenge” plan advanced by New York agencies to implement the state’s Climate Act shows us benefits are few but costs are real.]

This article describes the Clean Heat for All Challenge and the disconnect between the plan and reality.  New York City Housing Authority (NYCHA), New York Power Authority (NYPA) and New York State Energy Research and Development Authority (NYSERDA) launched the Clean Heat for All Challenge as “an industry competition directed at heating and cooling equipment manufacturers to develop a new electrification product that can better serve the needs of existing multifamily buildings and hasten the transition to fossil-free heating sources”.  Sounds wonderful until you look at the details and differences with New York’s net-zero transition plan.

Everyone wants to do right by the environment to the extent that they can afford to and not be unduly burdened by the effects of environmental policies.  I have written extensively on New York’s net-zero transition and the implementation strategies needed for it because I believe the ambitions for a zero-emissions economy outstrip available renewable technology such that this supposed cure will be worse than the disease.  Moreover, many of the implementation requirements are going to increase costs tremendously.  The opinions expressed in this post do not reflect the position of any of my previous employers or any other company I have been associated with, these comments are mine alone.

The impetus for the need clean heat is driven by the multifamily buildings electrification transition required for New York’s Climate Leadership and Community Protection Act (Climate Act) and New York City’s Local Law 97.  Both the Climate Act and Local Law 97 are intended to meet a “Net Zero” target (85% reduction and 15% offset of emissions) by 2050.  The Climate Action Council has been working to develop plans to implement the Climate Act.

Over the summer of 2021 the New York State Energy Research & Development Authority (NYSERDA) and its consultant Energy + Environmental Economics (E3) prepared an Integration Analysis to “estimate the economy-wide benefits, costs, and GHG emissions reductions associated with pathways that achieve the Climate Act GHG emission limits and carbon neutrality goal”.  Integration Analysis implementation strategies were incorporated into the Draft Scoping Planwhen it was released at the end of 2021 for public comment.  The multifamily electrification documentation for the Integration Analysis was used in this post.

Clean Heat for All Challenge

The press release for announcing this initiative was titled “NYCHA, NYPA and NYSERDA Announce Global Innovation Challenge to Decarbonize NYCHA Buildings Using New Heat Pump Electrification Technologies”.  Because GHG emissions from buildings is the largest remaining sector in the State, the Integration Analysis proposes to replace all fossil-fired generation with electric heat pump options.  The press release describes the goals of the challenge:

The challenge calls upon manufacturers to develop a packaged cold climate heat pump that can be installed through an existing window opening to provide heating and cooling on a room-by-room basis. The envisioned product would enable rapid, low-cost electrification of multifamily buildings by reducing or eliminating many of the cost drivers inherent to existing heat pump technologies when used in resident occupied apartments. These include costly electrical upgrades, long refrigerant pipe runs, drilling through walls and floors and other construction aspects which result in high project costs, and significant disruption to residents.

The Clean Heat for All Challenge directly supports the goals of New York State’s Climate Leadership and Community Protection Act (Climate Act) and the New York City Climate Mobilization Act, which both call for greenhouse gas emissions from buildings to be reduced by 40 percent by the year 2030. The partnership between the New York City Housing Authority, New York Power Authority, and New York State Energy Research and Development Authority and will test innovative products and proposals for cost-effective heating and cooling solutions for NYCHA building portfolio, which includes 2,198 residential dwelling buildings. Additionally, NYCHA, NYPA, and NYSERDA have also engaged with the Consortium of Energy Efficiency (CEE) to engage manufacturers and encourage broad industry participation in the Clean Heat for All Challenge.

The RFP issued by NYPA identifies a list of product specifications that manufacturers will be challenged to meet. To incentivize participation, NYCHA will commit to purchasing the first 24,000 units from the awarded vendor(s) that will be installed at six developments currently slated for heating plant replacement over the next five years. NYSERDA is supporting the effort by providing additional funding from the Regional Greenhouse Gas Initiative operating plan, which calls for the electrification of heating in New York City public housing to improve energy performance, decrease emissions, and improve resident comfort. NYSERDA will provide assistance drafting the product specifications and performing commissioning as well as measurement and verification for the demonstration units. NYCHA will invest $250 million, in addition to the NYSERDA grant, to purchase and install the new equipment as well as provide additional improvements to the building envelopes and hot water systems.

The Clean Air for All Challenge press release described another partnership to reduce GHG emissions from a New York City high rise complex.  I will come back to the Challenge in a subsequent post but for now will discuss the 830 Amsterdam Ave Pilot Project:

NYCHA and NYPA are also partnering to replace the aging gas-and-oil-fueled heating and hot water systems at 830 Amsterdam Ave, a 20-story high-rise in Manhattan, with a high-efficient electric Variable Flow Refrigerant (VRF) heat pump system. The $28 million design-build electrification project will eliminate the use of on-site fossil fuel for heating and hot water while also providing central heating and cooling to 100 percent of apartments, replacing the old, inefficient window air conditioning units that have come to define many New York City-based facades. 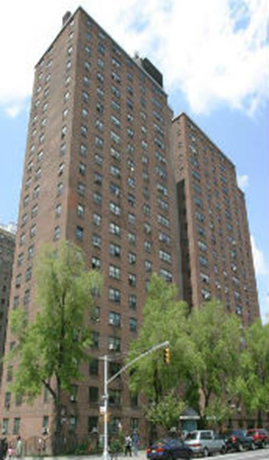 This new and more efficient heating and hot water system will reduce local greenhouse gas emissions by more than 590 metric tons, the equivalent of removing approximately 130 cars from the road. The heat pump system, which would be the first of its kind at a public housing facility in New York State, will operate entirely on the grid without the need of a fossil fuel source. Once complete, residents will be able to individually control the temperature in each room of their apartment, a significant improvement over the current system, which does not provide any individual apartment temperature control.

According to MYNYCHA 830 Amsterdam Ave. is a 20-story building completed on August 31, 1965.  The building has 159 apartments and 346 residents.  According to the Heating Action Plan there are two boilers that can burn fuel oil #2 or natural gas.  The boilers are 23 years old and no major challenges are listed.

Despite manufacturer claims about benefits using a Variable Flow Refrigerant heat pump system for this kind of structure, it is generally untested technology so this project can be considered a field test.  It appears that the system checks off all the building’s needs and it will meet all the energy needs of the building without the need of a fossil fuel source.  However, the “design-build electrification project” has a projected cost of $28 million and will only reduce emissions by 590 metric tons.  That works out to an astounding $47,458 per ton reduced or $176,100 per residence.  This is far above New York’s estimate of societal costs of carbon ($172 per ton in 2050).

The reality is that I don’t think this is an affordable electrification option.  NYCHA has 267 developments with a total of nearly 162,000 apartments for about 340,000 people.  If this technology were used for all those apartments the cost would be $28.5 billion.  Using Integration Analysis data. I estimate that there are 2,050,000 large multifamily residences in New York.  If this technology were used to electrify those homes the expected cost would be over $360 billion.  Even of the costs could be reduced by an order of magnitude costs are still over $36 billion for just this residential electrification sub-sector.

There are some issues related to the Integration Analysis.  There are differences in the treatment of this building sector. The total costs for all the devices for any option in the Integration Analysis are far lower than the cost per apartment.  In order for heat pump technology to maintain comfortable temperatures when temperatures drop below 20o F the building shell has to be upgraded or resistance heating has to be used.

The efficiency of heat pumps is a great benefit but the inefficiency of resistance heating is a big disadvantage.  The device costs for the “Basic” building shell upgrades for large multifamily residences in the Integration Analysis are double ($28,000) the cost as the heat pumps themselves ($14,000).  It is not clear if this “design-build electrification project” includes building shell upgrades.

These differences should be reconciled.  However, the response to Draft Scoping Plan comments has only described general themes of comments related to the Draft Scoping Plan document itself.  The comment response focus is entirely on the narrative in the text and what needs to be changed for the Final Scoping Plan.  There is no suggestion that there are any clarification or methodology issues related to the Integration Analysis that need to be addressed by the Climate Action Council.

This example illustrates just one issue for a single component.  The assumptions used to determine the device costs for heat pumps for the large multifamily building sector are inconsistent with this project.  NYCHA and NYPA determined that the appropriate electrification solution for this large multifamily building was a whole building variable flow refrigerant heat pump system.

I am working on another post related to the Clean Heat for All Challenge and noticed the description of the 830 Amsterdam Ave project.  As has been the case for every detail associated with New York’s plans for the transition to net-zero my review has found that implementation will be more complicated and likely more expensive than the description in the Draft Scoping Plan.  In this instance the 830 Amsterdam Ave NYCHA and NYPA electrification prototype project is extraordinarily expensive relative to the residences served ($176,100 per residence) and the New York societal value of carbon ($47,458 per ton reduced vs. societal benefits of $172 per ton in 2050).

In addition, there are differences between these projections and the Integration Analysis cost estimates that should be addressed.  Unfortunately, the Climate Action Council has shown no inclination to mention much less address any issues with the Integration Analysis that underpins the Draft Scoping Plan.  As a result, the fundamental assertion that the costs of inaction are greater than the costs of implementing the Climate Act transition are not supportable.

The totally ignored safety aspect of this and all the Draft Scoping Plan electrification plans also should be considered.  At this time 830 Amsterdam has a boiler system that can burn #2 fuel oil or natural gas and every apartment owner can install an electric space heater.  That is triple redundancy for heating the apartments.  The implementation plan is to convert completely to electric and make the safety of the residents dependent upon electric heat.  No where does the Scoping Plan address this inevitable “what if” impact.  The benefits of the Climate Act are mostly imaginary but the costs will be real.