[Editor’s Note: Implementation of the New York State Climate Act is based on phony data and cultural fairy tales with the explicit purpose of killing all fossil fuels.]

The Draft Scoping Plan that outlines the implementation strategy for New York’s Climate Leadership and Community Protection Act (Climate Act) has been released for public comment by the Climate Action Council. This article discusses the implications of the Climate Act requirement to consider upstream emissions from fossil fuels imported into New York.  I believe that only considering the impacts of fossil fuels and not the impacts of “clean” energy development is biased and hypocritical.

If you are more interested in a video that addresses the point of this article there is an option.  Ron Clutz at Science Matters provides a post with a link and excerpted transcript to the above video prepared by Deutsche Welle News, the German international broadcaster.  He explains:

The theme is described by adding a bit to the title: The Price of Green Energy Will Destroy Us.  The message is not about the exorbitant expense so much as the destruction of the world’s environment in order to save it.  The imagery in the video is compelling.

I have written extensively on implementation of the Climate Act because I believe the ambitions for a zero-emissions economy outstrip available renewable technology such that it will adversely affect reliability and affordability, risk safety, affect lifestyles, will have worse impacts on the environment than the purported effects of climate change in New York, and cannot measurably affect global warming when implemented. The opinions expressed in this post do not reflect the position of any of my previous employers or any other company I have been associated with, these comments are mine alone.

Starting in the Fall of 2020 seven advisory panels developed recommended strategies to meet the targets that were presented to the Climate Action Council in the spring of 2021.  Those recommendations were translated into specific policy options in an integration analysis by the New York State Energy Research and Development Authority (NYSERDA) and its consultants.

The integration analysis was used to develop the Draft Scoping Plan that was released for public comment on December 30, 2021. The public comment period extends through at least the end of April 2022, and will also include a minimum of six public hearings. The Council will consider the feedback received as it “continues to discuss and deliberate on the topics in the Draft as it works towards a final Scoping Plan for release by January 1, 2023”.  Once complete an updated Energy Plan will guide New York’s energy policy going forward.

The Draft Scoping Plan “Key Milestones and Implementation Steps To-Date” is on page 21 and states (my emphasis added):

This article concentrates on the significance and utter hypocrisy of the implications of “including upstream emissions from fossil fuels imported into New York as required by the Climate Act” into the Climate Act implementation process.

The Climate Act is hypocritical.  Throughout the Draft Scoping Plan electricity generated by wind and solar resources and the energy storage systems required to cover for the intermittency of those renewable resources is referred to as “zero” emissions.  Of course, there are no emissions when these resources generate electricity.  However, in the Climate Act accounting framework fossil fuel generation includes not only direct emissions but also any upstream GHG emissions attributable to the extraction, transmission, and use of fossil fuels or electricity imported into the State.

The development of wind, solar, and energy storage resources on the scale necessary for the Climate Act certainly have environmental and emissions impacts for extraction of the rare earth metals necessary for those technologies, the construction of the massive number of structures needed, and the disposal of the enormous quantities of wind turbine blades and solar panels at the end of their useful lives.  This article summarizes references to these issues that I have documented on my “Clean” Energy Environmental Issues page.

Paul Driessen summarizes my concerns in the Real Climate Crisis where he argues that the ecological destruction and human death tolls of the green energy transition is worse than the purported impacts of climate change.  He states:

They would require mining on scales unprecedented in human history, much of it by slave and child laborers, and nearly all using fossil fuels – bringing massive habitat and wildlife losses, air and water pollution, and horrific human health and safety problems. But since most of the mining, ore processing and manufacturing will occur in other countries, far from the USA, politicians and promoters of climate crisis can say this “alternative energy” is “clean and green.”

The EIA special report, The Role of Critical Minerals in Clean Energy Transitions, is the most comprehensive global study to date on the central importance of minerals such as copper, lithium, nickel, cobalt and rare earth elements in a secure and rapid transformation of the global energy sector.   The report explains that:

The types of mineral resources used vary by technology. Lithium, nickel, cobalt, manganese and graphite are crucial to battery performance, longevity and energy density. Rare earth elements are essential for permanent magnets that are vital for wind turbines and EV motors. Electricity networks need a huge amount of copper and aluminum, with copper being a cornerstone for all electricity-related technologies.

The reason this is an issue is because the clean energy technologies require more of these materials.  The report notes that:

A typical electric car requires six times the mineral inputs of a conventional car, and an onshore wind plant requires nine times more mineral resources than a gas-fired power plant. Since 2010, the average amount of minerals needed for a new unit of power generation capacity has increased by 50% as the share of renewables has risen. 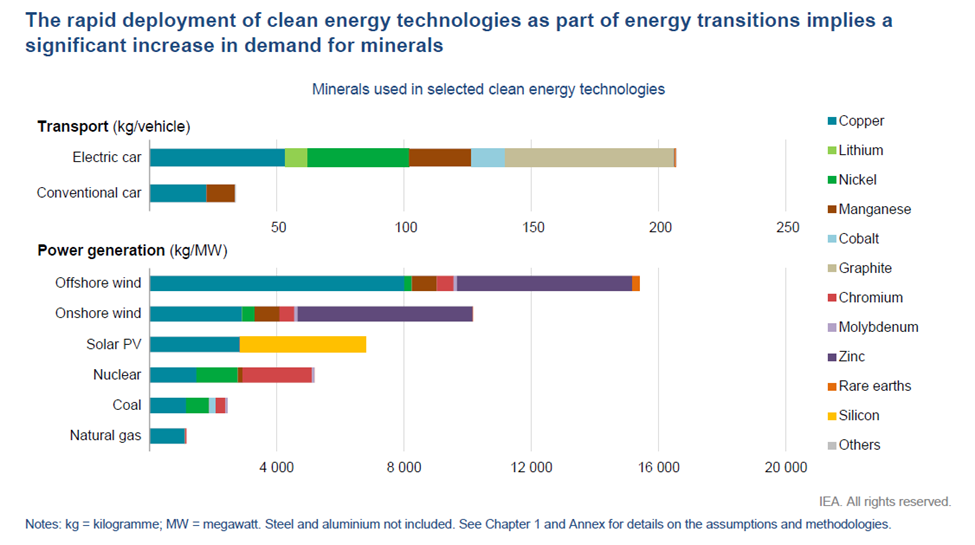 Above all, our dependence on rare metals brings two very big problems. The first is that mining, refining and recycling them is immensely polluting, thereby giving the lie to the idea that our increasingly digital and electricity-powered life is greener than one reliant on fossil fuels.

Second, one country – China – has a near stranglehold on the production and supply of rare metals. The Beijing government is not just seeking to control the metals found in its lands but also to control the production of rare metals wherever they are found on the globe. It has used barely credible chicanery to position itself as the sole supplier. It’s as if Saudi Arabia, which holds the world’s largest oil reserves, took it upon itself to control the reserves of the 13 other main petroleum-exporting countries.

The fact is that the European Union and the United States have little leverage to prevent Russia from invading Ukraine because they rely on Russia for the fossil fuels necessary to keep the lights on, homes heated, and transportation systems operating.  It seems obvious to me that it is imprudent to set up an energy system that is entirely dependent upon another nation whose interests may not be in our best interests.

Mark Mills’ Mines, Minerals, and “Green” Energy: A Reality Check paper from the Manhattan Institute picks up on the same themes:

This paper turns to a different reality: all energy-producing machinery must be fabricated from materials extracted from the earth. No energy system, in short, is actually “renewable,” since all machines require the continual mining and processing of millions of tons of primary materials and the disposal of hardware that inevitably wears out. Compared with hydrocarbons, green machines entail, on average, a 10-fold increase in the quantities of materials extracted and processed to produce the same amount of energy.

This means that any significant expansion of today’s modest level of green energy—currently less than 4% of the country’s total consumption (versus 56% from oil and gas)—will create an unprecedented increase in global mining for needed minerals, radically exacerbate existing environmental and labor challenges in emerging markets (where many mines are located), and dramatically increase U.S. imports and the vulnerability of America’s energy supply chain.

Because the quantity of materials needed for wind turbines and solar panels is so much larger and those machines have shorter life expectancies, the inevitable result will be a waste disposal problem.  Consider wind turbine waste disposal.  They are so big that they have to be cut up and because they were designed to handle strong winds they cannot be “crushed, recycled or repurposed.”   As a result, the sheer volume of material is an issue.

Robert Bradley describes a Harvard Business Review article, The Dark Side of Solar Power, that concludes that “given the current very high recycling costs, there’s a real danger that all used panels will go straight to landfills.”  Bradley excerpts some passages from the article:

Andy West’s statement about another aspect of net-zero policies is equally applicable to the Climate Act mandate to consider upstream fossil fuel emissions while ignoring the impacts of “zero” emissions environmental impacts: “Ardent belief in cultural fairy-stories creates a pretty effective blindfold against glaring truths.”  The Climate Act’s war on fossil fuels is based entirely on the popular belief that climate change is an existential threat.  Authors of the law incorporated every opportunity to inflate the impact of fossil fuels and ignored any negative ramifications.  It is evident there are significant issues associated with the materials necessary for the clean energy transition.  The Climate Act ignores them in a blatant example of hypocrisy.

Roger Caiazza blogs on New York energy and environmental issues at Pragmatic Environmentalist of New York.  This represents his opinion and not the opinion of any of his previous employers or any other company with which he has been associated,