Climate Act Will Do Nothing for the Climate, But Will Raise Energy Costs

[Editor’s Note: New York’s Climate Leadership and Community Protection Act (CLCPA) won’t make much of a difference with anything other than energy costs.]

The CLCPA was described as the most ambitious and comprehensive climate and clean energy legislation in the country when Cuomo signed the legislation but there is one massive flaw.  The lawmakers who enacted this law presumed that the transition of the state’s energy system could be implemented by political will so did not include feasibility conditions in the targets or schedules.  As a result, I believe the reliability and affordability of electricity will be affected.

I have summarized the schedule, implementation components, and provide links to the legislation itself at CLCPA Summary Implementation Requirements.  I have written extensively in long posts on implementation of the CLCPA because its implementation affects my future as a New Yorker.  I have described the law in general, evaluated its feasibility, estimated costs, described supporting regulations, listed the scoping plan strategies, summarized some of the meetings and complained that its advocates constantly confuse weather and climate.  The opinions expressed in this post do not reflect the position of any of my previous employers or any other company I have been associated with, these comments are mine alone. 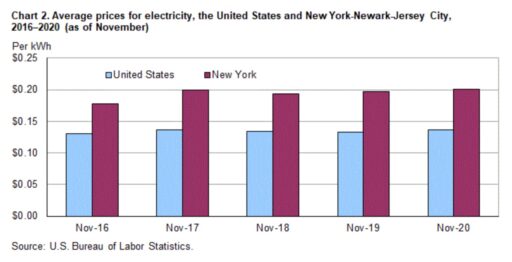 The 20.1 cents per kWh New York area households paid for electricity in November 2020 was 48 percent more than the national average of 13.6 cents per kWh. The difference will grow due to the CLCPA, effectively imposing a new tax on who are some of the nation’s most over-taxed residents, with no discernible impacts on the climate..

The CLCPA is going to radically change New York’s energy use in order to reach net-zero greenhouse gas emissions by 2050.  Over the past year, the implementation process has started and I am convinced that most New Yorkers have no clue what is coming so I have been trying to get the local newspaper to print a letter to the editor.

Last Fall I submitted a couple of letters specifically arguing that it should be a consideration when voting.  In early January I sent the following commentary, a longer letter to the editor, to the Syracuse Post Standard describing what is coming in an effort to get more people aware of the law.  In my cover letter I offered to discuss the law with the editorial board.  Around the same time, the newspaper sent out an email asking for reader input.  I responded to that too.  The answer in all cases was crickets.

The following is a hyperlinked version of my submittal:

New York’s Climate Leadership and Community Protection Act (CLCPA) became effective this year and the implementation process has started. Political appointees on the Climate Action Council and seven advisory panels are currently developing a scoping plan that outlines strategies for attaining the statewide greenhouse gas emissions targets of a 40% reduction of 1990 emissions by 2030 and a zero-emission electric sector by 2040.  The Department of Environmental Conservation (DEC) implemented two regulations supporting the CLCPA implementation late last year.

Only now is it becoming clear what this will mean to the residents of New York but I believe most people have no idea what is coming.  If you are worried about energy affordability and reliability, I recommend that you pay attention in the next several months as the plans to electrify as much of the economy as possible using mostly solar and wind are presented.

DEC implemented a rule setting the 1990 baseline and established a value of greenhouse gas emissions.  Following the precedent set by the CLCPA, the rules follow methodologies established by the Intergovernmental Panel on Climate Change (IPCC) where convenient but veer away when doing so suits the agenda.  In particular, the law and these rules intend to eliminate the use of fossil fuels as soon as possible.  When you hear the phrase no new fossil fuel infrastructure that means you won’t be able to buy gasoline or diesel vehicles by 2035 or heat your homes and water or cook with natural gas, oil, or propane in the same time frame.

By the end of 2024, DEC will promulgate rules and regulations to ensure compliance with the CLCPA targets.  Great Britain has similar targets and has proposed bans on fossil fuel heating systems in 2033 thereby mandating electrifying heating.  There also is a recommendation that properties cannot be sold unless they meet minimum energy efficiency standards in 2028.  To ensure compliance New York will have to do something similar.  Having lived through a couple of multi-day electric blackouts I am very leery about having to depend upon electricity to heat my home.  Despite significant investments in insulation and upgraded windows, my house is still uncomfortable at times during the winter.  I don’t think an electric heat pump is going to be able to adequately heat my home.

You will be told that this will be cost effective because it reduces the negative costs of climate change as established by their value of carbon guidance.  You probably won’t hear that the purported social benefits are based on impacts projected out to 2300, the benefits will accrue almost entirely outside of New York, and that even those benefits are highly dependent upon the assumptions made.  In every instance the values chosen maximize the alleged benefits to reduce carbon emissions.

You might hear that the State has done a wonderful job investing the proceeds from the existing Regional Greenhouse Gas Initiative program that already taxes your electricity.  You won’t hear that New York has the highest administrative costs of any state in the program and you won’t hear that the overall costs per ton reduced exceed the value of carbon benefits.  I am positive you won’t be told that after New York makes all those reductions that the global temperature will be reduced by less than the average temperature between your head and your feet.

I recommend Bjorn Lomborg’s recent book “False Alarm: How Climate Change Panic Costs Us Trillions, Hurts the Poor, and Fails to Fix the Planet”.  He shows that we are committing to try to solve climate change with policies that he demonstrates will not make much of a difference but will cost a lot and not do much to change global warming.  Moreover, “Our extraordinary focus on climate also means we have less time, money and attention to spend on other problems” and lists a host of ways the time and money could be better spent.  All his lessons are relevant to New York.

I am sure everyone agrees that if we could ensure better weather that we would be willing to spend more on energy, accept some inconveniences, and agree to fewer choices for energy systems.  However, the CLCPA will not solve global warming if only because the increases in emissions in developing countries are far greater than reductions we can meet.  How much people are willing to pay to try to set an example is a personal choice but many people are already having trouble paying for energy so this law must make affordability a primary condition.

Despite the claims of the renewable energy developers there are serious issues using solar and wind during a multi-day, light wind period in New York’s winters.  Finally, New York’s record for greenhouse gas emission reductions is not cost-effective relative to their benefits standard.  This all means that New York might better invest money in adapting to extreme weather, improving energy efficiency, and researching alternatives to fossil fuels that could bring down the costs.

I am disappointed that the Syracuse Post Standard chose to not publish this.  I think New Yorkers should be aware of the potential impact of the CLCPA on affordability and reliability as I outlines in this commentary.   None of the advisory panel strategies have included potential costs but I have no doubts that the costs will be extraordinary.  Keep in mind that all this was written before the Texas Energy Debacle showed what can happen if reliability is not adequately addressed.  I wrote that I don’t think something similar could happen in New York but I also am worried that serious challenges must be overcome to make a reliable system sufficiently robust to meet a similar extreme weather event and that meets the CLCPA mandates.

I encourage New York readers to follow the CLCPA and get involved.