The implementation plan for New York’s Climate Leadership and Community Protection Act (Climate Act) “Net Zero” target (85% reduction and 15% offset of emissions) by 2050 is being developed.  Here is a question for the Climate Action Council.  How do you expect to avoid the affordability and reliability issues evident in Europe occurring as their net-zero policies are implemented?

I have written extensively on implementation of the Climate Act and submitted extensive comments on the Draft Scoping Plan.  Everyone wants to do right by the environment to the extent that efforts will make a positive impact at an affordable cost.  Based on my analysis of the Climate Act I don’t think that will be the case.  I believe that the ambitions for a zero-emissions economy outstrip available renewable technology such that the transition to an electric system relying on wind and solar will do more harm than good.  The opinions expressed in this post do not reflect the position of any of my previous employers or any other company I have been associated with, these comments are mine alone.

The Climate Act established the Climate Action Council who is responsible for preparing the Scoping Plan that will “achieve the State’s bold clean energy and climate agenda”.  They were assisted by Advisory Panels who developed and presented strategies to meet the goals.  Those strategies were used to develop the Integration Analysis prepared by New York State Energy Research and Development Authority (NYSERDA) and its consultants that quantified the impact of the strategies.  That analysis was used to develop the Draft Scoping Plan that was released for public comment on December 30, 2021 and will be finalized in 2022.

The Climate Action Council has set up three subgroups to consider alternative fuels, economy-wide strategies to fund the transition, and gas system transition.  While I do not deny that these are worthwhile topics, I am disappointed that reliability, feasibility, and affordability are not being explicitly considered.  This is of particular concern given the energy affordability and reliability crises underway in Europe.

Net Zero Watch publishes a newsletter that describes climate and decarbonization policies, what they cost, whether they are delivering and what their real impact is on the environment.  Based in Great Britain they are following the affordability impacts of current net-zero energy policy.  The latest reports from their newsletter are disturbing.

The Office of Gas and Electricity Markets (OFGEM), supporting the Gas and Electricity Markets Authority, is the government regulator for the electricity and downstream natural gas markets in Great Britain.  The energy price cap is a backstop protection from the government for people who default onto their supplier’s basic energy tariff. Ofgem calculates the cap level that suppliers must apply to these tariffs. 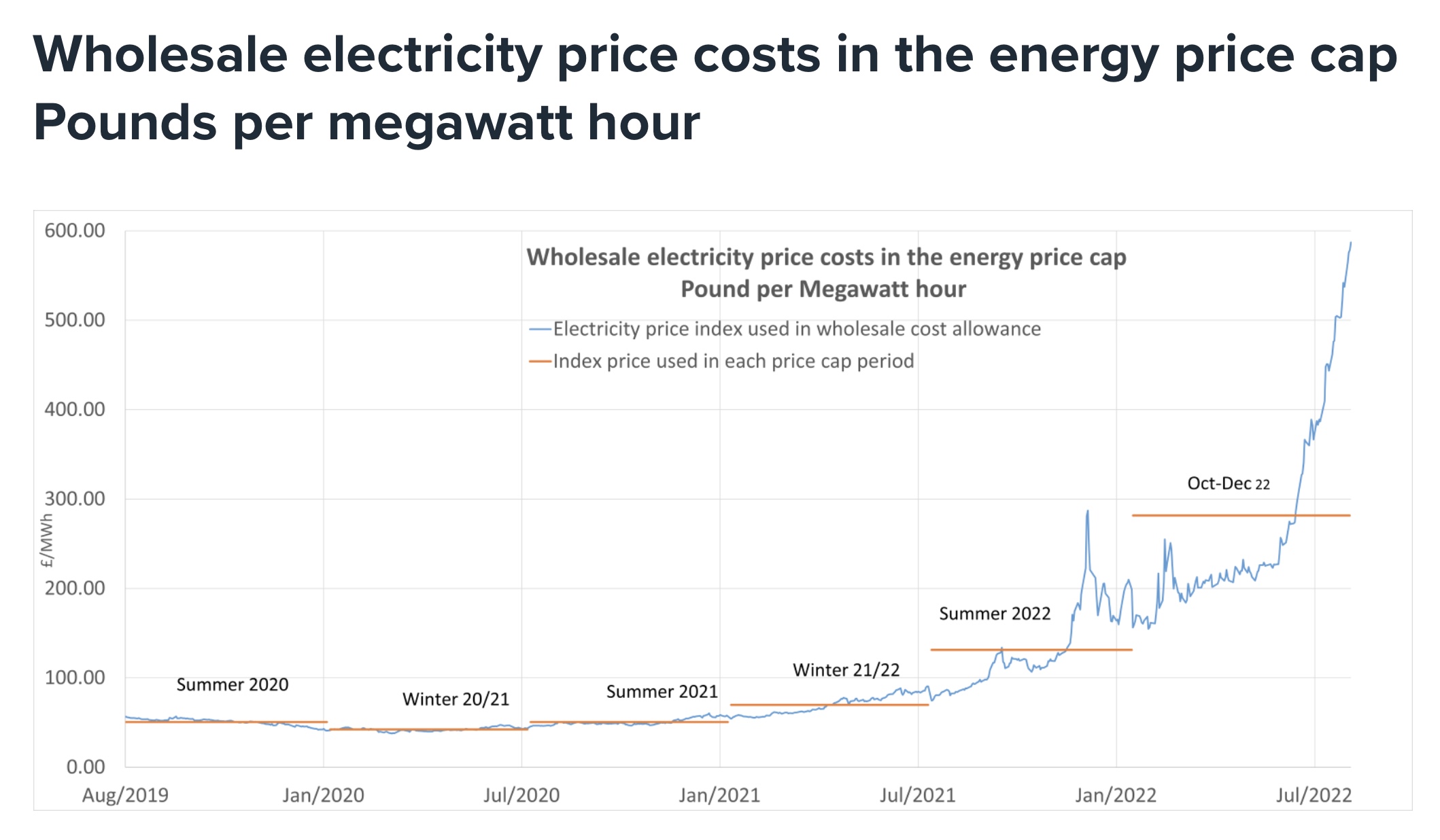 What’s happening in England now is what New York’s Climate Action Council wants for New Yorker electricity consumers too! This is what “Net Zero” means in the real world.

According to the Independent, August 27, 2022, the “United Kingdom faces ‘catastrophe’ after energy bills soar 80% amid warning price cap could hit £7,000”.  The article notes that:

Regulator Ofgem has revealed that the price cap, which is supposed to protect consumers from unfair energy bill increases, will rise to £3,549 per year for an average household – more than three times last winter’s level. That is expected to leave some 8.9 million households in fuel poverty, charity bosses have said, with a “real risk” that children will go hungry as Britain’s poorest see almost half of their income taken up by gas and electricity.

There also were articles describing the impacts beyond the obvious energy poverty ratepayer effects.  The energy caps apply only to consumers but not, for example, health care providers.  It has been reported that:

The chief executive of Care England said providers faced a staggering 683 per cent increase in energy costs during the past 12 months, with bills expected to rise again early next year. For gas and electricity, the costs were £660 per bed, per year, this time last year; this week, care providers have to pay an astonishing £5,166.

The Daily Telegraph writes that this is not just a problem for low-income people.  In an interview with the Telegraph, Nadhim Zahawi said that “support cannot be confined to families on benefits and added that gas prices could remain punishingly high for two years.”  He went on to say: “If you are a senior nurse or a senior teacher on £45,000 a year, you’re having your energy bills go up by 80 per cent and will probably rise even higher in the new year – it’s really hard”.

An editorial in the Wall Street Journal brings home the impacts of these high prices.  It notes that the latest price increases bring the average household’s annual bill to £3,549 and that the median household income is £31,400.  That means that for half of the households if their average annual budget for central heating, cooking, and keeping the lights on is equal to the average that the percentage of income spent on energy is over 11%.  New York has an energy poverty target of only 6% so if the adverse affordability effects of New York net-zero implementation are anyway similar then we can expect a major increase in the number of households in energy poverty.

Writing at No Tricks Zone, P. Gosselin translates an article from Die kalte Sonne.  He explains that Germany’s massive, subsidized expansion of electricity generation from renewable sources has squeezed conventional generation units out of the market. Two experts warn of growing grid instability.

The conclusion of the two is very alarming. Here, too, not a word about “storage facilities galore. Here, reality clashes with the wishful thinking of some green energy protagonists who think there is enough storage and that all that needs to be done is to change the “mindset,” as Patrick Graichen put it.

The continued expansion of highly volatile renewable energy sources and the further displacement of more conventional generation units from the market are making the power grid increasingly sensitive to weather-related fluctuations. Unusual weather phenomena such as dark doldrums pose significant challenges to the security and stability of supply to the power grid. The largely intermittent output of solar and wind farms does not correlate with fluctuations in electricity demand.

The excess supply of renewable energy should be buffered during periods of low electricity demand, and the stored capacity should be injected back into the grid during periods of high electricity demand when fewer renewable sources are available. However, large battery energy storage systems, which have been promisingly announced, are still not on the horizon due to their low capacity and maturity, as well as their exorbitantly high cost of deployment.”

At this point, at the latest, some people’s ears should be ringing:

As long as economic energy storage systems are not established, even proponents of the current direction of Germany’s energy transition will have to admit that reliable conventional power plants will be needed for a long time to come.”

This article is also an urgent reading recommendation for politicians and experts who like to be interviewed.

So without nuclear power in Germany, grid stability problems are a future certainty.

At the August 23, 2022 Climate Action Council meeting some of the comments were discussed.  Among the 35,000 comments submitted were around 900 with attachments including “some still being reviewed and summarized.”

There was no mention of a couple of points I raised in comments about specific Climate Act mandates including one for the Climate Action Council  to consider results from other jurisdictions and another for the New York Public Service Law  § 66-p. “Establishment of a renewable energy program” safety valve conditions for affordability and reliability.  In order to address both mandates the Climate Action Council should respond to the question: How do you expect to avoid the affordability and reliability issues evident in Europe occurring as their net-zero policies are implemented?

I don’t think there is any way to avoid the issues seen in Europe.  So, I have to wonder whether the Climate Action Council is willfully or naively ignoring the energy crisis as it unfolds.  In any case failure to account for the issues will ensure that New York goes over the same cliff.