Climate Action Council Will Pay No Price for Being Wrong!

Climate Action Council Will Pay No Price for Being Wrong

[Editor’s Note: New York’s Climate Act is about to destroy energy reliability and energy affordability for all New Yorkers if knowledgeable people don’t speak up to stop it!.]

The Climate Leadership and Community Protection Act (Climate Act) has a legal mandate for New York State greenhouse gas emissions to meet the ambitious net-zero goal by 2050.  This post documents the verbal comments I submitted at the Syracuse Draft Scoping Plan Public Hearing on April 26.  Public comments are limited to two minutes so I could only make points without providing any context.  The verbal comments reference written comments submitted on April 22.

Everyone wants to do right by the environment to the extent that they can afford to and not be unduly burdened by the effects of environmental policies.  I have written extensively on implementation of New York’s response to climate change because I believe the ambitions for a zero-emissions economy embodied in the Climate Act outstrip available renewable technology such that it will adversely affect reliability, impact affordability, risk safety, affect lifestyles, and will have worse impacts on the environment than the purported effects of climate change in New York.

New York’s Greenhouse Gas (GHG) emissions are less than one half one percent of global emissionsand since 1990 global GHG emissions have increased by more than one half a percent per year.  Moreover, the reductions cannot measurably affect global warming when implemented.

The opinions expressed in this post do not reflect the position of any of my previous employers or any other company I have been associated with, these comments are mine alone. 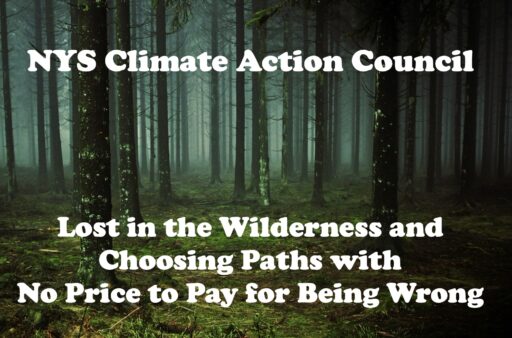 The Climate Act establishes a “Net Zero” target by 2050. The Climate Action Council is responsible for preparing the Scoping Plan that will “achieve the State’s bold clean energy and climate agenda”.  They were assisted by Advisory Panels who developed and presented strategies to the meet the goals to the Council.

Those strategies were used to develop the integration analysisprepared by the New York State Energy Research and Development Authority (NYSERDA) and its consultants that quantified the impact of the strategies.  That analysis was used to develop the Draft Scoping Plan that was released for public comment on December 30, 2021. Comments on the draft can be submitted until June 10, 2022.  In addition to written comments the Council accepts verbal comments at a series of ten public hearing.  This post documents the verbal comments I submitted on April 26, 2022 in Syracuse.

The written comments submitted on April 22 that was the basis of the verbal comments listed the presentation comments and provided detailed documentation for the statements.  If this blog post spurs your interest, then I encourage you to check out the written comments. I spent a lot of time on that report.  The text includes internal links to the relevant documentation so that you can check details for the verbal comments more easily.

In the introduction I referenced my written comments so that I could dispense with any background information.  I have always worried that most New Yorkers have no clue what is included in the Draft Scoping Plan and given the lack of documentation I doubt that most Council members fully understand the implications either.

I am going to summarize the written comments I submitted on April 22 to the Council.  I don’t think the Council, much less the public, appreciates the Draft Scoping Plan’s claimed benefits, costs, threats to reliability, or effect of the proposed reductions on global climate change.

At this time there are over 190 articles about the Climate Act on this blog.  Consequently, the verbal and written comments cover material already presented here.  The discussion of the benefits was mostly based on a post in January.

The scoping plan claims that “The cost of inaction exceeds the cost of action by more than $90 billion”.   That statement is inaccurate and misleading. The plan claims $235 billion societal benefits for avoided greenhouse gas emissions.  I estimate those benefits should only be $60 billion.  The Scoping Plan gets the higher benefit by counting benefits multiple times.  If I lost 10 pounds five years ago, I cannot say I lost 50 pounds but that is what the plan says.

One point in favor of checking the written comments is that some aspects of points made in the blog posts have been refined since the original post.  A month ago I caught on to cost calculation trick that includes massive implementation costs in the Reference Case and then presents the costs benefits relative to the Reference Case.  As shown in the written comments, the Draft Scoping Plan not only excludes costs but at the same time includes benefits for those control measures.

The cost estimates are poorly documented but I have determined that they misleadingly exclude the costs in the transportation investments category needed to make the necessary reductions. The semantic justification is that the program is already implemented.  Adding $700 billion for that and using the correct avoided cost of carbon means that costs are at least $760 billion more than the benefits.

Reliability will be risky. When buildings are 100% electric and transportation rely on electric vehicles, what happens when there is an ice storm?  There are many similar “what if” scenarios not considered.

The supposed rationale for the Climate Act is to do something about climate change.  The reality is that if New York’s emissions and economy are considered in context relative to the other countries this is an exercise in futility.

In the conclusion I brought up the concept that it seems pretty obvious that the schedule should be based on technological feasibility.  Last November I wrote that the first principle of electric energy planning should be to not endanger reliability and if there are warning signs the plans should be re-examined.

Anything we do will be displaced in a year, cost a lot of money and risk catastrophic blackouts.  The plan must be revised to one based on technically achievable incremental steps that maintain current standards of affordability and reliability.

Unfortunately, I believe that the Climate Action Council is simply going through the motions of the public comment process.  The Albany mindset is so fixated on the nobility of their quest that I am not sure what kind of reality slap would be needed to knock some sense into the process.  As it stands now the Climate Act will do far more harm than good.  I would like to think that when my public comment directly contradicts the overview presented at the public hearings (the costs are far higher than the benefits), that some members of the Council would take a look at my written comments to see why I am saying that.  I have my doubts.

My written comments concluded that the Climate Action Council should focus its efforts on developing acceptability criteria for the implementation schedule instead of discussing specific components of the plan related to the personal interests and agendas of its members.  In order to address reliability, the Council has to start listening to the organizations responsible for New York grid reliability.  Thomas Sowell said “It is hard to imagine a more stupid or more dangerous way of making decisions than by putting those decisions in the hands of people who pay no price for being wrong”. That is exactly what the Climate Action Council will be doing if they do not listen to the experts.