[Editor’s Note: Climate change elitists are pushing a grand scheme to steal trillions from the public for green eggs and scam and we are losing our liberty because of them.]

Oil giant ExxonMobil’s 12-member board of directors reportedly has two new members who are climate activists backed by investor “Engine 1.”

Under the headline, “Shareholders tell Exxon to eat sh*t,” G/O Media and Earther “reporter” Molly Taft gleefully ends paragraph 1 with, “Don’t let the door hit you on the way out!?” The widely read journalist explained that “The bigger boys in the room [notably financial giant BlackRock] decided to play along,” prompting “panicked” Exxon officials to pause voting, but only after two of the four Engine 1 candidates (of the three endorsed by BlackRock) had been voted onto the board. “Too bad, guys,” Taft gloated.

In truth, the battle to alter ExxonMobil was over before the latest skirmish began. Taft herself reported that Exxon had promised to add “other more climate friendly directors” to its board in an effort to appease a few noisy investors.

Two weeks earlier, Canadian activist Seth Klein had declared it was “time to stop playing nice with fossil fuel companies,” which in his mind are “villains” who “outright lied for decades about the truth of climate change” and work tirelessly to “delay and divert the need for climate action.” The fossil fuel industry, said Klein, “in pursuit of its financial self-interest and preservation, has become expert at preying on our fears, misgivings and desires.”

Preying on our fears? You would think we are trapped in a burning building, or about to be eaten by Godzilla, when this entire climate pandemic is driven by a desire to shave maybe half a degree Fahrenheit off forthcoming world temperatures – based on computer model predictions that are already way above what has been measured by satellites operating in the real world!

But in the same week that once-proud ExxonMobil raised the white flag of surrender to climate mythologists, 61% of Chevron Corp. investors backed a radical proposal to force customers to reduce their “emissions” of carbon dioxide. Chevron investors barely blocked a demand that Chevron report on how significant reductions in fossil fuel demand would affect its business at a time when fossil fuel demand is rising!

On the same day, a Dutch court ordered Royal Dutch Shell to slash its “emissions” by 43% by 2030. Earlier, 30% of Shell’s investors had voted to adopt a more ambitious climate (decarbonization) plan put forward by Follow This, a campaign group that also targeted BP and the French oil company Total.

This may appear to be a war on big oil and gas, but in reality the war is against citizens who cherish their vehicles, appliances, jobs, living standards and freedoms. Few of the loudest mouths of the “green” movement have altered their lavish lifestyles, yet the super rich cannot abide “irredeemable, deplorable,” ordinary people enjoying a drive in the country, a warm home in the winter or a flight off on vacation.

Climate elitists are influencing boardrooms not only in big oil but also in big finance and big insurance. In 2019, the European Investment Bank (EIB) announced it would cease financing fossil fuels projects at the end of 2021. In 2020, major U.S. banks joined forces in refusing to finance oil and gas drilling in the tiny portion of the Arctic National Wildlife Refuge that President Trump had opened to drilling. 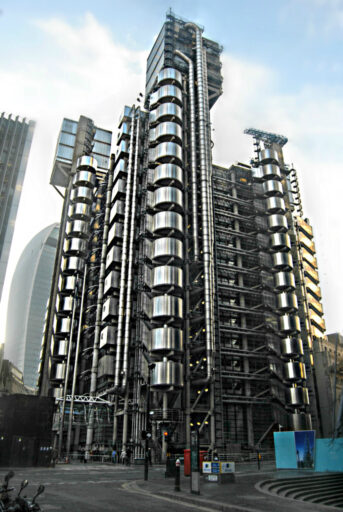 Lloyd’s of London headquarters…as ugly on the inside as the outside, today’s version of the ivory tower and politically corrupt, like almost every other elite institution today.

Also in 2020, Lloyd’s of London announced a decision to stop providing insurance to fossil fuel companies by 2030. As Property Claim Services strategist Tom Johansmeyer explained, “Insurers and reinsurers around the world are grappling with issues related to both climate change and the impact of energy transition on their portfolios. Some have made the same commitment that Lloyd’s did, and others are likely to follow.”

Now the International Energy Agency has “demanded” an immediate end to oil and gas exploration – period! Otherwise, these elitists predict a worldwide disaster over “our” failure to limit global temperature’s increase to a maximum 1.5o C by 2050.  Not to be outdone, COP26 President-designate Alok Sharma has called for an end to international coal financing. In Sharma’s view, “The days of coal providing the cheapest form of power are in the past, and in the past they must remain.”

As Future Proof founder and editor Tim de Chant sees it, “If global leaders started following the [IEA] report’s recommendations tomorrow, the most significant – and immediate – impact would be the cessation of all new fossil fuel projects starting next year. Countries could continue extracting the oil, gas and coal they’re currently exploiting, but they shouldn’t authorize any new exploration, drilling or mining.”

Another report asserts the world is already too hot to support human life. Scientific American’s Andrea Thompson makes the absurd claim that, “Even in the abundantly air-conditioned U.S., heat currently kills more people than cold, floods or hurricanes.” Bunk. USA Today reported in 2015 that cold kills nearly 20 times more people worldwide as heat, and that, even in the USA cold kills more than twice as many as heat.

Meanwhile, Molly Taft reports, Russia’s national oil company Rosneft has begun a massive project in the Arctic that officials say will produce 25 million tons of oil annually by 2024. Taft describes the project as “dauntingly huge,” as Rosneft anticipates exporting 115 million tons of oil a year by 2030 by building 15 entirely new towns for an anticipated 400,000 employees.

Is it her own “blindness-inducing rage” she feels by adding that “Rosneft has said that oil produced from the Vostok project is ‘environmentally friendly’” because the company plans to power its extraction “with wind turbines”?

What do ordinary people think of these grandiose plans – all made “in their best interest” by the enlightened? Britons are less than enthusiastic about a government mandate to replace natural gas home heating units with heat pumps at a cost of up to US$50,000 per home. Only a few Americans have invested in electric vehicles, and 20% of them bought an internal combustion engine vehicle after turning in their EV – despite the outright bribery (huge subsidies) to “encourage” EV usage.

Noting the high price and low environmental benefits of today’s EVs, Vauxhall CEO Carlos Tavares scoffed at planners hell-bent on eliminating the internal combustion engine. “I can’t imagine a democratic society where there is no freedom of mobility because it’s only for wealthy people, and all the others will use public transport.” Personal mobility, Vauxhall argued, “should be seen as a fundamental right.”

World leaders clearly know human rights interfere with their utopian plans. Without major pushback against these draconian mandates, planners will have little trouble extending their control over just about everyone. It is a small step from banning, or simply refusing to finance or insure, fossil fuel exploration and production and new car manufacturing – to banning, or refusing to finance or insure, individual purchases of just about anything elites decide we should not have. And they’re already doing it.

Just as they lied for a year about the origins of and treatment for the “COVID-19” corona virus “for our own good,” their claims of coming catastrophes from “climate change” (no longer global warming) ring hollow. All their solutions increase their power and wealth at our expense. But we are expected to “eat our broccoli” and accept pandemic plagues while they dine at The French Laundry and fly to climate conferences in private jets.

Who the hell do they think they are? And why are we putting up with their angry, ignorant, offensive demands? Have we all just become spineless worms?

Did it all start with global cooling/warming/climate-change? With the anti-nuke movement? Who came up with all this mish-mash of demands, from cancel culture to climate calamity to Antifa, critical race theory and anti-racism? How have we become enslaved by the spiteful?

Editor’s Note: Why are elites selling us out? Because there are trillions at stake; trillions to be had by milking ratepayers and taxpayers in the name of fighting the ginned up climate change war. This is why the Exxon-Mobil, Royal Dutch Shell, et al strategy of appeasement was doomed to failure. No amount of appeasement will satisfy a Godzilla determined to rob the public. Moreover, it is the elites and not the climate activists who are the enemy; the latter being but pawns in the chess game. Only a determined offense will work and that’s what I like about Duggan’s harsh but exceedingly fair article.