Climate Change Is All About the Money, But for Whom?

Climate Change Is All About the Money, But for Whom?

[Editor’s Note: Climate change has been a humongous scam to reward wealthy grifters with but phony promises of money for underdeveloped nations. Is the scheme is falling apart?]

The UN’s annual climate change global negotiating festival — in this case COP27 in Egypt — is less than a month away. This one could be a real hoot to watch because there is only one big issue left on the table and that is money.

Lots of money, many trillions by the wishes, all flowing from the developed world to the “developing” world. (Since the so-called developing world still includes the super economy of China the word has lost all meaning.)

The money hopes are spectacular but also hopeless, hence the show. How this immense absurdity will emerge during the lucky 13 days of negotiations between the rich countries and the we-want-your-riches countries should be fun to watch. 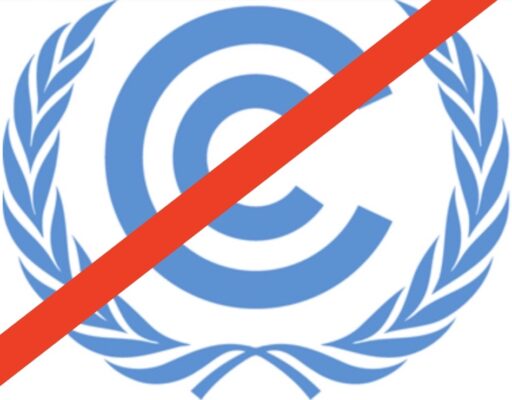 The UN Climate Change logo with an appropriate modification

Here is a simple scorecard so you can follow the action. First and foremost the code word is “finance.” This is not foreign aid and you will never hear that term used. The deliberately vague understanding is that the developed countries caused the climate crisis so they are obligated to somehow help the developing countries deal with it.

Finance means more than just money; it means flows of money, endless flows as far as that goes. None has an end that I know of. There are three big flows, called “mitigation,” “adaptation” and “loss and damage.”

Mitigation refers to reducing or eliminating a country’s causal contribution to climate change, which often means cutting emissions, but not always. Soaking up CO2 is also mitigation, as with reforestation or certain agricultural practices.

The mitigation flow is well calibrated. It was supposed to be $100 billion a year starting in 2020. Of course that did not happen in 2020, has not happed since and will never happen. The OCED did cook the books to say that around $80 billion is flowing but most of that is loans, which the developing countries insist do not count. Look for lots of anger and name calling here.

In addition to not happening, this size flow was just for the first 5 year plan (sound familiar?) so the flow amount starting 2025 is big on the table. The developing countries, led by the Africans, have said they want a whopping trillion a year. Laughable but real so watch for it. Host Egypt says they speak for Africa so this game might get a lot of play.

What is likely not on the table is new mitigation action target pledges. In fact Egypt has never made one under the Paris Accord. This leaves lots of room for negotiating FINANCE, or trying to. Note that most developing country mitigation promises are contingent on this huge flow, so in a sense the whole climate game is on the table. No money, no action.

Adaptation is a relatively new flow and to date almost no money has moved. The developing countries love it because it mostly means building stuff, especially without those painful lifestyle changes that mitigation often implies. Irrigation systems for droughts, dams for floods, that sort of big ticket projects. There is even a move to divert up to half of the mitigation flow into the adaptation stream.

Loss and damage is the 9,000 pound gorilla. It means America and the rest of the developed countries will compensate the developing countries for all the bad things climate change does to them. Loss refers to things that cannot be fixed, like death or a destroyed crop, while damage is stuff that can be rebuilt, like a flattened town.

Since all bad weather is now attributed to climate change we would be paying for all of it. I am not making this up. Coverage includes short term events like hurricanes or floods, plus slow stuff like droughts. Non-weather events like pestilence, pandemics and wildfires are probably also included.

Suddenly, the laughably long lists of all the bad things caused by climate change take on new, potentially costly, meaning. Under the Paris Accord the developing countries are supposed to each be adding up their annual losses and damages. No doubt these will sum to many trillions of dollars a year.

None of this stupendous (ruinous?) money flow is ever going to happen. This was true before the present global economic turmoil but it is now too obvious to hide. Especially amusing is that the U.S. congressional elections occur at the beginning of COP27. If the Republicans take even one house then the Finance Game is truly dead for now.

Prepare to enjoy the show, beginning with how the left wing media report what amounts to the end of the money road. I do not expect the talks to collapse because where there is talk there is still hope. That the hope is hopeless will not change that fact, but it does make a fun game to watch, if you know what to watch for.

Stay tuned to CFACT for more coverage of the fateful COP27.