Climate change science is out. Climate change politics are in and based only on anecdotes providing excuses for politicians to appease special interests.

This post describes another evaluation of anecdotal evidence that is portrayed as evidence of global warming.  Previously I looked at a NPR radio segment in Great Lakes Vineyard Confronts Climate Change and examined a claim by a senior official at the Department of Environmental Conservation in Hay Harvest Climate Trend?.  This post addresses the frequency of snow storms in my home town. 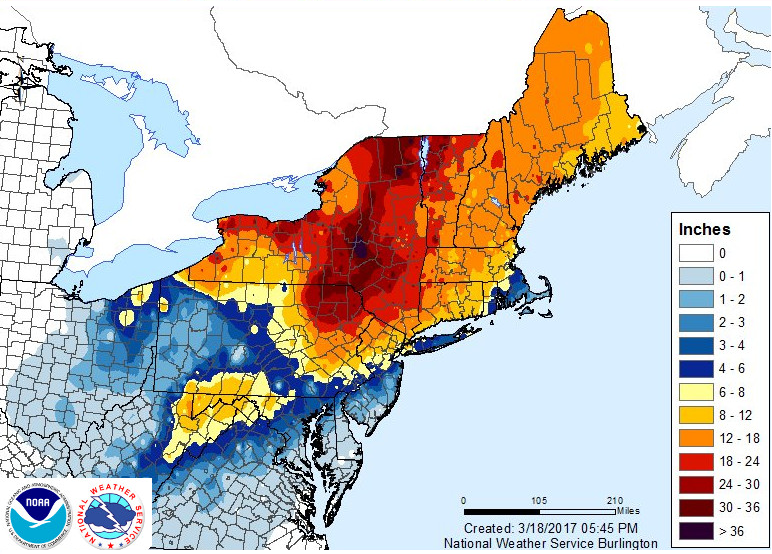 On the Facebook page “If you grew up” for my Oneonta, NY hometown group someone posted a conversation starter about the Old Farmer’s Almanac forecast for this winter.  This is the post that got me started:

“The winters we had when we are young are gone. It’s rare when we get a major storm. Amazing how much it has changed in 50 years – but people still deny the blatantly obvious.”

“If you look at the data rather than rely on anecdotal information and your memory (when I was a kid the snow came up to my waist all the time), then you will find that no one is ignoring the blatantly obvious. See for example: reference and reference”

That prompted this response:

“The source you cite is suspect at best. Reference”

I responded to that with this:

“My advice is to not trust anybody on any aspect of the global warming problem or purported solution.  Check out the numbers and data yourself.  The posts I referenced showed where they got their data and their data show that there is no “blatantly obvious” snowfall trend. Despite the “suspect” web site I stand by that position.”

That prompted this response:

“You are welcome to your opinions and to selectively choose which data you want to use, but opinions are just that. Some people also firmly believe that vaccines are horrible based on one dubious study that has been disproved, others believe the world is flat. The issue is that the climate is changing faster than it normally would due to man’s activity – some areas are getting dryer, others wetter, overall the temperature is rising but in some areas it will get colder. To dismiss the vast majority (@97%) of trained scientists and the blatantly obvious evidence in favor of the very loud deniers doesn’t make the 3%’s points valid. Reference”

“I said check the numbers and data yourself.  In this instance all I am saying is that don’t confuse weather and climate.  Just because it some observed weather phenomenon is different does not necessarily mean it is related to global warming.

When you combine saying that climate is changing faster than normal due to man’s activity with the suggestion that disagreeing dismisses the vast majority of trained scientists, it is misleading based on my check of the claim and survey.  I think trying to determine the rate of climate change and figure out how much of the observed climate change is due to mankind is too difficult to be conclusive.  I have not found any survey that asked the policy relevant question about the rate of change and man’s actitivity.  Instead they basically asked whether there was a greenhouse effect.

I also said don’t trust anyone.  Search on 97% climate scientist myth and then search to find the other side of the story then decide for yourself.  Trying to do a similar comparison for the rate of climate change and contribution of mankind is more difficult so I don’t think you can do something similar easily.  Although I think I can offer a trained scientist opinion don’t trust me even though I have two degrees in meteorology, certification as a consulting meteorologist and over 40 years experience.”

First, let’s define weather and climate.  According to the National Oceanic and Atmospheric Administration’s National Ocean Service “Weather reflects short-term conditions of the atmosphere while climate is the average daily weather for an extended period of time at a certain location.”  The referenced article goes on to explain “Climate is what you expect, weather is what you get.”

The Northeast Regional Climate Center data sets provide processed values for temperature and precipitation for many observing sites in New York.  If global warming is affecting the winter storm climatology then there should be trends in either or both the daily snowfall or snowfall accumulation data.  In a previous analysis of weather vs. climate perception I analyzed data from Ithaca, NY which is just about 90 miles away from Oneonta. Because it was readily available and I think representative of snowstorms in Oneonta, I just used the data from that site for daily snowfall and snowfall depth.  I also said trust no one so if anyone wants the data I can provide that for your own analysis.

I did a simple analysis of the daily snowfall and snowfall accumulation.  In both cases, I fit a linear regression model to describe the relationship between the daily values and time for the months November, December, January, February, and March. I use Statgraphics Centurion software from StatPoint Technologies, Inc. to do my statistical analyses because it enables the user to choose the best relationship from 27 different linear regression equations.  I determine which linear regression model provides the best fit and then use that model to describe the data. If the calculated probability value (P-value) is less than 0.05, there is a statistically significant relationship at the 95.0% confidence level and I defined the test result as significant.

The purpose of this analysis was to determine if the frequency of major snowstorms in Central New York has changed due to climate change.  In this analysis I looked at climatic changes over the period of record from Ithaca and calculated the trend over the entire period for daily snowfall amounts and daily snowfall depth.  The Ithaca, NY Daily Snowfall Depth December 1899 through March 2019 figure shows quite a bit of variation.

So why is there an impression that it is rare that Oneonta no longer gets major storms?  In the Ithaca, NY Extreme Daily Snow Depth and Snowfall (inches)table note that if the winters when you were young were around 1960 there were a couple of years when the snow depth was over 24” out of six in over 100 years.  Similarly, if your youth was in 1971 and 1972 there were two storms with snow over 16” out of the eight storms in over 100 years.  No question that would give the impression that the winters were different in your youth.

Another important point to keep in mind is that you could change the results by picking a different starting point for the analysis.  I also suspect that you could get different results by screening the data differently.  The choices I made were the simplest.  One you start tweaking input assumptions you can be rightfully accused of statistical manipulation.

These data illustrate the point I tried to make in the Facebook posts.  In my experience, whenever I have looked at the data behind a climate change related claim it was more complicated, more uncertain, and often contradictory to the claim made.   It is also difficult to separate whether the observed phenomenon is just weather variability or climate trend.

This post does not prove that there isn’t climate change, that mankind is not having an effect on climate, or that it isn’t appropriate to do something. If this were just a simple scientific disagreement it could be shrugged off as inconsequential.

Unfortunately, in New York State this kind of anecdotal evidence has been used to justify last summer’s Climate Leadership and Community Protection Act (CLCPA) which has been described as the most ambitious and comprehensive climate and clean energy legislation in the country when Cuomo signed the legislation.  The Citizens Budget Commission developed an overview of the CLCPA targets in Green in Perspective: 6 Facts to Help New Yorkers Understand the Climate Leadership and Community Protection Act. Look at those references to get a feel for what is in store for New York.

I have spent a lot of time trying to figure out what this law could mean.  For example, my latest estimate for the cost for the energy storage batteries needed when winds are light at night during the winter is $176.3 billion through 2050.  The United Kingdom has similar legislation in place and it was recently announced that their plan would require conversion of all gas central heating to electric.  I expect no less here.  As a result when I see anecdotal information used to justify these costly programs I have to respond.