In a couple of weeks, the comment period closes for the Draft Scoping Plan that outlines how New York is to achieve its Climate Leadership and Community Protection Act net zero ambitions. Despite the fact that any rational observer can only conclude that there is no real plan for a reliable electric system and the Plan provides very little cost information, environmental advocates have convinced the most progressive of the State’s legislators that it is not enough.

On May 26 Assemblyman Jeffrey Dinowitz, Chair of the Assembly Codes Committee, and State Senator Liz Krueger, Chair of the Senate Finance Committee, along with environmental advocates and experts, announced the introduction of the Climate Change Superfund Act (S.9417). In brief, it codifies the litigation against fossil fuel companies as a cash cow for adaptation programs. 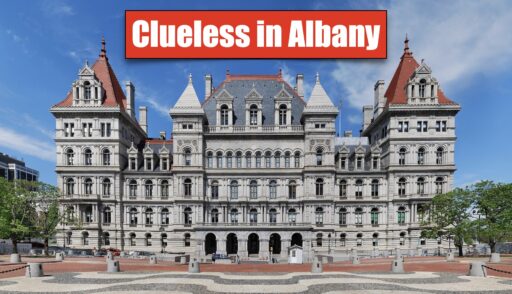 In light of the billions of dollars in damages that New York State has suffered as a result of climate change, and the tens of billions more to come in future decades, this first-in-the-nation legislation will use the polluter-pays model exemplified by existing federal and state superfund laws to collect $30 billion over ten years for climate change adaptation from the parties most responsible for causing the climate crisis – fossil fuel companies.

Right now consumers are facing pain at the pump as well as in their gas and electric bills. At the same time, the oil and gas industry is raking in enormous profits.The Climate Change Superfund Act will claw back some of the oil and gas industry’s recent windfall profits and use them for adaptation costs that would otherwise be charged to state taxpayers. The program is designed to prevent such costs from being passed on to consumers.

“The climate crisis is here, right now, and it’s already causing billions of dollars in damage and a growing death toll in New York State,” said Senator Krueger. “We must begin to make the investments necessary not only to mitigate future climate change, but to adapt to and defend ourselves from the damage that’s already been done. The cost of inaction is inconceivable – in money, in lives, and in countless other ways. Nonetheless, there will be a large price-tag to the work we have to do, and it’s only fair that the companies who made the mess should pay for cleaning it up. The Climate Change Superfund Act is one critical piece of the puzzle of funding our state’s response to the climate emergency.”

“The damage done to our climate and to our communities from decades of corporate disregard for scientific evidence is irreparable and omnipresent,” said Assemblyman Dinowitz. “As we continue to take big steps towards a green future in order to mitigate the worst potential impacts from climate change, the Climate Change Superfund Act would be a vital resource to invest in adaptive and resilient infrastructure, and it is common sense to charge those who did the most damage to our climate for the costs of keeping people alive amidst our new climate reality.”

Unfortunately, their rationale uses the same line of reasoning that was used to pass the Climate Act.  Because “everybody” knows that climate change causes unusual weather and the climate and weather illiterate think anecdotes prove their case, they actually believe that New York has suffered billions in damages from climate change and not just weather.

Climate change, resulting primarily from the combustion of fossil  6 fuels, is an immediate, grave threat to the state’s communities, environment, and economy. In addition to mitigating the further buildup of greenhouse gases, the state must take action to adapt to certain consequences of climate change that are irreversible, including rising sea levels, increasing temperatures, extreme weather events, flooding, heat waves, toxic algal blooms and other climate-change-driven threats.  Maintaining New York’s quality of life into the future, particularly for young people, who will experience greater impacts from climate change over their lifetimes, will be one of the state’s greatest challenges over the next three decades. Meeting that challenge will require a shared commitment of purpose and huge investments in new or upgraded infrastructure.

It is a holiday weekend and I have other things to do than to try to make sense of the implementation language in the proposed legislation.  If ever get to the point where I can stomach looking into the plan, I will try to figure out how they account for the fact that New York’s total GHG emissions are less than half a percent of total global emissions.  What share of global emissions is accountable for New York’s alleged problems?   Shouldn’t that be somehow a function of New York emissions?  I suspect the innumeracy of the authors of the legislation affects the plans and upon closer inspection will undermine the whole thing.

My impression skimming through the legislation is that this applies to fossil fuel production.  Ronald Stein recently pointed out that the primary usage of crude oil is “to manufacture derivatives and fuels which are the ingredients of everything needed by economies and lifestyles to exist and prosper”.  If I am right that this legislation covers fossil fuel production then how do they hope to address that aspect without unduly impacting consumers?

One last point.  In another outstanding example of cluelessness, the underlying argument that the primary reason fuel prices have gone up is because the evil oil companies are making windfall profits.  Somehow these energy market experts have convinced themselves that if this monstrosity ever gets enacted and withstands the inevitable lawsuits that the fossil fuel producers won’t simply pass the costs on to consumers.  They say they are going to prevent that, but aside from yet another magical solution, I cannot imagine how that could ever work in favor of the consumer.  At the same time these same politicians have enacted a holiday on fuel taxes because costs are too high.

This article was originally posted at Watts Up With That