Climate Corporatists and Totalitarians Want to Shut Us Down!

Climate Corporatists and Totalitarians Want to Shut Us Down!

The climate cult consists of corporatists and ideological totalitarians now trying to shut down any dissent over their raid on the treasury and halls of power.

Political correctness has oozed into every corner of civil society today. It has, in fact, metastasized into a deadly cancer that, if not cured, will leave us with a totalitarian world governed solely by elites out to gorge themselves on the fruits of our labors while accumulating ever more control over us.

Things took a dangerous turn during COVID as hucksters from Fauci to Big Pharma got Big Tech to shut down all debate, as their allies grabbed previously unimaginable and immense power over us. Then, there was the 2020 election and what Stacey Abrams claimed for four years was no longer allowed to said, as it was Trump saying it this time.

And, now the bell tolls for us; those of us challenging climate orthodoxy and willing to say it’s not science, or even ideology really, but, rather, pure corporatism that is behind so much of the climate hustle. 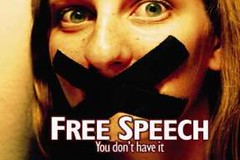 Our climate is not in crisis. That much was established by Obama administration official Steve Koonin in his wonderful book, “Unsettled.” The purveyors of doom continue to insist there is a climate emergency, though, because everything they value demands it. By that I mean money and power, the two primary addictions that result from pride, the original sin.

The money sought is green rent to be paid by utility customers and taxpayers as subsidies to solar, wind and other uneconomical “green energy.”

The power sought is that of elites such as Klaus Schwab, Bill Gates and the like to number the hairs on our heads, control what we eat, drink and think and direct our every activity right down to our right to live. Climate has that allure. If you imagine you can control the very heavens and make them rain gold coins and crowns, there is no resisting the attempt.

First, though, it is crucial to crush all other resistance. That’s how totalitarianism works, as we all know. So, we have the Biden folks, who are wholly under the spell of the climate cultists to the point they are committing seppuku to demonstrate their fealty to the cause. Here is Gina McCarthy, EPA head under Obama and how Biden’s climate advisor:

A few years ago, Facebook enlisted third-party “fact checkers” to review news stories about climate. That didn’t satisfy Democratic Senators who howled about a “loophole” for opinion pieces. Facebook then began appending fact-checks to op-eds, including by [Wall Street Journal] contributors Bjorn Lomborg and Steven Koonin, that criticized apocalyptic climate models and studies. The goal was to restrict readership.

Now progressives are moving to censorship phase two, which is shutting down debate over climate “solutions.” “Now it’s not so much denying the problem,” Ms. McCarthy said in an Axios interview last Thursday. “What the industry is now doing is seeding doubt about the costs associated with [green energy] and whether they work or not.”

We’re apparently not allowed to state the obvious, that solar and wind are both hopelessly impossible without massive direct and indirect subsidies and, because they are not dispatchable, must also be backed up by fossil fuels or nuclear. This means there are huge duplicative system costs that aren’t even factored into “green energy” pricing that the cult falsely wants us to believe is competitive.

Nope. We cannot say that, according to Ms. McCarthy, and you can bet your last drop of gasoline, your last cubic foot of natural gas and your last watt of electricity that Facebook, Twitter, et al have been carefully instructed by the Biden battalions of buffoons to try to shut us down whenever we dare talk like that. Consider this, if you doubt me:

John Kerry, who is the U.S. special presidential envoy for climate, stated at a recent event at the University of Southern California that the country does not need to put more effort into drilling for oil and gas as energy costs continue to rise.

The most obvious sign of the increase in energy costs has been at gas stations, where the national average now stands at $5.01 per gallon, but utility bills are also expected to increase this summer. Republicans in Congress have called for more domestic production to increase the supply of oil in order to reduce the cost.

“And energy security worry is driving a lot of the thoughts now about, ‘Oh, we need more drilling, we need more drilling of this, we need to go back to coal.’ No, we don’t. We absolutely don’t. And we have to prevent a false narrative from entering into this or, again, pun intended, we are cooked,” Kerry said.

And, that’s not all. Our guest blogger, Roger Caiazza, notes how “misinformation” has become the standard refrain for climate cultists who just won’t accept the fact anyone might disagree or have a better grasp of the facts than themselves:

Another theme concerned negative comments.  For example, Co-Chair of the Council Basil Seggos, Commissioner, New York State Department of Environmental Conservation … brought up the subject of public engagement.  He admitted that when they got out into public that they gained a better appreciation of the scale of the challenge.  He said it was tough to communicate the challenges and went on to say there is lots of “misinformation and misunderstanding but also lots of excitement and support.”  Raya Salter, Lead Policy Organizer, NY Renews (speaking at 37:27 of the recording) claimed that there are two lobbying groups: paid advocacy community and the paid misinformation community.  She said there were well-funded efforts to spread the misinformation and that there is no voice challenging it.

My perception of these comments is that they both believe that anyone who disagrees is wrong and must be shut up because they are all paid shills of the evil fossil fuel industry.

Paul Shepson, Dean, School of Marine and Atmospheric Sciences at Stony Brook University (starting at 22:05 of the recording) picked up on the misunderstanding and misinformation label in his comments. He was the first to disparage the speakers who were worried about loss of livelihood.

He said that they were misinformed because they apparently think that job impacts would be immediate.  He went on to say that the transition will be gradual, giving lots of people lots of time to adjust, re-train and so on.

His attitude is personally disappointing to me.  The fact is that they will have plenty of time to change their careers.  No appreciation that changing careers means starting over, very likely in a job that will never pay as well as they are paid now.  For an academic shielded from job security issues through tenure for much of his career to dismiss their concerns as a misunderstanding is tone-deaf and insulting.

Robert Howarth, Professor, Ecology and Environmental Biology at Cornell (starting at 32:52 of the recording) said that another area for misinformation is heating electrification using heat pumps. He has one and loses no opportunity to say that heat pumps work in cold climates because his does.  He said that “Anyone who says otherwise is just misinforming.”  He went on to say that there are forces out there that are working to counter our messages with misinformation…

Dr. Howarth may be right when he says that the technology to make it work is available but I have never heard him mention building shell upgrades are required.  Furthermore, no one associated with the Climate Act has ever admitted that the cost savings from the efficiency improvements for the heat pump and building shell improvements are not enough to offset the conversion costs for a natural gas fired home, see for example this research.  There are savings for propane and fuel oil but not natural gas.

Robert Howarth … (starting at 32:52 of the recording) picked up on that theme.  He said that fear and confusion is based on misinformation but we have information to counter that and help ease the fears.  He stated that he thought reliability is one of those issues: “Clearly one can run a 100% renewable grid with reliability”.

I was so taken aback by Shepson’s comment that I dashed off an email to him.  (Not surprisingly he never responded.)  I called his attention to one of my recent posts.  He dismissed the difficulties of a transition to a renewable resource but the fact is that the Council has not listened to the reliability experts at the New York Independent System Operator or the New York State Reliability Council.

My article highlighted two quotes from a recent NYISO presentation: “Significant uncertainty is related to cost / availability of Dispatchable Emissions Free Resource IDEFR) technologies, as well as regulatory definition of ‘zero-emissions’ compliant technologies” and “Some scenarios do not represent realistic system performance but are helpful in identifying directional impacts and sensitivity to key variables.”

That is as close as a technical report can come to saying this won’t work as you can get without actually saying it.  Furthermore, during the presentation discussion the point was made that the capacity projected numbers indicate an enormous amount of generation is needed to replace the shutdown of fossil-fired generation and implement the transition.

That result was described as just “stunning.” Someone asked whether anyone on the Council is looking at what this means.  These experts are clearly worried about the enormous resources that have to be built to meet to transition the New York electric grid to a net-zero.

Here are questions for these academics who consider themselves experts on the reliability of the zero-emissions electric grid.

Firstly, name a single jurisdiction that has successfully entirely converted their electric grid away from fossil fuels by using wind and solar renewables.

Secondly, name a single jurisdiction that has started the transition to an electric grid that relies on wind and solar that has not seen a marked increase in costs.

Roger gets it correct, as always, because he’s careful to examine the facts in as objective a fashion as he possibly can. Notice, though, how the climate cultists, in knowing or unknowing service to the corporatists and the totalitarians, resort to the “misinformation” tag. This is no accident. They want social media to grab ahold of it and shut us down so they might proceed apace to raid the treasury and storm the halls of power to issue a thousand edicts or whatever it takes to gag us.