[Editor’s Note: Roger studies the status of climate science in his home state, where politician Andrew Cuomo determines what is a climate emergency.]

In response to the Biden administration’s “World Climate Summit” there have been multiple summaries of the state of climate science, the alleged impacts and purported solutions. This post summarizes relative articles in the context of the Climate Leadership and Community Protection Act’s likely effect on the alleged effects of global warming.

I am a retired electric utility meteorologist with 40 years-experience analyzing the effects of meteorology and climate on electric operations in general and impacts on electric service in particular.  The opinions expressed in my comments do not reflect the position of any of my previous employers or any other company I have been associated with, these comments are mine alone.

These comments consist of two parts.  In the first part I calculated the potential impact on global warming if New York were to achieve complete elimination of all greenhouse gas emissions.  In the second part I summarize information contradicting the notion of an on-going climate emergency that is the rationale for the Climate Leadership and Community Protection Act (CLCPA) emission reductions.  These comments show that New York’s potential effect on global warming is too small to measure and the evidence is that there is no climate emergency.

These estimates are based on MAGICC: Model for the Assessment of Greenhouse-gas Induced Climate Change so they represent projected changes based on the Intergovernmental Panel on Climate Change estimates.  All I did in my calculation was to pro-rate the United States impacts by the ratio of New York inventory emissions divided by United States emissions to determine the effects of a complete cessation of all New York’s emissions.

There is a fundamental assumption in this approach.  The emissions in the primary reference are based on Intergovernmental Panel on Climate Change (IPCC) methodologies.  In order for these estimates to be correct the emission inventories used have to be calculated the same way.  New York’s CLCPA inventory only followed IPCC approaches when the results comported with the political narrative and differ when more “appropriate” that is to say higher numbers can be derived.  I am not sure how much of a difference New York’s mandated requirement to use a 20-year global warming potential for its emission inventory affects these results that use emissions with a 100-year global warming potential.

In light of that uncertainty, I developed results for multiple inventories.  The official CLCPA 1990 emission inventory was recently promulgated in New York’s Part 496 regulation.  As shown in the impacts table I estimated the benefits of getting 1990 emissions to zero for four inventories.  I evaluated the CLCPA Part 496 inventories for all the greenhouse gases (CO2, CH4, N2O, PFCs, HFCs and SF6) included in the law and just CO2.

In order to compare the potential effects the way the rest of the world prepares inventories, I evaluated the CO2 and GHG inventories from Table S-1 in the last New York State Energy Research and Development Authority inventory. The impact table shows that for the CLCPA Part 496 inventories there would be a reduction, or a “savings,” of between approximately 0.0097°C and 0.0081°C by the year 2100.  I compared those reductions to observed changes in the environment and relative to emissions in the rest of the world in an earlier post.

State of Science of a Climate Emergency

I base this section primarily on an article by Willis Eschenbach that lists many supposed reasons that there is a climate emergency.  He shows data that contradict many of those allegations.  For example, one rationale for a climate emergency is that there are increasing numbers of deaths from weather extremes but global deaths due to climate and weather-related events are decreasing a lot. 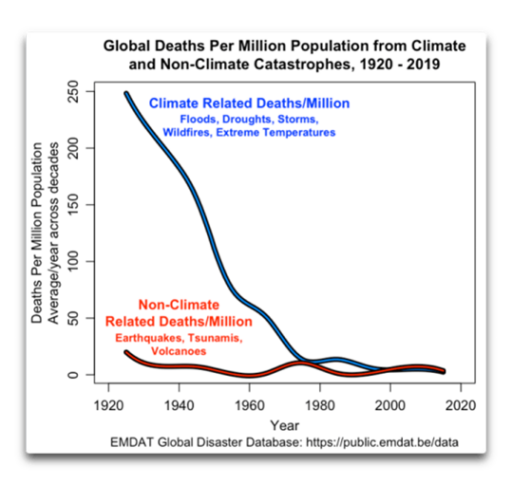 His post includes many figures that illustrate data that contradicts the political narrative.  Storminess has not gone up, and there’s been no increase in hurricane strength or frequency.  The Intergovernmental Panel on Climate Change (IPCC) says there’s only one chance in five (“low confidence”) that global droughts are increasing.  Nor have the “wet areas been getting wetter and the dry areas getting drier” because the scatterplot of rainfall trend shows no trend as shown below. 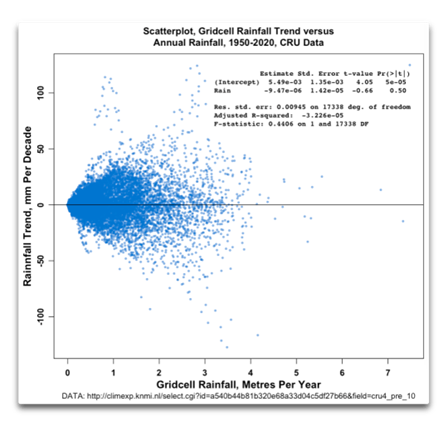 Eschenbach explains that alarmists keep posting scary-looking graphs of the loss of polar ice that show the total mass of ice loss but ignore the reality that those losses are tiny fractions of the total ice. He points out that tide gauges show no increase in the rate of sea-level rise, and the claimed acceleration in satellite-measured sea level is merely an artifact of changing satellites.

He uses Berkeley Earth land only temperature anomaly data to show that land temperatures have already risen more than the dreaded 2°C, with no cataclysmic consequences. 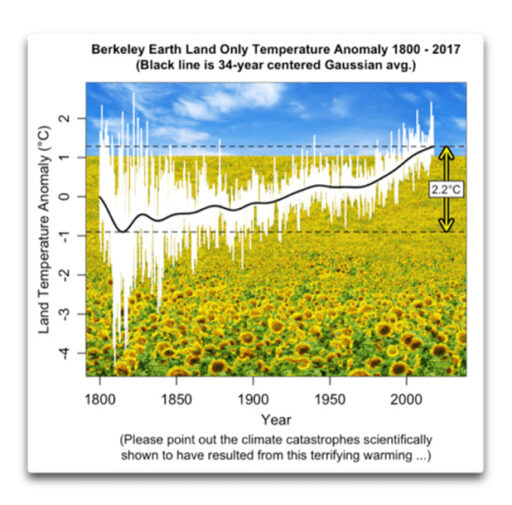 Another useful metric is to consider that the average temperature difference over the last two centuries is very small relative to temperature changes people know how to handle.  Lindzen plots the observed global warming against average temperature changes between 8:00 AM and 10:00 AM, sunrise to afternoon, winter to summer average, winter morning to summer afternoon, average coldest to warmest daily extremes, and all time coldest to hottest to show that people deal with far greater temperature changes than the observed changes on the order of several degrees that occurred during the time that human welfare increased the most in history or that allegedly in the future will create an emergency. 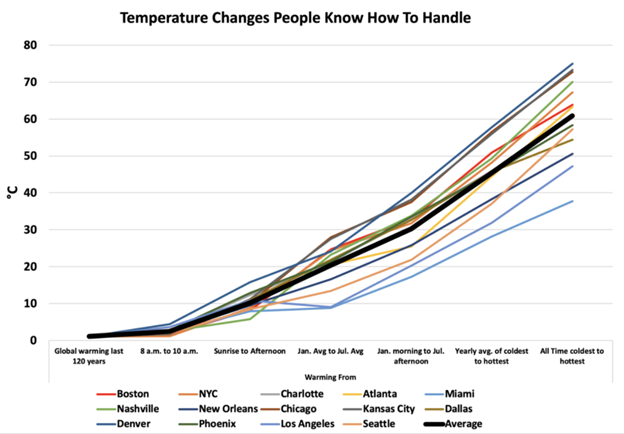 Eschenbach shows that climate models have routinely predicted far greater warming than has actually occurred.  He notes that “This should not surprise anyone—the intractability of climate predictions has long been recognized even by the IPCC, viz:

“In sum, a strategy must recognise what is possible. In climate research and modelling, we should recognise that we are dealing with a coupled non-linear chaotic system, and therefore that the long-term prediction of future climate states is not possible”

Rud Istavan recently described a series of failed climate predictions that further undermines any confidence in the climate models used to predict a climate emergency.  Climate models predict specific features in the tropics that are not observed.  Advocates claim that the ability of climate models to hindcast past anomalies proves that they can be used to predict the future.  However, he explains that the models are tuned to match the historical observations.  He explains that when looking at all the climate models used that in absolute temperature terms, the “models varied by ~4C in the year 2000 (early in their tuning period), from about the observed ~15.5C global average”.  Clearly that wide a range suggests poor model performance.  He also describes the model estimates of the amount of warming due to a doubling of CO2 concentrations in the atmosphere, the “equilibrium climate sensitivity”:

Models reliably predict an ‘Equilibrium Climate Sensitivity’ (ECS) of about 3C. Again half true. They all do, but not ‘reliably’. Observational ECS using energy budget (and other) methods consistently show about 1.6-1.7C, about half of modeled. This is a big deal, since all the alarmist doomstering depends on a high ECS (or its close cousin TCR). At 1.6, there is no climate problem at all. At 3, there might or might not be. The model/observation discrepancy is so great that AR5 declined to produce a central estimate of ECS, an embarrassing omission.

The climate emergency is supposed to be driven by changes to in downwelling radiation at the surface from the increase in CO2.  Downwelling radiation had a radiative forcing of 505.2 W/m2 for the pre-industrial (1750) atmospheric concentration of 278 ppmv of CO2. Currently the CO2 concentration is 413 ppmv and the forcing is 507.5 W/m2.  If CO2 is doubled from the 1750 value to 556 ppmv the total forcing will be 509 W/m2.  Doubling the atmospheric CO2 concentration results in just a 1-2% perturbation to the Earth’s energy budget. This doubled-CO2 effect has less than 1/5th of the impact that the net effect of clouds. And yet we are told there is a climate emergency because that change in one variable, CO2, is predominantly responsible for altering global temperatures.

Lindzen and Happer write that “No scientist familiar with radiation transfer denies that more carbon dioxide is likely to cause some surface warming”. However, they go on to argue that “the warming would be small and benign” and explain that civilizations have flourished when temperatures have been warm and declined when they have been cold.  Moreover, additional CO2 will increase the productivity of agriculture and forestry and those benefits are documented in many studies.

Advocates claim that climate models are somehow enough different than weather forecast models that our personal experience with failed weather forecasts beyond several days is inapplicable.  However, short-range climate models have poor forecasting abilities.  For example, The Weather Channel here not long ago issued it’s winter outlook up through March: 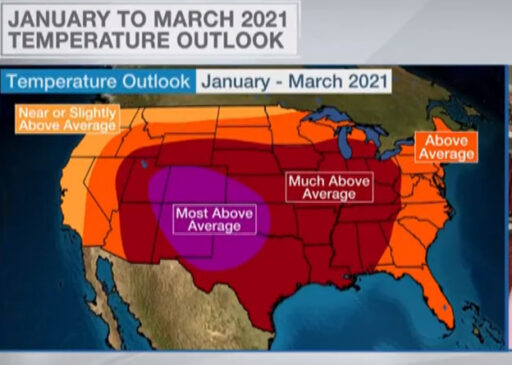 Obviously, there is an issue with this forecast given the Texas weather in February.  Even if the seasonal averages turned out to be similar to this forecast, the fact that so much damage occurred means that the expectation that average climate projections preclude extreme contrary weather is erroneous.

Dr William Briggs recently published “The Climate Blame Game: Are We Really Causing Extreme Weather?”  that looks at the claims of a climate emergency in a slightly different way.  In particular he analyzed whether we can trust climate-change event attribution studies.  His summary states:

Claims made in so-called climate change event attribution studies suffer from gross over-certainties and cannot be trusted. The techniques used in these studies are in their infancy and do not warrant the trust put into them. These studies assume either (a) perfect forecasting models, or (b) known, uncertainty-free causes of climate change. Neither condition holds. Because of this, attribution claims are far too certain or are wrong. They should not be used in any policy decisions.

New York climate change legislation and regulation invariably list a whole host of reasons why there is a climate emergency.  This summary of the state of the science shows that the basis for their attribution claims is not fit for purpose.  Eschenbach summarizes the climate emergency fallacy as follows:

Finally, an “emergency” is defined in the dictionary as “a serious, unexpected, and often dangerous situation requiring immediate action.” Alarmists have been warning us over and over about the purported impending “emergency” for 50 years, so it is hardly “unexpected.” None of their endless predictions of imminent tragedy have come true, and despite decades of warning, no significant “immediate action” has been taken … so by definition, it can’t be an emergency. For five decades, we’ve been told every year that we only have five, ten, or twenty years before disaster … I mean, seriously, how can people still believe these serial failed doomcasters?  So before we spend trillions of dollars on an unachievable plan to totally redo the entire global energy supply, how about we wait until someone can actually let us in on the big secret—just where is this mysterious “CLIMATE EMERGENCY!!!”, and when did it start?

I also showed that the global warming impacts projected with the climate models being used to claim a climate emergency are simply too small to be measured much less have an effect on any of the purported damages of greenhouse gas emissions.  In the context of global emissions New York’s efforts will be subsumed quickly by emissions increases in other countries that are morally obligated to provide the tangible benefits of affordable, abundant energy to their citizens.

The actions necessary to implement New York’s climate agenda have to be compared to the likelihood of climate change effects and potential for New York to change the purported impacts.  The rationale to make the changes does not stand up to scrutiny and the fact is that New York’s contribution to the alleged problem even if they were substantiated is so small to have any effect.  Advocates for the New York CLCPA have to be held accountable to these findings.