Climate Games Lead to More Coal Burned Than Ever for Power

Climate games pursued for power and money have led Western nations to chase expensive unreliables as the rest of the world burns more coal than ever for power!

Let that sink in. We are now burning more coal for power across the world than ever before in history. That’s where the climate games played by global elites have led us. And, they want more, as evidenced by their plans for the “Great Reset”and their “Build Back Better” and “Green New Deal” slogans. The climate games are about securing more power to make more money and making more money to secure more power.

Green eggs and scam are about building a utopian world of ruling elites, Plato’s guardians if you will, and serfs. The self-appointed masters of the universe from Facebook, Google, the World Economic Forum and eltist gentry class foundations see the climate games as the vehicle to get there. The Wu-Flu has served as a free tank of gas so they can get there quicker, to a world where the serfs own nothing, are subject to a social credit system like China’s (vaccine passports anyone?) and are assigned the task of producing the trillions to subsidize the whole thing. Meanwhile, everything the elites have preached is belied by one simple fact; we are burning more goal than ever, the precise opposite of what we were told the climate games were about.

If CO2 was the great global threat we have been lectured to no end about, natural gas was the obvious solution as it is the only thing to have produced measurable change in that regard, by being substituted for coal. But, the global elites and hedge-fund special interests with an interest in the green rent and power to be gained took llittle notice of those environmental gains. They largely ignored them, in fact, and quickly conjured new reasons to be against natural gas. Now, it was the methane; anything to put the emphasis back on the climate games and the need to rid the world of fossil fuels so green rent and green political power could flow again.

Europe, birthplace of all elitism, was, quite naturally, the first to follow the script with the failed Energiewende, consigning ordinary Europeans with the highest imaginable electric prices for little or no environmental gain. And, the buffonish corrupt Biden regime has upped the ante in the climate games by promising ever more green rent, ever more green power of the political variant and ever more corruption guaranteed to make deciples rich in both.

The climate games have now yielded the inevitable result and it’s apparent in this chart from the International Energy Agency: 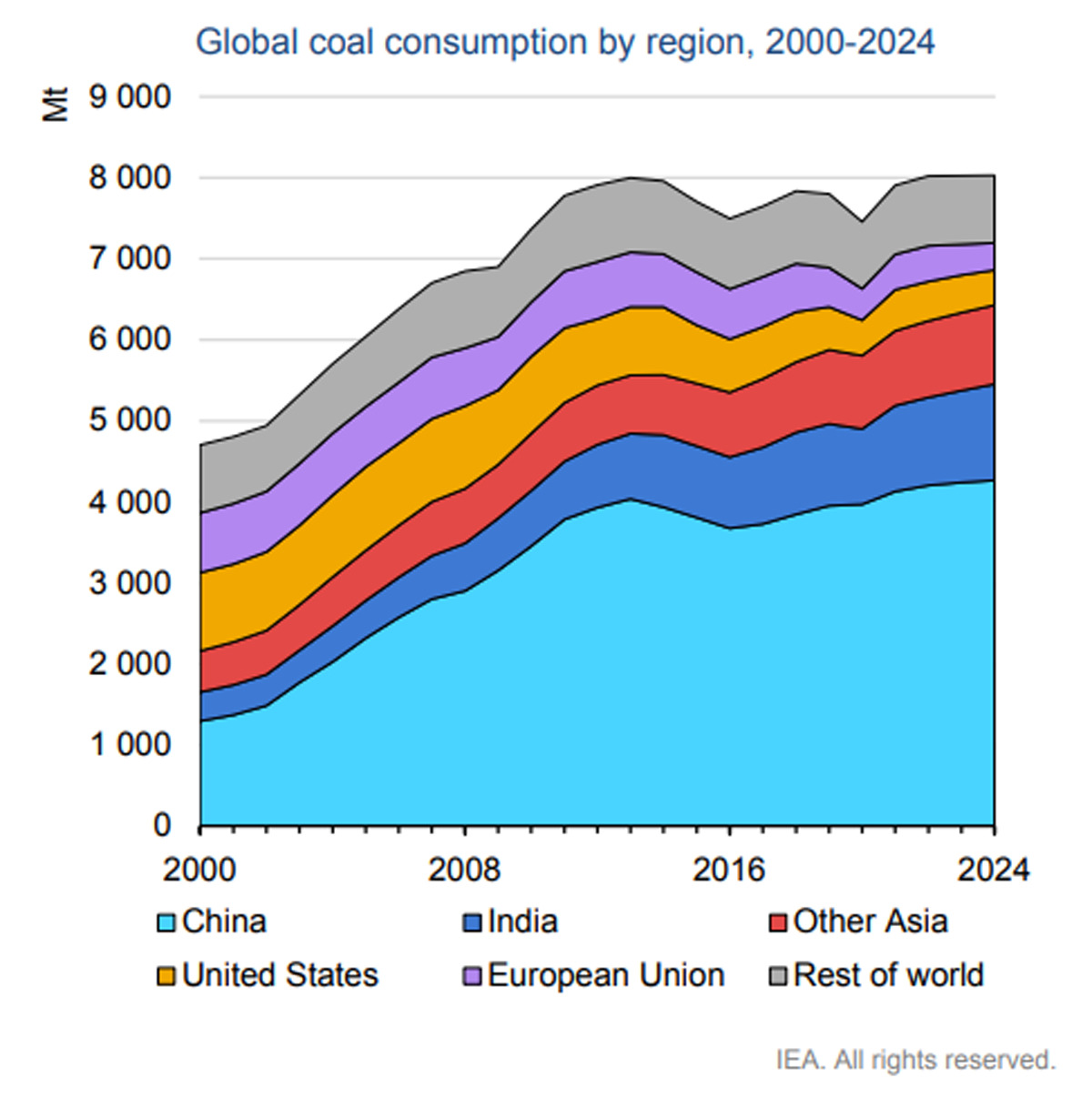 The West’s wasteful efforts to lower emissions amount to less than zero. Not “net zero” but “minus zero” as far as results are concerned The IEA, now the voice of the Great Reset rulers, reports the following, in fact:

“Coal is the single largest source of global carbon emissions, and this year’s historically high level of coal power generation is a worrying sign of how far off track the world is in its efforts to put emissions into decline towards net zero.”

Yes, we have no net emissions reductions, because, just as has been the case in Europe, the intermittency, indispatchability and unreliablility of uneconomical green energy schemes at the heart of the climate games can’t get the job done. Our elites won’t admit that, of course, because that would give the climate games away. The Chinese communists play the word games, too, but only with us. What they really believe and what they’re doing is revealed in light blue above. Their energy policy is to burn coal while burning “green energy” into our wine-soaked minds as we toast our own superior environmental virtues. Here are some more admissions from the ever politically correct IEA (emphasis added):

“The 2020 collapse in coal demand turned out to be smaller than anticipated.”

“The declines in global coal-fired power generation in 2019 and 2020 led to expectations that it might have peaked in 2018. But 2021 dashed those hopes. With electricity demand outpacing low-carbon supply, and with steeply rising natural gas prices, global coal power generation is on course to increase by 9% in 2021 to 10 350 terawatt-hours (TWh) – a new all-time high.”

“Coal production is set to rise to its highest ever levels in 2022.”

“The pledges to reach net zero emissions made by many countries, including China and India, should have very strong implications for coal – but these are not yet visible in our near-term forecast, reflecting the major gap between ambitions and action.”

Why are natural gas prices steeply rising? Because Biden’s controllers are using every tool in their arsenal to restrict fracking, prevent pipeline infrastructure development and otherwise make natural gas development more difficult and expensive. Europeans, of course, were ahead of us all on that and so our LNG has become more in demand and also forced up prices.

As for that supposed “gap between ambitions and action,” if you imagine China has any ambition other than crush the West and issue such lies as may be helpful to make it subservient to the Chinese Communist Party, you are an idiot or a Chinese shill.

This the reality behind the climate games, which serve no purpose but to enrich elites and further their control over the rest of us. If you doubt that, try to understand why Europe gives private jets and yachts a free ride on emissions. Or, why the Biden corruptocrats gave a half-billion to a phony solar project.

This is why use of coal for power generation is the highest it’s ever been and the longer the West tries to play its climate games and discourage natural gas, the higher coal will go. And, as for emissions, just forget about it. That was never the goal of the climate games anyway.