Climate Policy Mostly the Root of Our Current Evil

Climate Policy Mostly the Root of Our Current Evil

[Editor’s Note: Climate policy is clearly foremost in what is driving the Biden administration to do absurd things, destroying not only oil and gas but also the middle class.]

President Biden’s climate policy is not “the root of all evil,” but it’s close. Instead of improving the earth’s climate, it is causing or at least substantially worsening several economic and national security problems.

Biden’s climate policy seeks, as he stated during his campaign, “to end fossil fuel …” To do this, he is regulatorily strangling U.S. fossil fuel production. 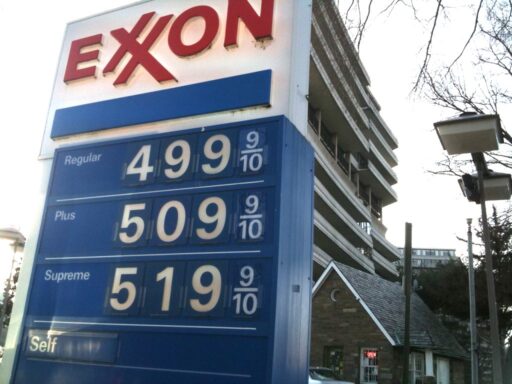 Biden’s restriction of U.S. oil production has driven the price of West Texas Intermediate sharply higher. It was $51.56 a barrel in January 2020, when the economy was humming before the pandemic, and about $50 in December 2020, the month before Biden took office. By January 2022, Biden’s actions had pushed it to $88.15. A month later, Russia launched its war against Ukraine and sent the price over $100.

Diesel fuel and jet fuel prices also are sky high. They raise prices for everything shipped by trucks and planes, as well as for airline tickets.

There’s more. Plastics and many other materials are made from petroleum. High oil prices raise costs of production and prices for everything from laptop computers to Patagonia vests to, perhaps of greatest current importance, fertilizers. High fertilizer prices, of course, raise food prices.

The consequences resulting from Biden’s restriction of U.S. natural gas production may be even worse. The price of natural gas price has tripled, from about $3 per million British thermal units in June 2021 to about $9 by May 2022. This has raised not only utility bills but also prices of goods manufactured by gas powered plants.

But higher prices may not be the worst of it. The longer-term climate campaign against natural gas use has resulted in utilities having less power-generating capacity. This, the Wall Street Journal recently reported, has led electric-grid operators to warn “that power-generating capacity is struggling to keep up with demand, a gap that could lead to rolling blackouts during heat waves or other peak periods as soon as this year.”

High oil prices resulting from U.S. production restrictions have been increasing the money going into Putin’s war chest. Reuters reported in April that, notwithstanding U.S. and international sanctions, “Russia expects to earn $9.6 billion more in April due to high oil prices” than it had planned before the sanctions.

Restrictions on U.S. natural gas production can only reduce the amount of liquified natural gas available to ship to European nations desperately searching for natural gas to lessen their dependence on gas from Russia.

Appeasing Iran’s terrorist regime by having the U.S. return to the 2015 nuclear deal has been a central tenet of Biden’s foreign policy since his first day in office. But high oil and gasoline prices have further encouraged Biden’s desire to make this dangerous deal – because he knows that returning to the nuclear deal would allow the U.S. to drop sanctions on Iranian oil sales.

Biden’s recent overtures to the oppressive Maduro regime in Venezuela similarly appear to be motivated by a desire to end sanctions on that regime’s oil sales, have it produce and sell more oil, and lower oil and gasoline prices.

Perhaps the most tragic aspect of Biden’s horrendous climate policy is that not only is there zero scientific evidence that it will have any significant impact on world carbon emissions or global temperatures, the scientific evidence is strong that global warming is not harmful and instead is beneficial.

Data from three studies published in The Lancet in May 2015, July 2021, and August 2021 show that global warming saves lives. These studies by three groups of scientists from around the world, who analyzed millions of deaths in numerous countries over recent decades, tell us that that cooler temperatures kill several times more people than warmer temperatures. The implication of these studies is clear: a warmer planet saves lives.

Data from EM-DAT – The International Disaster Database (presented by University of Oxford economist Max Roser and researcher Hannah Ritchie) show that, even as the earth’s average temperature has risen by 1.11 degrees Celsius since 1920 and world population has quadrupled from less than two billion to almost eight billion during the same period, the number of people killed each year by natural disasters since 1920 has declined by over 90%.

The number of hurricanes has not increased with global warming. A 2021 U.S. EPA report states: “The total number of hurricanes (particularly after being adjusted for improvements in observation methods) and the number reaching the United States do not indicate a clear overall trend since 1878.”

More land also is not being burned by fires as the earth has warmed. Environmental statistician Bjorn Lomborg has presented data from the Journal of Geophysical Research: Biogeosciences, Remote Sensing of Environment, and Earth’s Future showing that the percentage of global land burned per year in 1905 through 2020 and most of 2021 has been declining.

Finally, any economic harm that global warming may eventually cause likely will be negligible. An August 2019 National Bureau of Economic Research working paper (published in December 2021) estimated that world GDP in 2100 will be 1.07 percent lower in 2100 than it would otherwise be if the earth’s temperature rises by 0.01 degrees per year through 2100.

In the extreme case, the working paper estimated that world GDP will be 7.22 percent lower in 2100 than it would otherwise be if the planet’s temperature instead rises by 0.04 degrees per year (almost four times the actual rate of increase since 1920).

This may sound like a big deal, but a little context shows that if it happens it will be insignificant.

With just a 2 percent per year increase in world income per person from the 2020 level (without accounting for any reduction as a result of global warming), in 2100 world per person income will reach $53,269 (adjusted for inflation). The NBER working paper’s 1.07 percent reduction would lower this number to $52,699. The working paper’s extreme 7.22 percent reduction would lower it a bit more, but would still leave it at $49,423 – about five times today’s level.

Reposted, with permission, from Master Resource, where David M. Simon is a contributor.